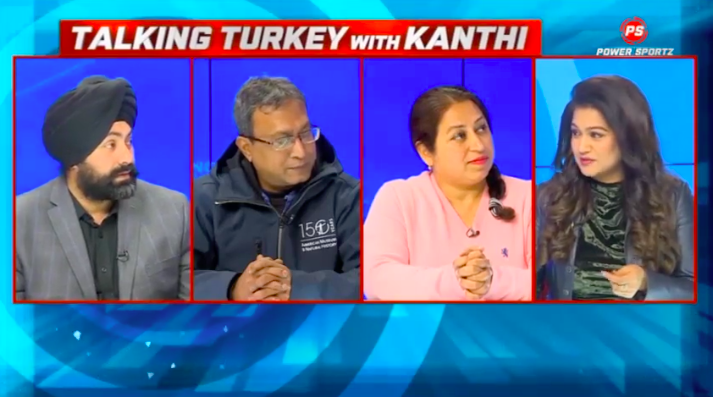 After watching the latest Talking Turkey with Kanthi show, all of you must be pondering – what made Ms. Kanthi D Suresh, Editor-in-Chief, Power Sportz target Haryana on the channel? That too when she is married to an IAS officer of the Haryana Cadre itself.

Immediately after she exposed Haryana Sports Federation on Friday on her flagship show Talking Turkey with Kanthi, audience seemed to be trying to figure out the reason why Kanthi targeted Haryana on her show.

Of course, we all know that Kanthi possess all the courage to speak the truth and that’s what she did this time also, when she brought forth one more underlying scam prevailing throughout the sports federations across the country. Remember, a couple of weeks back, she had also exposed Match fixing where a bookie had explained on the show, how it works

Ms. Kanthi along with her team executed a sting operation in which she found that sports federations across the country are issuing fake sports certificates. Let me tell you these certificates are further presented by the candidates at the time of their interviews in colleges during admission or at the time of their appearance in a permanent job interview. I am sure you all are aware that sports certificates play a significant role in an interview and candidates get great amount of relaxation upon presenting them.

The most shocking of all is the cost of getting these fake certificates – It is just INR 7000/-, which means you can simply get 10% or may be more relaxation at any interview and get the desired profile. But the question here is – Who are the people behind the scam or how big is this nexus? Because the functionality of this mafia would be nearly impossible without the indulgence of people sitting at the top levels in sports federations. And that’s how Haryana Sports Federation’s involvement came into the picture – When a Director Sports on the last day of his position issued a sports certificate for his own son to get him into a permanent Group A Level job (Grade 1 job).

However, Kanthi has exposed them all in the latest episode of Talking Turkey with Kanthi. Besides, she has also revealed the Modus Operandi used while issuing these forged and fake certificates.

Kanthi, known to be fiercely independent has her own identity. It seems like she’s unfazed with rumours that give different reasons for the show!!!  She has her focus loud and clear.