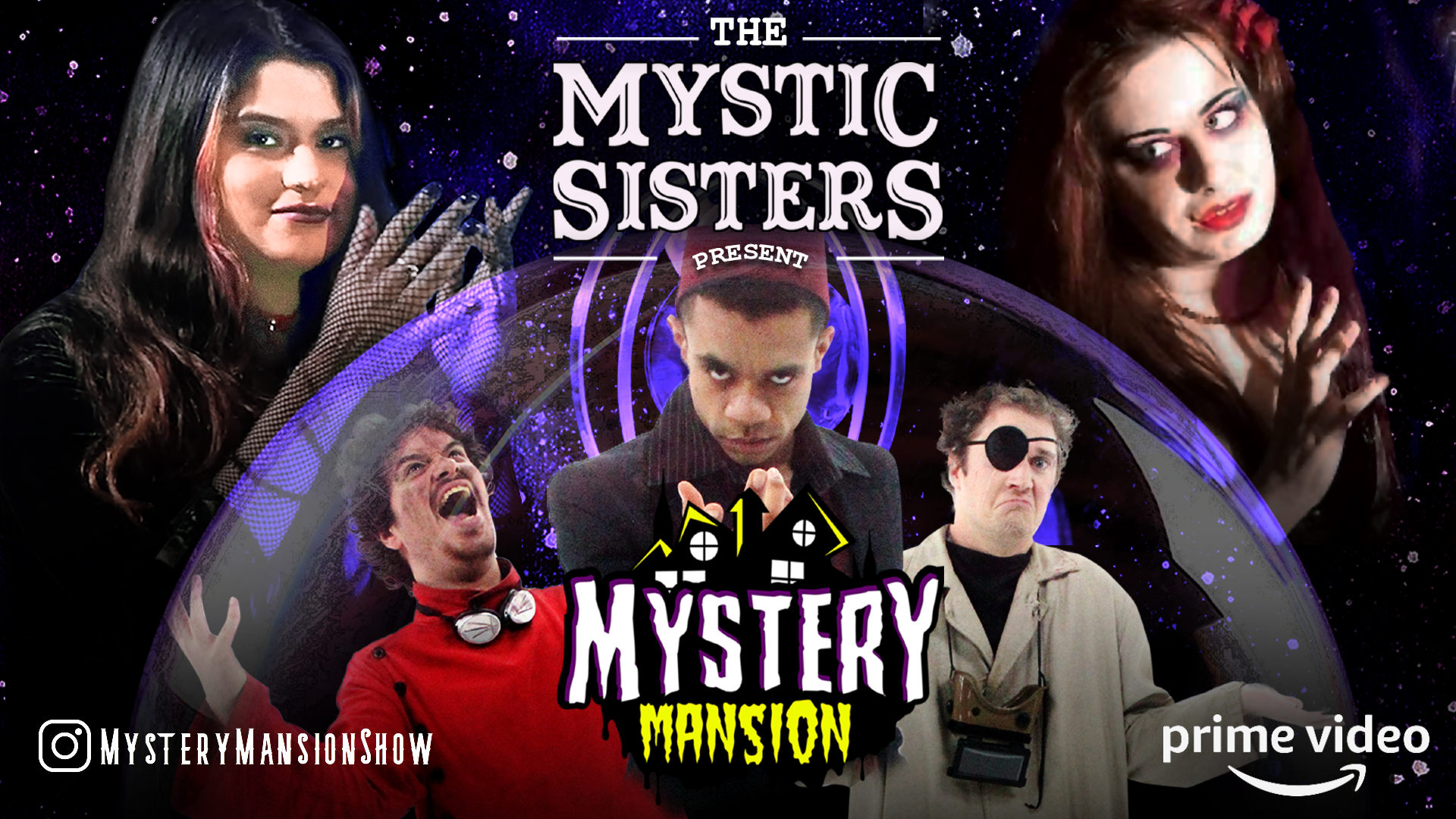 For the majority of the people around the globe, 2020 was all about staying in, keeping safe, and most importantly, binge-watching all the good movies that have been released in the 21st century. As the pandemic continues to limit our exposure to cinemas in 2021, people are still on the hunt for good movies to watch from the comfort of their homes.

If you are looking for a unique film to rejuvenate your spirits, we have got just the film for you. Released on Amazon Prime Video in January 2021, The Mystic Sisters Present: Mystery Mansion is a horror-comedy film that has everything you need to get a fresh perspective on the classics we all love and cherish.

After watching Mystery Mansion, we had some questions for the cast & crew of the movie. So, let’s dive in and see what creators Mike Handelman, Isaiah Mueller, and Hunter West had to say about their award-winning film.

WHAT WAS THE MOST CHALLENGING ASPECT OF BRINGING MYSTERY MANSION TO LIFE?
Mike: By far, it was post-production! We knew the jokes and performances were there, but whereas in live performance, the energy exchange with the audience dictates the timing of jokes, in the film, it’s the editing and rhythm of the cuts that creates the comedic flow. So, we spent hours going over the footage and trying different combinations and timings to find the perfect balance.

LOOKING BACK, DO YOU THINK YOU WOULD CHANGE SOME DETAILS OR SUBPLOTS OF THE FILM?
Mike: We actually did make one significant change in between the festival run and releasing the film to the public, and that was the animated prologue. It was our first time producing an animation, and after seeing it in front of audiences, I felt it could work better. So we ended up recreating the sequence from scratch with new art and animations that I’m very proud of.

HOW IS THIS MOVIE DIFFERENT FROM THE ONES YOU HAVE DONE IN THE PAST?
Isaiah: This project has been especially interesting for me because I don’t usually get to play characters like Mr. Horus often. This story takes place in an environment that is so heightened, it stands in direct contrast to a lot of the characters I’ve played in the past who tend to be grounded, down to earth people. There is a whimsy to this story that helps make this character really stand out for me.

WHAT WAS THE BIGGEST CHALLENGE YOU FACED AS AN ACTOR WHILE FILMING THE FILM?
Hunter: Wearing an eye patch and having special effects makeup on could be distracting at times, so I had to remind myself to really focus on doing well in the scene.

Mike: For me, it was turning on and off the writer/producer part of my brain, thinking about what we’d be shooting next, if we were getting the right coverage, staying true to the script, and doing it all before we ran out of time for the day!

WALK US THROUGH THE CREATIVE PROCESS THAT WENT INTO CONCEPTUALIZING THE CHARACTERS.
Isaiah: Initially I knew that I wanted to present characters that were in direct philosophical conflict with each other. Mr. Horus is a man of magic and mysticism while Professor Decay is a devout man of science and intellect. How do those two people coexist? Where do they disagree and where do they see eye to eye? All of these questions were really interesting to us, I just loved the volatility that happened when we bounced Horus and Decay off of each other while Dr. Ghoul’s chaotic energy added to the dynamism.

IN AN ALTERNATE UNIVERSE, WHICH ACTOR WOULD YOU CHOOSE TO PLAY YOUR ROLE IN THE MOVIE?
Hunter: We don’t need an alternate universe to get Matthew McConaughey to play Dr. Ghoul. Come on Matthew, I know you’re reading this.

CAN YOU TALK A LITTLE BIT ABOUT THE DIVERSITY IN THE CAST AND CREW, AND WHY IT WAS SO IMPORTANT?
Isaiah: Having a diverse creative team added to the dynamic nature of the show. It is rare to find genre stories that are told by people from the LGBTQ community. Growing up, I loved horror, fantasy, and sci-fi but would hardly ever see anyone who was gay or looked like me… not anyone who survived through the movie at least. So it’s refreshing to now fully embrace diversity in front of the camera as well as behind it.

AS THE DIRECTOR, WHAT WAS JOE WHELSKI’S APPROACH TO BRINGING THE FILM TO LIFE?
Hunter: Joe did a great job of grounding the film. As chaotic as the plot is, Joe really helped us focus on the relationship between the characters, and it really shows.

Mike: Joe shares a love for and has a deep knowledge of the influences we were bringing to the project, things like Young Frankenstein, but also classic British shows like the original Dr. Who. He’d also recently directed an award-winning indie feature, “Yellow Scare”, that was in black and white and had a similar Mel Brooks style flair, so he understood those shooting techniques and also how to shoot fast and furious, which for an indie production is key!

CAN WE EXPECT TO SEE A SEQUEL IN THE FUTURE?
Isaiah: I think we would all love to make a sequel and expand on this world and our respective characters. There are a lot of avenues we could go down and we definitely have ideas. So while we may not have immediate plans, it is by no means off the table, there are endless possibilities within the Mansion.

MYSTERY MANSION HAS TURNED INTO AN AWARD-WINNING FILM. WAS THIS SOMETHING YOU EXPECTED WHEN YOU WERE MAKING THE FILM?
Hunter: We honestly just tried to create the best piece of art that we could. Everything that has happened after is just a bonus.

WHICH CLASSIC MOVIES WERE THE INSPIRATION BEHIND THE FILM?
Hunter: Evil Dead. Young Frankenstein. Gremlins. So many!

Isaiah: The Dark Crystal. Seeing it at an early age left a huge impact.

Mike: This is a modern-day classic, but for me, the original movie version of What We Do In The Shadows was a huge inspiration.

IF GIVEN THE OPPORTUNITY TO GO BACK IN TIME, WHAT WOULD BE THE ONE MOVIE EACH OF YOU WISHED YOU HAD MADE?
Isaiah: Well, I’d never want to remake a self-serious masterpiece so I think I would choose to make my own version of “Return of the Living Dead” I love that movie, and I’d have a blast working with all of the punk rock zombies!

Hunter: I wish I could take credit for the Ernest movies.

AFTER MYSTERY MANSION, WHAT KIND OF MOVIES DO YOU HOPE TO CREATE IN THE FUTURE?
Hunter: Comedy has always been a focus of mine but I am open to anything.

Mike: I’ve written a feature film script that’s a combination between Black Mirror and The Odd Couple that I hope to produce when it’s safe to do so.