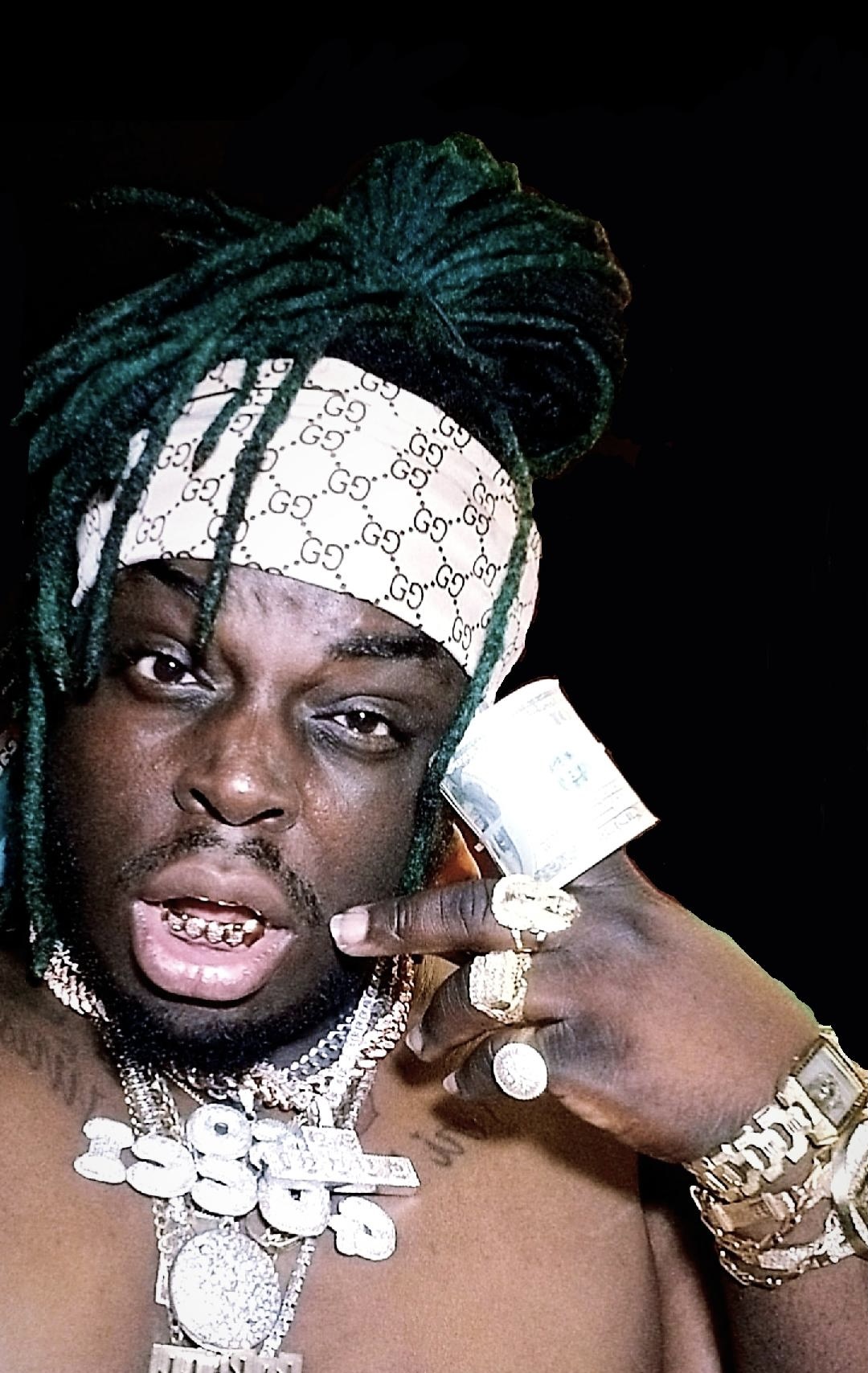 He puts his versatile approach to song making on full display all throughout this new single (“Ella Loca 4dat Coca”) The talented rapper allows us to take a brief glance through his lens at where he’s at in life while still letting us rap along to the catchy lyrics.

The true gift of So’Gucci Montana is truly in his ability to structure his songwriting in a way that speaks directly to fans. When listening to the full song you will quickly relate to his experiences in life while turning up to the upbeat production and catchy melodies throughout the entire song.

His style of music creation is an exploitation of new genres and styles not seen commonly amongst newer artists. The way he is able to combine his melodies with his rapping ability at a high level is very impressive. The triple threat artist raps, sings and writes all of his music.

When speaking to the talented rising star he had a lot of insightful things to say about his music upbringing and what fans can expect from him. Take a moment to get to know the talented artist by tuning into his latest interview that we did with man himself below:

What’s up So’Gucci Montan, Welcome to ABOUT INSIDER! How’s everything going!?
Doing well, Excited for this interview thanks for asking!

Where were you born?
South Carolina

Where did you grow up?
In the city of Cayce, it’s a small-town west of the capital. After my father passed away, we moved around a lot. From Cayce, to Columbia, to Gilbert S.C. and then when I was 17, I ran away from home and went to my grandmother’s house in West Columbia S.C.  It was the same house my dad was raised in.

What inspired you to start making music?
What inspired me to start making music, Man… I’ve always have been a lover of music. I was on the sunbeam choir during my youth. Later in high school, I was on the Richland Northeast Gospel and Praise Choir, “GAP CHOIR.” When I was younger, my oldest sister Bev, and younger brother Tukie (Krook) we would make beats on my sister keyboard and record us rapping on cassette tapes. When I was 17 and we moved to Columbia, my brother and I along with Yung Dubble Dee, CBC The Young God, and Big T, we used to sit in Big T’s moms pool house and have long night freestyle cyphers. One night I figured out how to record tracks using sound recorder lol. Omg that was a time. When I ran away and ended up in West Columbia, my dad’s neighborhood was called, Oak Field, but later the younger generation called it O Field. we couldn’t figure out whether it was oak or old. but anyway, my cousin Scooter, Brian Dreher, and I set a studio in my mobile home, and we just knew we were going to be famous! I Can’t really say it was a major artist that inspired me. To be honest it was most of the people around me growing up. I guess, I can say Yung L.A. made a big impact. knowing we had been close in aga and watching him on BET made me tell myself one day him and I would do a song and turn up. Time out, what am I thinking… When Young Money hit the scene, I just knew I was going to be a part of their group.

At what age did you start making music?
I can say I started making music in 2011. I was 25. I had just moved back to Cayce and I had a studio built in my apartment. But I didn’t have the right software to record. Well, it just so happened that I had a cousin down the street that everyone was saying I should link up with because he raps, and he raps good. I was a dope boy at the time, so I didn’t have time to even entertain the idea cut I got to head to the trap. But one day my cousin Shadric was like, I’ll be right back. and he came back down the street and he was like, Gucci this is Pree, Pree, this is Gucci. One of my neighbors just so happened to be over that night as well. We started having a freestyle battle with each other. after me and Pree got a feel for each other he let me know he had Protools. Bruhhhhh??? it on and popping since.

When did you release your first song?
I released my first song “officially” 2019 on my sister Rae Darcell’s bday August 19th. She’s been one of my biggest motivators to keep pushing and to keep grinding. she’s 2 years older than me and all the homies call her Big sis and will go to war for her now. its savage. The song is called “DO A SPLIT AND POP IT” the beat was produced by VYBEZ BEATZ.

If you could go open a show for any artist, who would it be and why?
I’ve opened for a couple mainstream artist including Yung L.A., Mary Mary etc. but id love to open for Lil Wayne or Meg the Stallion. I know I could match their energy. My music genre I call it “TWERK TRAP” I LOVE PARTYING, AND WATCHING GIRLS MAKE THEY BOOTY CLAP!! so I make music just to make them do that. I know how Meg have these ladies. She empowers them to love themselves as individuals and unapologetically you. And they hit the dance floor and go hard when her beats drop!!! But the way I rhyme, I love doing punchlines and keep it metaphorical. it’s just a lil more interesting to me. And if you can tell a story and keep you listeners Intune then they’ll love it. I love when people must play my music back just to catch a missed punchline. And that’s what I admire about Lil Wayne. the music is so creative, and I love how he will have live music, and a DJ. Having that energy behind you mixed with energy from the crowd, I know that must feel amazing.

Where do you see your music career in 5 years?
5 years from now, I honestly couldn’t tell you. I live for the moment, and I plan as I go. I admire the direction 50 cent has gone in and I’ve been in talks with different people about start some shows. I live a very entertaining lifestyle aside from my everyday 9 to 5. I know when to turn it on and turn it off, But I guess I can see myself investing in bigger and better collaborations in the future and seeing where the investments will take me. Maybe me and my bro Sauce Lord Teddy P might open a club somewhere, we usually get super lit together in every country we visit. #BenWildnBoyz

What would be your dream collaboration?
Well, my initial dream collaboration was to do a feature with Yung LA… did that. I’m working on a track called Tattoos & Good Pussy which will feature Fabo from D4L. I plan on getting in touch with Big Lex booking for a track I’m writing called “SUPER SUPER” that I want to collab with her on.  But I guess with this new era, I’d love to collab with Meg. I think we’d complement each other.

Who produces your music?
Currently, I’ve used VYBEZ BEATZ, BEAT DEMONDS, TWAN BEAT MAKER, and usually mix down my own tracks. Or Pree, he’s a beast on Protools. For my song SMOKE feat YUNG L.A., we used, Diezal on the Beat to mix down and master the track. I know a lot of producers.

When its all said & done what do you want to be remembered for with your music?
When it’s all said and done, I want me, my siblings and my friends to look back remember how much fun we had doing it. we can go back and watch the old footage and pick on each other. I started this journey to be able to travel and do music around the world and I’ve done that just in a couple years. I guess, I just want people to say, He did exactly what he said he was going to do…

All the lyrics on his latest single are connected by production and message in the music, and each lyric will make you want to listen to the next one that follows. If you wish to listen to it, we leave you with a link to the album so you can experience this audio adventure for yourself!

To know more about So’Gucci Montana don’t forget to follow him on Instagram: @soguccimontana and you can listen to his latest track “Ella Loca 4dat Coca” here:

In-Demand Jobs Over the Next 10 Years

Your moment is your own and you decide what to do with it. Desiree Schlotz drops her new track “Bali”