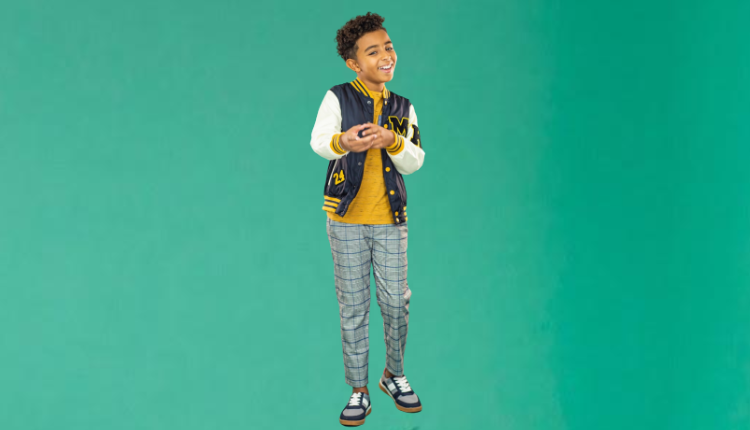 CAN YOU TELL US A LITTLE BIT ABOUT YOURSELF, WHO IS MICAH ABBEY IN YOUR OWN WORDS?
Micah Abbey is…a normal kid from Columbus, Ohio who fell in love with the art of acting. I am just like any other kid. I go to school, hang out with friends, play sports, I have chores and screen time limits. The only difference is: it’s like I play a travel sport and a lot more people get to watch my “game”.

HOW DID YOU GET YOUR START AS AN ACTOR? WHAT WAS THE AUDITION PROCESS LIKE FOR YOU ON ‘COUSINS FOR LIFE’?
Well my sister was actually the first one to do any modeling. When she signed with an agency in Ohio, they wanted to sign me too. I was 4 ½ years old. My first job was for a regional cellular company. They said I did so great for the print shoot that they wanted me for the commercial too. I really liked it so I kept doing it.  Even though I retired when I was six because I didn’t always like driving three hours away, I loved it so much that I came back. [laughs] My first audition for Cousins for Life was actually on tape because I was still living in Ohio.  I was so excited to think about actually having a pig as a pet!!! I had a couple call backs.  It was crazy because one of the last ones, we had another audition first and my mom’s car got towed so we had to take an Uber.  I guess that ended up being good luck. After callbacks, I had a chemistry read with the dads that were up for the role.  Ron G and Ishmel were both my favs so I was happy to see them at the final chemistry read where I got to meet Dallas and Scarlet who were already cast.  I was so nervous, but I was happy because it was so much fun.  I had a really good feeling when I left that last audition because I kept going back in for more and the people in the room were laughing a lot.  I did not sleep that night because I was so excited.  I found out the next day I booked it. It was the first time I ever cried tears of joy.

I’M SURE YOU PROBABLY GET ASKED THIS QUESTION A LOT, BUT I WANTED TO HEAR STRAIGHT FROM YOU: WHAT GOT YOU INTO ENTERTAINMENT INDUSTRY? WHAT MADE YOU WANT TO BE AN ACTOR?
I kinda got in by accident. I was too young to even know what it was but my mom thought it was good for “life skills” and confidence in talking with adults. I started paying attention to other actors in commercials and shows and movies, and just thought it was so cool. The more I auditioned, the more confident I felt in what I could do.  I started to see acting more as a passion instead of just something to do on the side for fun.

IF YOU COULD PLAY ANY ROLE, IN ANY MOVIE OR TV SHOW, WHAT WOULD IT BE?
My dream role would be Miles Morales in Spiderman. To be part of the Marvel Universe is probably one of every actor’s dreams.

WHO INSPIRES YOU AS AN ACTOR?
I think Daniel Kaluuya is pretty awesome, but there are a lot. I feel like there are so many great actors and especially African American actors that I have to look up to. I feel right now I just like to appreciate a film or a show and how certain actors are in that role that I am watching. I don’t always want to focus on just one individual but the whole production and how the actors combined make it so good.

HOW DO MANAGE TO BALANCE SCHOOL AS WELL AS THE BUSY LIFE IN HOLLYWOOD?
Well, my mom really helps keep me motivated and on track. It is hard sometimes, and can be stressful, but I know how important education is so I stay focused to do my best.

YOU DO LOTS OF THINGS OUTSIDE OF SCHOOL! DO YOU KNOW WHAT YOU WANT TO BE WHEN YOU GROW UP?
Well up until recently I really wanted to be an engineer, but I am rethinking that. I have worked with some awesome directors who have inspired me to maybe do that.  I want to do acting no matter what, but always keep my mind open to just have anything possible. But my mom’s rule is, that I go to college and I agree it’s a good choice for me.

HOW IMPORTANT IS DEVELOPING A PERSONAL STYLE WHEN IT COMES TO ACTING?
Right now I am still so young that I need to develop in more roles to build a style, I guess.

YOU HAVE BUILT UP A FOLLOWING ON INSTAGRAM, HOW HAS SOCIAL MEDIA HELPED SHAPE YOUR CAREER AND PERSONAL BRAND?
Social media is not always the best with positivity, so I really try to stay away from all the negative stuff. I try to just make someone smile. I have also met some really cool people who are great for networking, but they are just awesome, kind human beings. I just want to make sure I keep good vibes.

WHAT ADVICE WOULD YOU OFFER TO SOMEONE STARTING OUT AS A YOUNG ASPIRING ACTOR?
Don’t let one “no” change your whole life.

ANYTHING ELSE YOU WOULD LIKE TO SHARE WITH YOUR FANS AND OUR READERS?
I am grateful for all the support and opportunities so far, and I just can’t wait to see what is next.

DJ Rebuttal Explains Why 2022 Will Be His Year