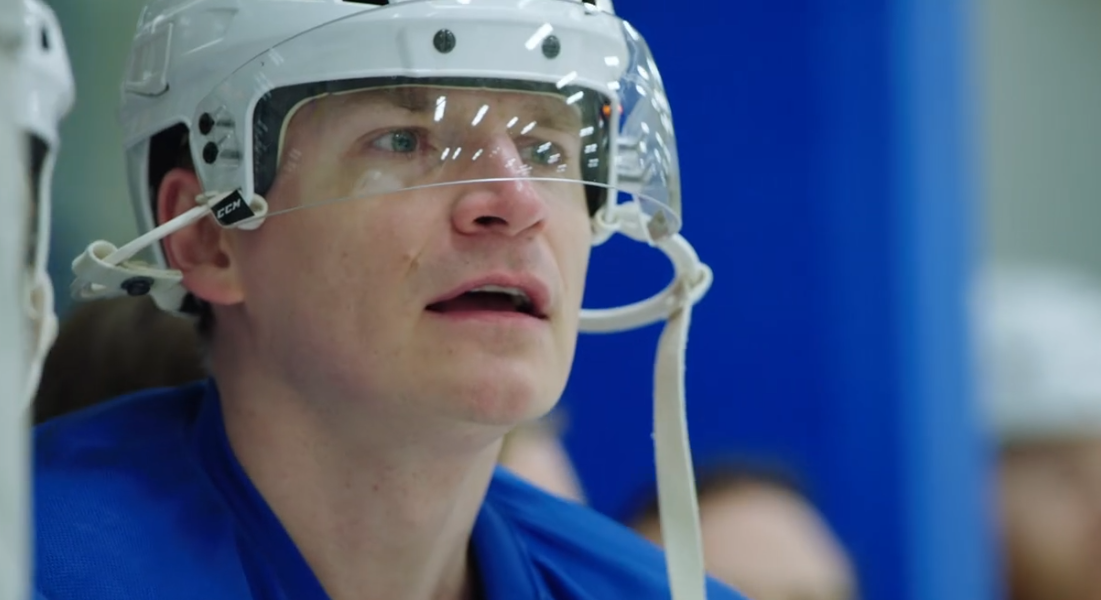 HEY KAZY! THANKS FOR TAKING TIME TO CHAT WITH US! PLEASE, BRIEFLY INTRODUCE YOURSELF. WHO IS KAZY TAUGINAS YOUR OWN WORDS?
Hi! Hmmmmmm. Who IS Kazy Tauginas? I would categorize myself first and foremost, as an artist. Acting, filmmaking, writing, even drawing are all my happy places. When I’m doing any of the above, it’s as though time doesn’t exist. I’m definitely a dreamer. If I wasn’t, there’s no way I would even be doing this interview right now. Really, the dream is just the starting point. Breaking down those dreams into achievable goals has been a method of operation in my life for a long time.  Surely, I’m what many would consider a cautious optimist. I’ve always felt that I’m a “there’s always hope” kind of a guy. As I’ve gotten older, I’ve realized how important it is for art to exist in our culture. I feel it’s necessary to use one’s talents to make the world a better and more tolerable place. My work is my legacy and I want my legacy to leave an impact. Film as a medium, can literally be used as a way to educate, enlighten, bring about emotions. Film is a powerful tool that can be used to help bring about necessary change, not only in our society but to the entire planet.

HOW DID YOU GET INVOLVED IN ACTING?
I’ve always been passionate about film. I was an only child and became an avid movie watcher when I was very young. Growing up in the midwest, I never thought of filmmaking as a viable career path. I wouldn’t have even known where to start.  Fast forward years later, while attending the University of Delaware, I took a theatre class as an elective and I loved it. Looking back, my two favorite classes in college were both electives, Scriptwriting and Theatre. Post graduation, through a series of random events, I came to own a 24 hour diner. Towards the end of my run in the restaurant industry, a filmmaker asked to use my diner to shoot a commercial for the Heinz Ketchup commercial contest. Being a film fan, I obliged. One of their actors was a no-show. They asked me to fill in. I gladly did. After they wrapped, the director mentioned to me that I was “really good and that I should be an actor”. That thought never left me. In 2008, I could sense that my run in the restaurant industry was coming to an end. My landlord and I couldn’t see eye-to-eye on a lease renewal so I started considering alternative career paths. That summer, I attended an open house at the New York Film Academy in Manhattan and when I walked out, I was sold. I took out a student loan while my credit was still decent. The diner closed its doors forever in Nov of 2008. January 2009, began the NYFA Acting for Film program and graduated the following fall. I never looked back. Going back to school to follow my dream was the best decision I’ve ever made.

TELL US A LITTLE ABOUT YOUR NEW MOVIE “ODD MAN RUSH”. HOW WAS IT WORKING WITH SUCH A GREAT CAST?
I would call “Odd Man Rush” a story about love and hockey. The film stars Jack Mulhern, Dylan Playfair and Trevor Gretsky. I have a small but fun supporting role as Dumi, a Lithuanian hockey player who Jack Mulhern’s Bobby meets while playing in a Swedish Professional Hockey League.  I honestly loved working on this film. The Slater Brothers who produced the film came from a hockey background.  The screenplay was written by Bill Keenan, also the author of the book, “Odd Man Rush”. I think they were really able to assemble a team that would give the film an authentic hockey feel.

I had a blast working with Dough Dearth (the director). He was very collaborative and gave me the freedom to adlib. With his blessing, I was really able to make Dumi an extension of myself.  Regarding the cast, I think it took a total of twenty minutes once we all met to start feeling like a team. Imagine a group of actors, shooting a film upstate New York, in a college town. It was madness! But seriously, I really enjoyed working with everyone on board. Jack was born to play Bobby. Dylan brought his comedy/hockey A-game. Trevor is such a natural talent. I’ll miss my late night trips and crazy insta-stories with my buddy Bjorn Alexander who played Klas. I honestly wish we were making an Odd Man Rush trilogy!

HOW DIFFERENT IS IT TO ACT IN A MOVIE AND TO ACT IN A THEATER PLAY? AND WHICH ONE DO YOU PREFER?
Film and Theatre are very different mediums. In film, you have the magic of editing. You have multiple takes to get it right. In theatre, you have one shot to get it right – which is an amazing rush. I love performing. I love being in front of the crowd and feeling the energy from the audience. With that said, overall, I prefer film. The primary reason being, film is forever. It’s a tangible thing that can be seen over and over until the end of time. There’s a bit of satisfaction in that idea. No one can ever take it away and it will live on long after I do.

WHAT ARE SOME OF THE DIFFICULTIES OF THE ACTING BUSINESS?
The challenges of acting are a’ plenty. I would say the biggest challenge for most actors is finding validation. Our industry is so incredibly subjective. Subjectivity is never a pleasant thing, no matter what your career path.  EVERYTHING in entertainment is subjective. Our agency. Our management.  Our familial industry relationships. Our looks. Our voice. Too big, too short, too tall. Wrong color hair. Hair style isn’t right. “Great actor, but those ears, it’s distracting.” The list goes on and on. Agents judge you. Casting directors judge you.  You book the job, the director judges you. When the product is done, the critics and audience judge you. So I think it’s really important for actors to stay mentally strong. I also think it’s really important for actors to take as much control of their careers as possible. This means, writing, possibly directing, producing, networking. Being as proactive as one can be. Just stay true to yourself. At the end of the day, you have to tolerate that person in the mirror looking back at you.

WHAT’S CHALLENGING ABOUT BRINGING A SCRIPT TO LIFE?
Well, you want your script to be good. That’s always a great start. But outside of creative issues, I would say “funding”. Making an entire film is a bit more of a financial investment than drawing in a sketchbook. There are so many moving parts. You have to find a compelling enough story and capable team so that when the time comes, people will have faith in you to make a worthwhile product. For myself, I utilized kickstarter to independently produce “Standing Eight”. The story was about a boxer who was forced to retire after being diagnosed with Lupus. The film was funded by two kickstarter campaigns which meant a couple of hundred people had enough faith in our story to see it come to life.

WHAT IS YOUR MANTRA TO NOT GIVE UP IN LIFE AND NOT TO GIVE IN TO ANY PEER/EXTERNAL PRESSURE?
My favorite quote comes from Muhammad Ali. I’ve carried it with me for years. “I know where I’m going and I know the truth. I don’t have to be what you want me to be, I’m free to be what I want.”

IF SOMEONE IS GOING TO MAKE YOUR LIFE INTO A MOVIE, WHO WOULD PLAY YOU?
Danny DeVito. No other possible choice.

WHAT DOES IT MEAN FOR YOU BEING AN ADVOCATE?
Lupus has been affecting my family’s life since before I was born. My mother has spent over forty years battling the disease and my father has been by her side. When I made “Standing Eight”, I did it as a way to support her and raise awareness for her condition. Lupus can still be deadly to this day and affects more than 1.5 million people globally. Due to it taking 6 years on average to receive a diagnosis, I would suspect the number is actually much higher.  “Standing Eight” became more than a film. We won numerous awards, but after the Lupus Foundation asked to promote the film, it became something more. Having the film used as a way to raise awareness is really the perfect end point for the project. Through the Lupus Foundation, I’ve met so many people who are affected by the disease. I’ve sat down with lawmakers in Washington DC and lobbied on behalf of the foundation for more money for research. I’ve been so blessed to have taken my mother along with me for this ride. I’ve seen so many different battles with Lupus outside of my family unit and it’s really been eye-opening. So I’ve devoted part of my life to serving the Lupus community. There is very little representation in pop culture and I aim to change that. I want to transform the way the public sees Lupus and bring understanding to the masses. With a little luck and a little nudge from God, I’m sure I’ll be able to make it happen utilizing film as the medium.

ANYTHING ELSE YOU WOULD LIKE TO SHARE WITH OUR READERS
Live your life for your future self. Many years from now, when you’re in a wheelchair and your best years are behind you, you can look back and say “I did it” with a smile.

Increased Heart Attacks in Young – A conversation with Doctor Integralist…