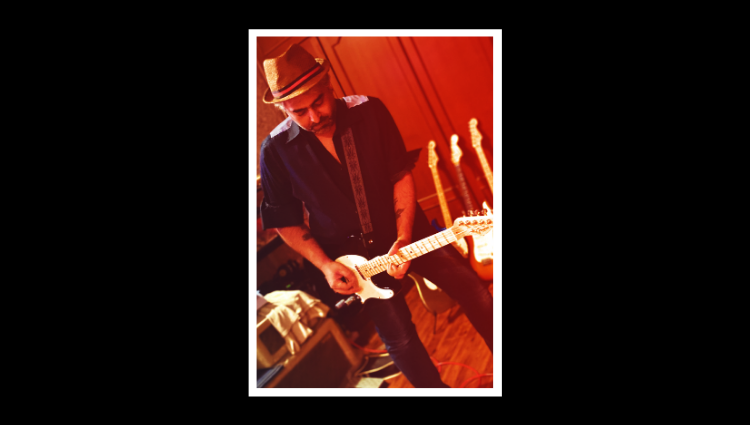 Izzie’s Caravan – Blues rock with an international flair. Led by the enigmatic guitar impresario, Izzie, the Caravan is releasing one single every month for the next 10 months.

What drew you to the music industry?
Hi there. Honestly, I had no intention on joining the ‘industry’, so to speak. I had left music for a decade or so and it was purely by chance…or the love of guitars, I guess…that pulled me back into exploring the blues and writing and recording music. Part of the reason why I had left music was because it became an instrumental exercise to everything except ‘music’. Ironically, we could say its even worse now with everyone looking for the quick fix of viral videos…everyone battling for ‘likes’ and ‘subscriptions’ in this tragic post-modern culture. We’re honestly not about that at all. For us, it was responding to the void where a good mass of people are complaining, myself included, about the lack of elemental blues-rock bands anymore. So I figured might as well do something about it and make decent rock music that appeals to that particular audience.

Who are you inspired by?
I grew up heavily inspired by the sound of The Stones, old-school Aerosmith, Zeppelin and that genre of music. Growing up and being naive, I never understood the common denominator in all these bands was the blues. So it wasn’t until I really started understanding the blues at a musical and at academic level where I realised the beauty of it. Nowadays its all about listening to Clapton, Buddy Guy, Lightnin Hopkins, John Lee Hooker, Stevie Ray…and of course the great Johnny Winter.

Please explain your creative process.
Honestly, it can all start with a lick, or a riff, or a thought or a line of lyric that inspires me by something as simple and real as watching the news or someones story. From there it always seems that the song takes a life of its own. I have to have a story in there somewhere. Musically, I like the unorthodoxy that you often find in our songs. Different grooves, varying tempos…I like the dissonance it creates in the listener. It’s even more fun now having the band back together and Sim (vocals) and I will trade ideas…Roque (bass) who has a phenomenal ear for music will add his own touch and once the rhythm tracks are down, thats when I get so thrilled with the interchangeable dynamics that Robbie (keys) and I have with the keys and the guitar.

Is there a hidden meaning in any of your music?
Always! I always found music to be therapeutic and an exercise in escapism. Even doing this interview right now is appeasing for me where I can get away form the grind, so to speak. But yeah, I like storytelling and creating fictional characters who I believe I live vicariously through .Whether its in ‘Drownin’ Man’s Blues’ or ‘Whiskey Alley Blues’ or ‘Roadkill Rita’, I like the good underdog story because thats what we are as a band. Sometimes we can be far more direct like we are in our latest single which is releasing on October 10th called ‘Stick It To Ya’ which is in response to some pop artist Phoebe-something who in her own intellectually stifled way called a particular Blues legend’s music ‘mediocre’ and wrote some tacky lyrics about him in one of her songs. So yeah, we do use our music to make a point.

Please discuss how you interact with and respond to fans.
In all sincerity, we’re just trying to appeal to blues rock fans and we’re soon launching a campaign called ‘Caravan of a 1000 Blues’ where we want to build a community of fans who we can relate with in our shared interest of blues and rock music. We’re hoping to create open lines of communication and take them into our world of the entire writing and recording process, given them a whole bunch of unreleased stuff from covers to alternative versions of our songs for free, and just create a community where we’re all part of this journey. Hopefully it works out.

What is your favorite part about this line of work? Your least favorite? Why?
The favourite part of this journey is listening to the completed versions of the songs. It’s such a trip! What starts with a simple riff or an idea takes its own unique journey into becoming something so meaningful. It’s always the part that I live for most. The worst part is of course when somedays you feel like its a ‘job’ rather than just playing music and enjoying that experience.

Have you ever dealt with performance anxiety?
Absolutely! I actually suffer from major anxiety and I assure you its not a pleasant experience. I’m just glad that we’ve taken progressive steps towards realising that these are serious issues and we can openly have a dialogue about such psychological phenomena. However, it’s part and parcel of the business and ultimately you have to have a thick skin to get by.

What advice would you have for someone wanting to follow in your footsteps?
Be resilient and patient! Find and develop an organic fanbase and have the courage and conviction to believe in the music you write and expose to your audience. If you’re into the blues and good rock n roll, check us out at www.izziescaravan.com and join our rock n roll journey.