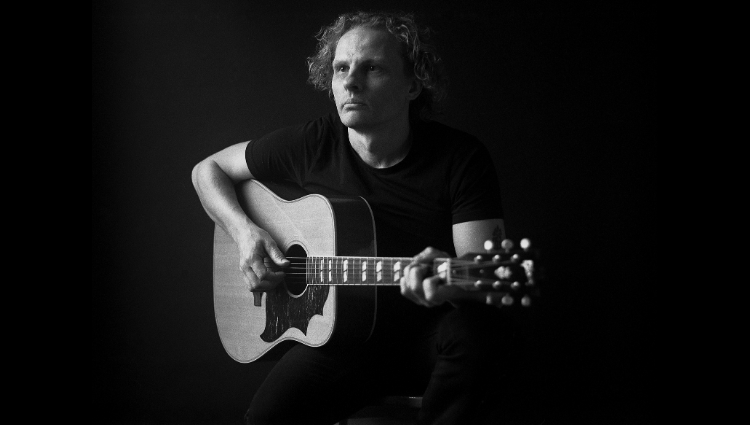 HELLO MAURI! SO GLAD YOU’RE HERE! LET’S START, CAN YOU TELL US A LITTLE BIT ABOUT YOURSELF, WHO IS MAURI DARK  IN YOUR OWN WORDS?
I am singer/songwriter, musician and professional visual artist from Turku, Finland. My birth name is Mauri Kosonen and I am born in 1978, age 42. I make dark folky, acoustic singer/songwriter music with a baritone guitar and a low voice.

TELL US ABOUT HOW YOU STARTED MAKING MUSIC?
At the age of 7 I started playing drums. I had heard the rock band KISS and seen pictures of them in their make ups. Their music and visuals struck me immediately. I think subconsciously I decided then I wanted to start a band. My first proper band started at the age of 16. I started to make lyrics. At the age of 18 guitar came along and I started to sing and make songs. From there guitar and vocals became my main instrument. During 25 years I have played in various bands and different music styles. Perhaps most well known is metal duo Mystons. Altogether I have played around 500 shows in Finland and Europe and my upcoming singer/songwriter debut solo album Dreams Of A Middle-Aged Man (released Dec 18 via EluccaArts) is my 9th studio album.

WHO INSPIRES YOUR PLAYING STYLE? WHICH ARTISTS CAN WE REFER TO?
I listen to different types of music. My main attractions are 70s and 90s music. My singer-songwriter music has a lot of influence from Leonard Cohen, Johnny Cash and Nick Drake, but also Pink Floyd, Neil Young, The Beatles and Tom Waits.

WHAT IS YOUR CREATIVE PROCESS LIKE? HOW DO YOU START WRITING A MUSIC PIECE? HOW DO YOU BEGIN YOUR CREATIVE PROCESS?
I usually start to play guitar and a song sketch comes out with a couple of lyrics lines and a rough idea. After playing it for a while I record the idea with my phone so I can return to it later. Then it is long process towards the final song. Sometimes I do it really quick especially if I am in a specific mood or something life-altering has just happened. With some songs it might take years for all the words and the arrangement and the right key to finalize. Thinking about the lyrics is also kind of philosophical process where I think about life a lot. I compare a song to a mathematical puzzle with the added layers of mood and emotions and a mystic factor. When all the pieces fall in to their place you know the song is ready. Also there is something primitive about the process, something to do with my gut instincts evolved in all the years making music.

CONGRATULATIONS ON YOUR NEW SONG, ‘DREAMS OF A MIDDLE-AGED MAN’. EXPLAIN THE STORY BEHIND IT.
“Dreams Of A Middle-Aged Man” single is a kind of middle-aged, daydreamy journey from changing baby-diapers to riding a motorcycle in The Lofoten Islands, Norway. My firstborn daughter was born and I started to make my debut solo album songs while learning to be to be a father and a husband. When changing diapers and nurturing the baby there was a lot of time to think about life, the past, the future, my dreams and of course song lyrics. I had just bought a really special 70s Gibson ES-175 electric guitar so the song came out of it. At the beginning it was in a higher key. I lowered it to suit my voice better and wrote several verses for it and then left the necessary ones in the end. Then there was a kind of freestyle, improvised part in the end about motorcycling in Norway, which is like free flow of thoughts in beautiful landscapes. It was a bit different each time I recorded it. The song is about a middle-aged man that has the ability to hang on to his dreams. Dreams give you a kind of emotional fuel to keep going.

WHAT ADVICE WOULD YOU GIVE SOMEONE WHO WANTS TO BE A SOLO PERFORMING ARTIST?
Nobody is better at being you than you are. Be yourself, that is what makes you interesting. Believe in yourself, even if nobody else does. Don’t copy, be unique, trust your gut instincts. People can smell things that are fake. Don’t expect miracle stardom, but work slowly, humbly and hard towards your goal and always give everything you got when recording or performing. These are also the things I keep telling myself all the time, because some time it is really, really hard. You just have to keep pushing and believe in your dreams.

LASTLY, WHAT ARE YOUR MUSIC GOALS FOR THIS YEAR, AND HOW ARE YOU WORKING TOWARD ACHIEVING THEM?
The rest of the year goes with promoting my upcoming singles, ”Thin Line Of Understanding”, released Nov 19 and ”Poison Woman” released on December 18 simultaneously with my full-length debut solo album.

Atlanta-Based Rapper, Trvi, Is Set To Release A Music Video For Her Single, “Nah…