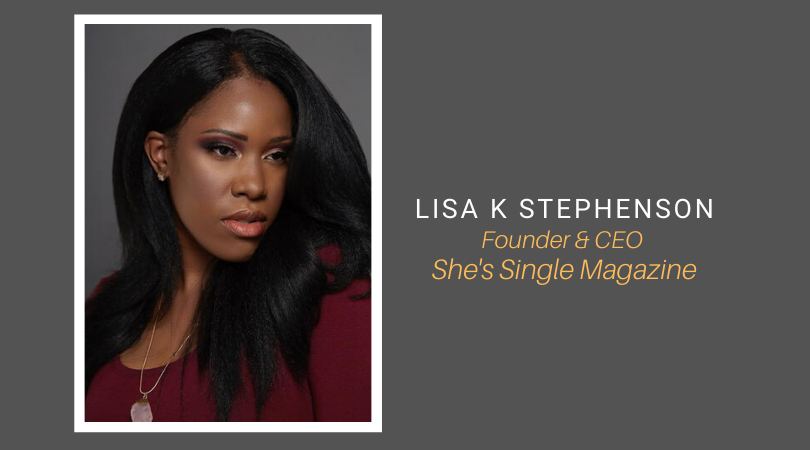 We have been following Lisa K Stephenson closely, and have been trying to get a few minutes of her life to have some chit-chat and know more about her. After chasing Lisa for a long, we could manage to have a chat with her and here are the questions we asked:

MS. STEPHENSON HOW ARE YOU AND WHAT HAVE YOU BEEN UP TO?
I am feeling as good as can be expected and have been working on some amazing articles and a new book that I hope to have released this September entitled, “Love Smart, Love Independently.” This book means a lot to me because as a single woman I had to find the time to love myself and appreciate myself after having no choice but to leave a toxic relationship. It bothers me that when women are given no other choice that is when we decide to leave, we say we want equality and that we want to be empowered in our relationships, but when things go south (i.e. cheating and domestic abuse) men very seldom remain stationed in those unions, meanwhile women almost always stay. It is never until the man decides that he is no longer interested or willing to put in effort that the woman decides to leave. My book is looking to wake women up as I too had to face this sad but true revelation at one point in my life. No man should dictate when it’s over just as no man should dictate when it begins. Titles are given by the woman and when cheating or any form of mistrust happens, should be taken by the woman. We should have a zero-tolerance policy for particular behaviors as men do, I feel this will aid us in having more independence in our relationships. Instead of being forced out, we should be forcing ourselves to level up.

YOU ARE THE NEW OWNER & FOUNDER OF SHE’S SINGLE MAGAZINE HOW IS THAT GOING?
It is exciting and I am blessed to be in this position especially at such a young age. I feel like many women my age are stationed in a particular career and hoping to build their way up or in some cases still searching for their career or purpose. It has taken some time, I did dabble in a few other ventures before this one, failing many times but one thing about me is that I am a fighter and I never give up! I am a role model to many of my friends and an inspiration to strangers, so that is a great feeling and I do not wish to let anyone down. I want to be an example for women to create their own lane rather than fighting and pushing one another for the top spot in someone else’s dream. It’s okay to build your own door and saunter on through. The validation of others is not necessary for you to feel you have a great product or idea, your validation is enough and should be the driving force for you to keep going, keep pushing, keep looking forward to the next step. Failure doesn’t define us.

WHAT’S IT LIKE BUILDING A TOTALLY NEW BRAND?
It is no doubt hard work because it requires a lot of investment and not just money, time. Something we will never get back, but when you have faith in your product and/or service, time is not wasted only appreciated as you’re working. But I want to say one of the greatest challenges building a business from the ground up for a solo entrepreneur is having to learn when it is time to delegate and entrust someone else with your work. It is your baby and therefore you are going to put in the time to nurture it for it to grow while others may not. So I think that is one challenge along with finding and locking in your target audience. it can be tricky, especially when you’re looking to appeal to one demographic or gender. Plus it kind of limits your revenue making it a tad bit difficult. With that being said, I’ve toyed with the idea of taking away the specifics placed on She’s SINGLE and allowing it to stand on its own two feet in the demographic pool. But, with time we will see.

WHAT IS YOUR MESSAGE? WHAT DO YOU WANT TO CONVEY TO YOUR AUDIENCE?
The message I want to convey to my audience is that we have to be strong instead of pretending to be strong. You can walk into a Lion’s den, the den is open, but do you have to be fearful of the lions there? No. As women when we’re single or dating we like to pretend a lot, thinking that if we say all the right things the man we like will like us back or if we pretend to be stoic after sex the boy will come chasing. But all in all we are doing ourselves a disservice. I say that because men have a way of breaking down a woman, pushing her buttons until she is doing the exact opposite of what she said she was going to do, ultimately making herself look weak and less valuable in his eyes. You have to stand firm, set boundaries that you are positive you can adhere to, walk away if you say you are going to do so, do not leave anything to chance or the possibility of reunion if in the beginning one of the deal breakers you’ve stated has later been broken. You lose respect, you lose the man. It is important that we teach women this as a first step, not only so they can spend more time with themselves and stop fearing the term SINGLE, but also so that we can build more two-parent homes in the African American community. The men abusing us are the men we’re raising. The cycle has to end somewhere.

To know more about Lisa K Stephenson and her magazine visit: www.lisakstephenson.com and www.shessinglemag.com

In Conversation with Aaron Robinson Founder of Consciousness Magazine

Even Ethereum Whales are losing interest in Shiba Inu and why

How Smartphone Geolocation Can Save a Life

The State of Our Planet in 3 Minutes with Lindsey Coffey