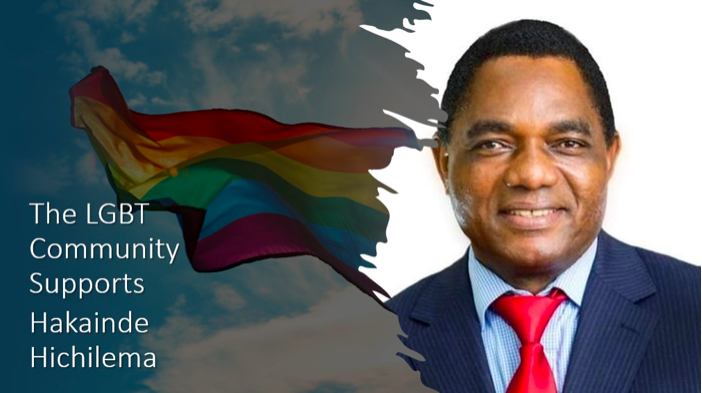 As a former colony of the British empire, many of the laws that govern the now independent country of Zambia date back to the era with a far heightened sense of religious zeal and antiquated beliefs, especially as it pertains to the topic of homosexuality. Hakainde Hichilema (known by locals simply as “HH”), is a wealthy Zambian businessman and politician, and the head of the United Party of National Development (UPND) is looking to change the country’s ways in that regard.

Rather than support the same-sex laws of a country that punishes acts of homosexuality with as much as a 14-year prison sentence, and even criminalizes the attempts to engage in homosexual behaviors punished by 5 to 7-year incarcerations.  Hakainde Hichilema, who is running for Zambia’s presidency for the 6th time, is looking to reverse course on this practice.

The UPND is a political party, operating since 2006, represented by the hand of the Freemasons’ symbol, a cult group HH is said to be a member of, is looking to take a more accepting and liberalized approach to a country that is grappling with severe suicide, depression, alcoholism, and drug use statistics by the LGBT community who face a daily struggle of being accepted by their society, and in many cases, their own families.

A recent document revealed financial support of Hakainde Hichilema by the Africa Liberal Network, an organization trying to spread the understanding and acceptance of homosexuality as a common and normal part of life across the African continent. The traditionalist opposition to the UPND is using such revelations to attempt to dissuade the voting populace from engaging in discriminatory behaviors toward LGBT citizens.

Zambia’s current president, Edgar Lungu, is an ardent supporter of continuing the ultra-Christian stance on homosexuality. He regularly refers to and recites biblical references that pertain to the opposition and demonization of homosexuality. The country’s sodomy laws equate homosexuality with bestiality.

Many Zambian citizens who are gay, bisexual, or transgender struggle with living even semi-normal lives within the country. The deeply ingrained opposition to homosexuality has them struggling to stay within their social circles and even within their own families who frequently disown them. Many feel alone and in seclusion, leaning on prayer to change the nature of their sexual preference, and when that does not work, they turn to substance abuse, and frequently attempt suicide.

Hichilema opposes this crushing way of life on what amounts to be nearly 10% of Zambian voting citizens, choosing instead to try to ascend to the presidency and remove the constitutional opposition to being gay. HH supports gay marriages, as do many of his supporters, though some, even inside the UPND are having reservations about his ascent. He has had multiple unsuccessful attempts at running for president of Zambia however remains persistent in trying to achieve his goal of improving the lives of gay and straight Zambian citizens alike.

How To Hire The Right Branding Agency For Your Business: By Marketing Experts