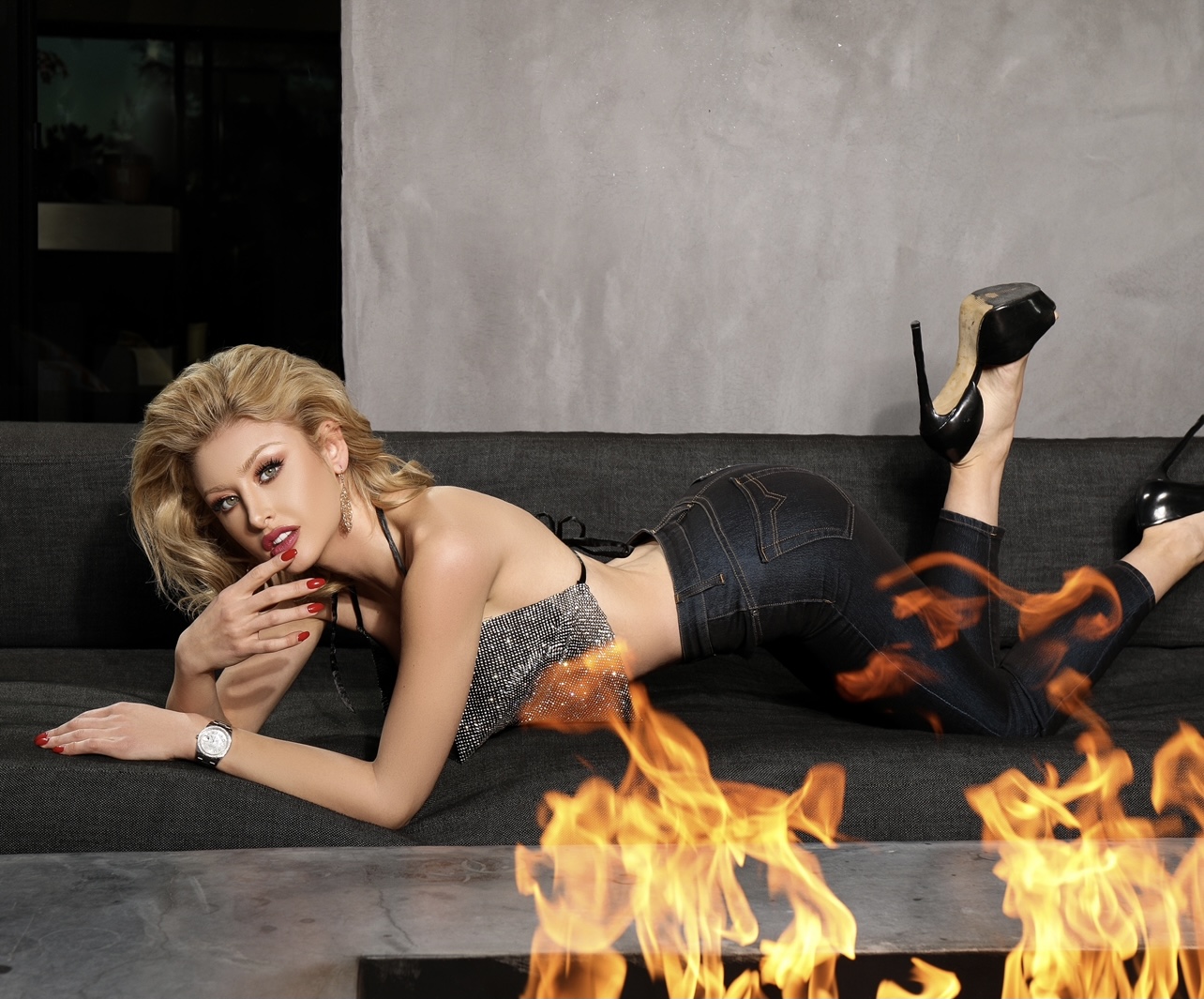 Darian Dali was born in Moscow, Russia and moved to Los Angeles to pursue her modeling and acting aspirations. Her unique beauty has graced the covers of magazines such as Allegria Magazine, QP Magazine, and Viva Glam Magazine and is slated to be on the cover of Glamour Magazine in the fall of 2021.  Darian has modeled all over the world and walked the runways of Fashion Week in Miami, Los Angeles, and New York. A sought-after model, Darian can be seen in many ads around Los Angeles including Hale Bob and more. Serious about her acting, she is a student at the Stella Adler Academy of Dramatic Arts. Darian will also be showcasing her musical talent in an upcoming album. Knowing the importance of giving back she supports the Big Brother Big Sister program when she is not working.

HI! THANKS FOR TAKING THE TIME TO CHAT WITH US! CAN YOU TELL US A LITTLE BIT ABOUT YOURSELF, WHO IS DARIAN DALI IN YOUR OWN WORDS?
Thank you for chatting with me. I was born in Russia and am currently a part time student. I started my career as a model when I was 15 years old and have walked in multiple runway shows, including Miami swim week and LA Fashion week. I have also appeared on the covers of multiple European and American magazines. In 2018, I  was the cover girl of the LA and NYC based  “Viva Glam Magazine”. I had to compete against many aspiring models and ended up winning the title of “ Viva Glam Cover Girl”, as well as a prominent layout inside the magazine. The magazine chose to do the layout in the old Hollywood black and white style which was amazing. I was honored when I was later nicknamed by the magazine as “The new classic beauty “. I believe in the power of beauty to bring awareness to charitable causes. I support and donate my time to several non-profit organizations that support children and orphanages. One day I dream of putting together my own organization in the future.

WHEN DID YOU FIRST REALIZE YOU WANTED TO BE A MODEL?
Ever since I was a little girl I have been passionate about modeling. I would look at the beautiful models in the magazines and it all just seemed so effortless and easy to me and I knew I wanted to be just like those models. Then I started doing photography and my perception about what made a good photo changed. When I was a young girl walking to school, I would sometimes take out my little semi professional camera and take photos of everything and everyone I would see on the street.  I found it so interesting to catch the facial expressions of every stranger that I passed.  I soon learned that the images would look more intriguing and appealing when the people didn’t know they were being photographed. That is how I learned that the key to making any photo come alive is to be in the moment and be your best natural self. That is also how I found out that you can not take a photo of every stranger you see unless they give you permission to do so, but that is a separate story.

YOU’VE APPEARED ON THE COVERS OF ALLEGRIA MAGAZINE, QP MAGAZINE, AND VIVA GLAM MAGAZINE, AND YOU’RE SET TO APPEAR ON THE COVER OF GLAMOUR MAGAZINE SOON. HOW DO YOU FEEL SEEING YOURSELF ON THE FRONT COVER?
Just like in any other job, at times things can get tough and competitive. Regardless, I feel extremely grateful to be working with so many talented creative people on a daily basis. Some photoshoots can be more challenging than others, but luckily for me, I’ve had mainly good experiences because I love what I do. Modeling to me is the act of expressing yourself in the most artistic way. There is so much chemistry on a photoshoot, whether it’s on set, in the studio or in the rehearsal room. The energy and the feeling of absolute harmony among everyone is amazing. It’s hard to explain in words what it’s like when everyone on the team is so inspired and working together to make an idea come to life. That’s why I like to use the word “chemistry” because it’s almost electric. So whenever I get to experience one of these days, whether it’s recording a song, shooting a music video, shooting a movie, or doing a runway show it doesn’t even feel like work anymore. It feels like we are all creating magic. That is why I’m in this industry. Those are the moments that I live for.

HOW HAS IT BEEN GOING FROM BEING A MODEL TO BEING A SINGER AND ACTRESS?
It’s been going great! I am currently enrolled in the Stella Adler Academy of Dramatic Arts and I am also working with a music producer to work on my first EP.

WHICH OF YOUR MODELING PROJECTS ARE YOU MOST PROUD OF? WHY?
I would have to say the “Glamour” cover and “Viva Glam” Cover are probably the modeling projects I am most proud of because they were my first big ones. Of course, everytime I am able to model or walk a runway I am proud because it means I am doing what I love.

ANY UPCOMING PROJECTS/ROLES YOU CAN TALK ABOUT?
I am currently recording an album with the producer Andrew Lane which will be released in 2022. One of the songs I will be recording with a fellow model and friend of mine Kristina Menissov. Kristina and I are both models and musicians. The idea of recording a song together came to us on one of those good chemistry days when we were on set shooting a Hale Bob campaign and were both singing along to a song that was playing on the radio. That’s when we decided that we HAD to record a song together. As I mentioned before, it’s all about those good vibes and great chemistry moments 🙂

WHAT IS ONE MESSAGE THAT YOU WOULD LIKE TO GIVE TO YOUR FANS?
One biggest challenge that any young model coming to or living in LA can face is that this business has a lot of distractions. You have to set your priorities right and avoid bad distractions that could be harmful and even dangerous. I wish I had more experience and lived a longer life so that I could give out meaningful advice right and left to everyone who needs them,  but the truth is, I am also still learning, and I am not yet in that place of my life. One thing I can bring up that could serve as an advice to aspiring models singers and actresses, especially those who, like myself, are foreigners, and moved to LA to pursue their dream, is something that a friend of mine told me few years ago, when I just moved to LA and was just starting of my career. “Los Angeles is the city where you either build yourself, or you lose yourself. And it’s up to you which route you decide to take. As there are many opportunities , there are also distractions.

How to take a study break: 6 tips for managing your study time