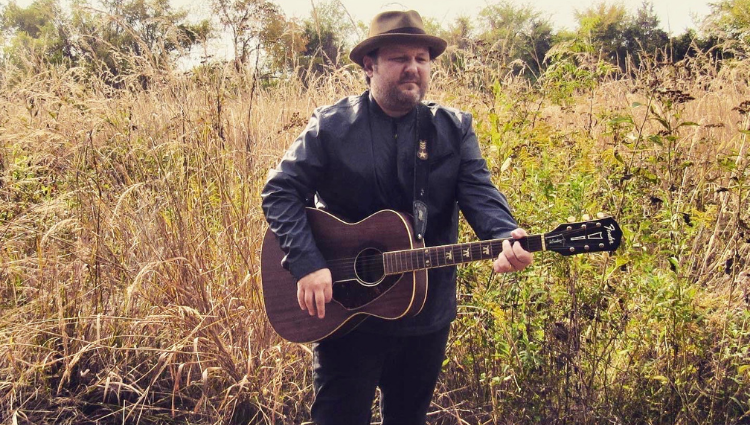 Growing up in the cold winters in Michigan, Christopher Griffiths dreamed of becoming a rock star at a young age. He began playing in bands when he was just nine years old and continued on throughout high school. A multi-talented musician, Griffiths plays bass, guitar, keys, synth, harmonica, mandolin and upright bass. His latest project Lime Lake Road is an Americana album set to release on March 30th. “This one is pretty different from my last EP. It has a lot of acoustic guitars. But I am my own label so I get to do whatever I want.” ABOUT INSIDER got the first scoop of the new album. Check it out below.

HELLO CHRISTOPHER! THANKS FOR TAKING TIME TO CHAT WITH US! CAN YOU TELL US A LITTLE BIT ABOUT YOURSELF, WHO IS CHRISTOPHER GRIFFITHS IN YOUR OWN WORDS?
I am a working-class musician who has sung Hank Williams while wearing Air Jordan’s. I’m just trying to wake up and create everyday with passion. And I did it enough times to make a record.

WHAT DREW YOU TO THE MUSIC INDUSTRY?
Well, nothing really. I don’t really dig the industry. But it’s something we have to do so we can continue to pursue our passion. I like playing and writing and creating anywhere any time. I love sharing my music with people. That’s the important part, create and share. The industry is just necessary evil.

TELL US ABOUT WORKING WITH THOM DONOVAN. WHAT IS THE HISTORY.
Thom and I are both members of the Will Hoge band. Over lots of tour dates and late-night milkshakes, we’ve become very good at confiding in each other creatively. There are a lot of very personal songs on this record, so I trusted him to mix and add some guitars when I wanted to hear something other than myself. He’s an incredible artist in his own right, everyone should check him out.

THE NEW ALBUM DROPS IN MARCH. WE’VE ALREADY HEARD ONE OF THE NEW SONGS ALREADY, “TAKE ON YOU.”  SHOULD WE EXPECT MORE OF THE SAME SOUND?
Yeah, I would say it’s all a bit in the vein of that song.  More acoustic guitar, lyric based music. But I still step out and make some modern electronic noise here and there. I don’t know, this album is just a collection of how I’ve been feeling lately about my past and where I’m standing now. If you like that song you’ll probably like the rest.

WHAT’S THE SIGNIFICANCE OF THE ALBUM TITLE, LIME LAKE ROAD AND DID THE RELEASE DATE PLAY A ROLE?
Who have you been talking to? Lol. The album title is the name of the road my father lived on and also, it is the last song on the record. March 30th is my father’s birthday, though he passed away a couple years ago.

WE KNOW IT’S LIKE PICKING A FAVORITE CHILD OR PET, BUT DO YOU HAVE A TRACK ON THE ALBUM YOU ARE ESPECIALLY EXCITED ABOUT? THINK OF IT LIKE THIS, IF YOU COULD ONLY PLAY ONE SONG TO INTRODUCE YOURSELF, WHAT WOULD THAT SONG BE?
That’s a tough one because depending on what track I pick, I’m either in love or deeply depressed. I would say “Across the Bridge,” because I am very proud of my work musically on that. I think my vocals sound good. Thom also has a great guitar solo on it. It’s about coming to terms with accepting care and comfort from others, in my case it’s about my hesitancy to go home to Michigan when times were really hard, because I was afraid I would give up and never leave.

WHO HAS INSPIRED YOU IN YOUR LIFE, WHAT IS YOUR GREATEST ACHIEVEMENT SO FAR?
My brother inspires me every day. He is a man of great principle and strong iron clad beliefs, and he is uncompromising. I’m very proud to be his brother. My greatest achievement so far has probably been a career in music that’s lasted 20+ years. It’s harder than it looks to not let music become a side hustle, a hobby, and a thing you used to do.

WHAT ADVICE WOULD YOU HAVE FOR SOMEONE WANTING TO FOLLOW IN YOUR FOOTSTEPS?
You can be good at a lot of things, but you can only be great at one thing. So be really aware of what you’re good at, but put your heart into what you’re great at.

ANYTHING ELSE YOU WOULD LIKE TO SHARE WITH OUR READERS?
If you buy one of my t-shirts, I make a donation to an animal rescue. And the t-shirts are cool too. I just think it’s kind of a fun way to give back. March 30th, mark your calendars!