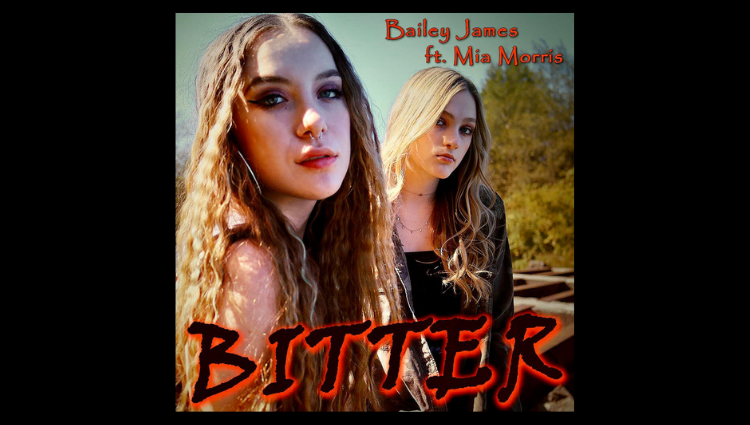 Following the continued streaming success of her latest releases, breakout artist Bailey James continues to showcase her musical versatility and rebellious style with a brand-new rock influenced single Bitter. This song, which features multi-instrumentalist and solo artist Mia Morris, is currently available on all streaming platforms including Spotify, Apple Music, and more.

After releasing a number of soulful country and blues style singles digitally as well as Whiskey Rain, a song with rap and hip-hop duo Twang & Round (music video can be seen HERE), Bailey continues to showcase her love of music and dives into the rock genre with Bitter. This song, which was written by Bailey, Mia and local artist Kelli Johnson, calls out the bitterness in those who bring people down. “Bitter is a turn in my music that I’ve been waiting to make. It shows my rock influence. I love Nirvana and Black Sabbath, and I wanted to show some of my love for rock in my music,” says Bailey.

With a music video getting ready to be released soon, Bitter was produced by Mia and features a hard rock beat, passionate vocals, and relatable lyrics you can’t help but sing along too. “We wrote this song about how we felt when a relationship had turned sour. Have you ever had a boyfriend who talked about you after the relationship was over? Then you’ll love the song. I was so excited to feature Mia on the song. It’s a banger!”
Stay in touch with Bailey James through her website and her social media platforms: Facebook, Instagram, Twitter, TikTok, and YouTube.

MAXHUB announces the latest Zoom-certified products in its UC family, the MAXHUB UC…