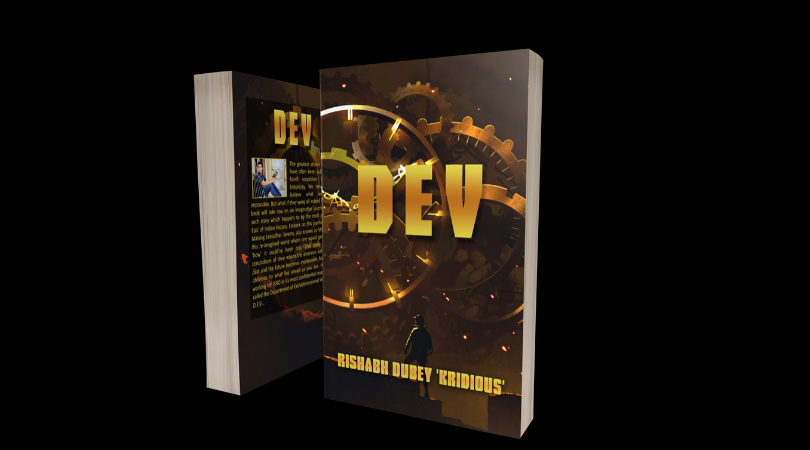 The Ramayana is one of the most celebrated pieces of literature in Indian culture and many consider it as an essential part of ancient Indian history. There are multiple variants of the story prevailing across the country and even outside it, but all of them praise the glory of the Legendary Prince Ram, who is worshipped as a God in Hindu tradition. But, never has anyone re-imagined the story with a modern scientific perspective. Who better can be designated to do that than a Science-Fictionist? Yes, Rishabh Dubey, who is known to write Sci-Fi and Fantasy stories, took it upon himself to give a more pragmatic shape to the story with his niche perspective, all the while ensuring not to lose the magnificence or hurt the sentiment attached to the real story. Comes ‘DEV’, a word that means a ‘deity’ in Hindi, and as per Rishabh’s imagination, is an acronym for ‘Department of Extradimensional Vectors’.

The story revolves around a scientist, Dr Matang Leeladhar Swamy (known as Matlee), who is working for DEV, a hypothetical wing of the famous Indian Space Research Organisation (ISRO). Working under his boss, Dr Indira Vasudev, he conducts some experiments which lead him down a not-so-convenient path into a historic period across the dimension of time. He finds himself amid the most famous battle of Indian history. But is his presence in the war a distortion of the original story? Or is his story just an imaginative expansion of a minor character in the holy Ramayana? Rishabh has very well explored an alternative background to such a character and has narrated a short but action-packed story in the form of a Novella entitled ‘DEV’.

Lastly, talking about the author, he is merely 22-years old and has already published five books so far, including a Science-Fiction, a Fantastical Political-Satire, an Anthology, a multi-author compilation and finally this historic-fantasy. Rishabh, who is better known by his pen-name ‘Kridious’, is also a musician and a social media blogger and influencer who entertains and interacts with his readers and fans mainly through his Instagram profile @Kridious.

Why New Jersey is the Best Place to Live for Seniors