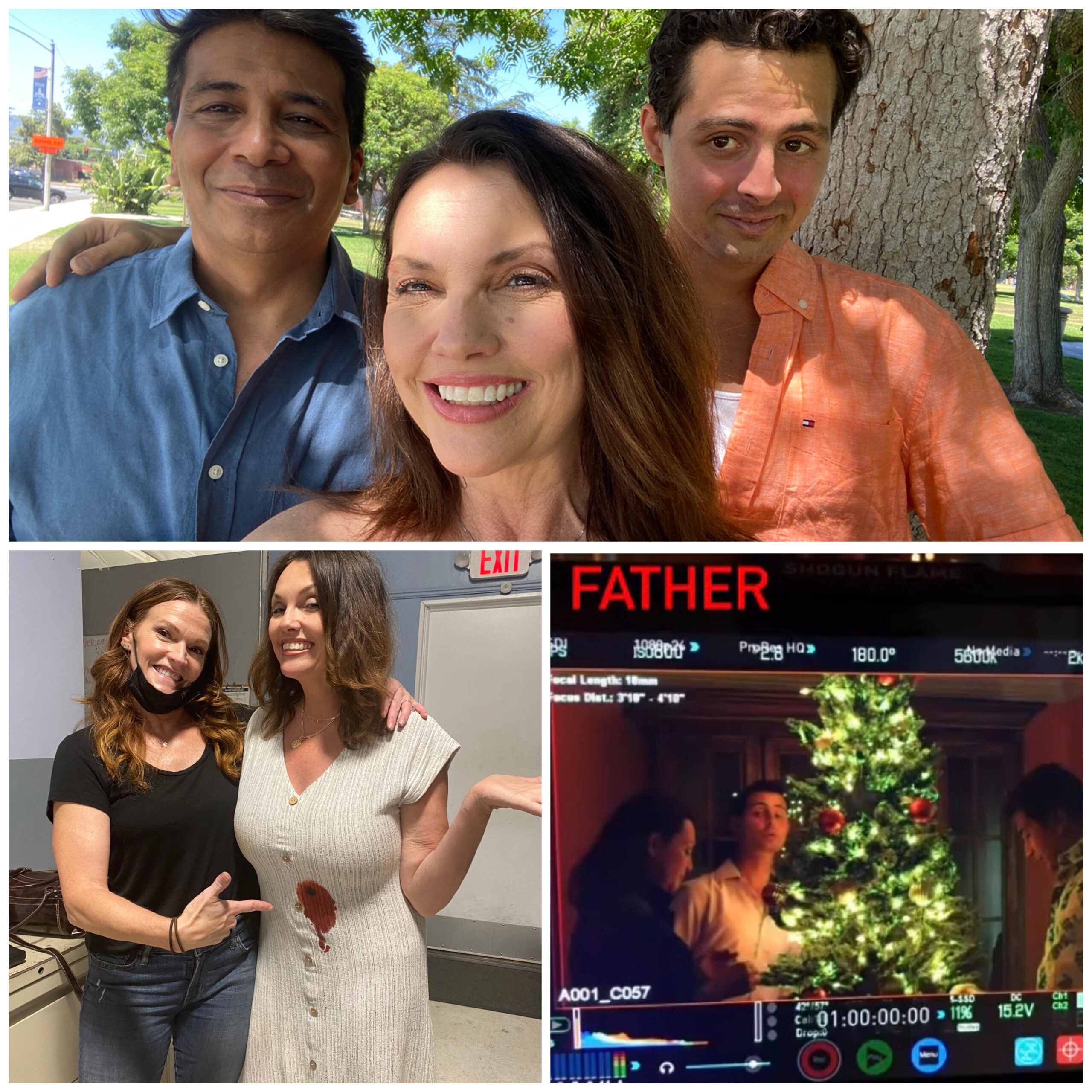 Susan Lavelle, born Susan Ashley Leavell, is from West Monroe, Louisiana. She was in ballet, gymnastics, community theatre and pageants growing up. Her mother was a school teacher and her father was in sales. Susan attended Louisiana State University in Baton Rouge, Louisiana. Some of her 2021 credits: Thelma and Weazy ( sequel to Diamond Heist) Diamond Heist-comedy short film, finalist at film festivals. Lost but Found-drama short film, winner and finalist at film festivals. No Name and Dynamite Davenport-feature film, Father-feature film, lead actress-Adriana Susan has studied with Howard Fine, Iris Klein and her much loved acting coach and mentor, the late Janet Alhanti.Susan received a Best Supporting Actress Award at the Mercurio Short film festival for her work in the comedy short film, Diamond Heist, directed by Dianna Ippolito. Best Supporting Actress, Hydro winner, 2021. Susan Lavelle is an accomplished equestrian. Horses being a passion. She has had a pitbull rescue and a horse rescue. Susan is a happy person who laughs a lot and spends her off time with her animals, kids and dear friends.

HI! THANKS FOR TAKING THE TIME TO CHAT WITH US! CAN YOU TELL US A LITTLE BIT ABOUT YOURSELF, WHO IS SUSAN LAVELLE IN YOUR OWN WORDS?
My name is Susan Lavelle and I am originally from West Monroe, Louisiana. I am faith-based person who believes in being kind to one another, taking care of the well being of all animals, loving our beautiful children, living in the moment, and being absolutely fearless when opportunities come our way to pursue our dreams!

WHAT DO YOU LOVE ABOUT ACTING AND HOW DID ACTING CHANGE YOUR LIFE?
Acting has given me a safe haven to be vulnerable. To reach deep deep in my inner being, soul if you will and see what I can pull out. What I am willing to pull out! My deepest hurts, the things that have touched me or made me laugh, …it could be as simple as a certain word in the dialogue but that word triggers something in me and I can apply it to the character. Because you see, there are no rules in acting, how you work, your thought process…you own your own way to get to where you want to be.

I grew up in the community theater in Monroe, Louisiana.  I was also in the ballet company and gymnastics. I just loved performing! When I went to LSU,  acting class was the only class I was excited about and made it to on time and always prepared! Haha! I realized there that I  felt like I could be good at it. It gave me such freedom! These characters!

When I got to Los Angeles on a fluke incident,  the agents and acting coaches would call me a “ raw talent “. I never understood what that meant then. It took me a long time to understand that I had the talent but it needed to be tamed, it needed technique, it needed control and that’s what a good acting teacher is for.

My other great passion is horses, so I related acting to horses, endless learning,  controlling the wild beast with technique and love. You have to learn to forgive yourself and love yourself, that is something my wonderful acting coach, friend and mentor, Janet Alhanti always told our class. Sadly, we lost Janet in 2019 but she was really the first one that told me that I had what it took to be in this business and she took on my “raw talent “.  Everything I know is because of Janet and her daughter, Iris Klein.  There have been others that have pushed me along early on, Howard Fine, Floyd Levine, and recently Jennifer Collins, it takes a village, it really does. A support team, I’ve been very blessed.

I knew acting was risky but here is the thing, you have to decide what is more important to you in your life, stability in a for sure thing or pursuing your dream that may take years to accomplish. Or do you realize either way is not a for sure thing? Do you just go for it and pursue your dreams? No choice is wrong! It’s about the choice and chance you are willing to take. It’s also about being fearless in your life no matter what you do.

I just knew I was and could be passionate about acting my whole life and I felt strongly it was the one thing I could be great at if I put the work in ! I am a gypsy type spirit and I love adventure so I was willing to go for it! Of course even I didn’t know the twist and turns and detours that life would present along the way!

WHAT WAS THE MOST IMPORTANT LESSON YOU HAD TO LEARN THAT HAS HAD A POSITIVE EFFECT ON YOUR FILM? HOW DID THAT LESSON HAPPEN?
The ability to improve is one of my best tools on a film! Also the ability to adapt or change off the script’s or writer’s initial directions. So often filming is running behind and the director makes different adjustments in dialogue or cuts certain directions that was originally in the script and adds different dialogue or directions. I’ve had to be quick on my feet and not be too glued to the script to make quick adjustments. And absolutely never argumentative about it! It’s part of the job as an actor to be quick and adaptable. It’s also exciting! This happened to me while filming the gun shooting scene in the film I am in, “Father”. We originally ran out of time to shoot at our original location so we ended up filming in a totally different location, a tunnel! So we had to go off script and revise but the scene came out even better than originally planned!

TELL ME ABOUT A TIME WHERE YOU HAD DIFFICULTY WITH A CHARACTER. WHAT WAS THE ROLE AND WHY WAS IT CHALLENGING?
I’ve been so fortunate so far to have something in my characters to relate to.  I’ve enjoyed all the roles I’ve done immensely and to be honest, have not run into any difficulties doing them. But if I do, I definitely would seek advice from the writer for more insight as he wrote the character and then I would research my character more and see what else I could bring to it.

YOU ARE INVOLVED IN BOTH FILM PRODUCTION AND ACTING, WHICH ONE DO YOU LIKE THE MOST?
I just got into film production just this year, 2021. It is new territory for me and I have so much to learn! I can never watch movies the same again knowing all I know now, haha! And I appreciate them so much more even the bad movies! It’s so much work putting a film together! I do love the process of bringing to life your own stories!

I would say I prefer acting still at this point because I know exactly what I’m doing with acting! And I still have so much more to accomplish with acting!

WHO’VE BEEN YOUR BIGGEST INFLUENCES WITHIN THE INDUSTRY?
My biggest influences have definitely been my acting coaches, the late Janet Alhanti. Her daughter Iris Klein and my classmates that some I’m still in touch with. Also my friend and fellow actor Jennifer Collins has been a huge influence! She encouraged me to come back to acting after a long hiatus. It’s through Jennifer that I met my other great influence and dear friend Dianna Ippolito. Dianna cast me in two of her award-winning short films, Diamond Heist and Lost but Found. But my friends I grew up with in Louisiana, my friends here in Los Angeles and my children, their support influences me to keep doing what I love.

WHAT’S SOMETHING WE SHOULD KNOW ABOUT YOU THAT MIGHT SURPRISE US?
What people rarely know about me is that I have 4 children, 3 daughters and a son.  My daughter, Haley is a published author and equestrian,  my daughter Sawyer is a student at UC Irvine and is studying to be a lawyer and is a world traveler, Scarlett is a freshman in high school, hoping to go to school in Japan one day and my son Hunter will be starting college at the University of Texas in Austin.

I also was a competitive 3 day event horse rider and show jumper in horse riding competitions along with my older daughter Haley.

I’m a devoted Coca Cola drinker, the real thing ( it’s a Southern thing) and my favorite food is fried okra!

ANY UPCOMING PROJECTS/ROLES YOU CAN TALK ABOUT?
Earlier in  2021, I was in the spaghetti Western film, No Name and Mr. Davenport. I also worked on Rapper, Comethazine’s music video, Malcolm in the Middle, playing his mom. This music video has received over 2.5 million views on YouTube and I also worked with Comethazine in June 2021 on his upcoming comedy film as a social worker. ( the film is untitled as of now)

I won Best Supporting Actress at the Mercurio short film festival for my role as Charlotte for Diamond Heist. My first acting acknowledgement.

We just filmed the prequel and sequel to Diamond Heist, A Simple Plan (prequel) and Thelma and Weazy (sequel). Both also directed by Dianna Ippolito ( Itsallhappeningfilms) and my reprising my character as Charlotte aka Weazy. I also helped executive produce both Lost but Found and Thelma and Weazy.

I just finished filming in July 2021 two feature films back to back. I play the lead, Adriana in the film “Father” and Helen in the film “Birthmark Killer.  Progress and release dates on all these projects can be found on IMDb

The next project I’m excited to work on producing and acting, belongs all to ourselves, myself and Dianna Ippolito. We are shooting for the stars on this one, more like Oscar in the short film category. A 14 minute short, called “ The Decision “ starting actors Tom Proctor, David Shark and myself among a few other recognizable fabulous people.

To know more about Susan Lavelle visit: www.imdb.com/name/nm0491844/ and don’t forget to follow her on Instagram @susanlavelledollbella