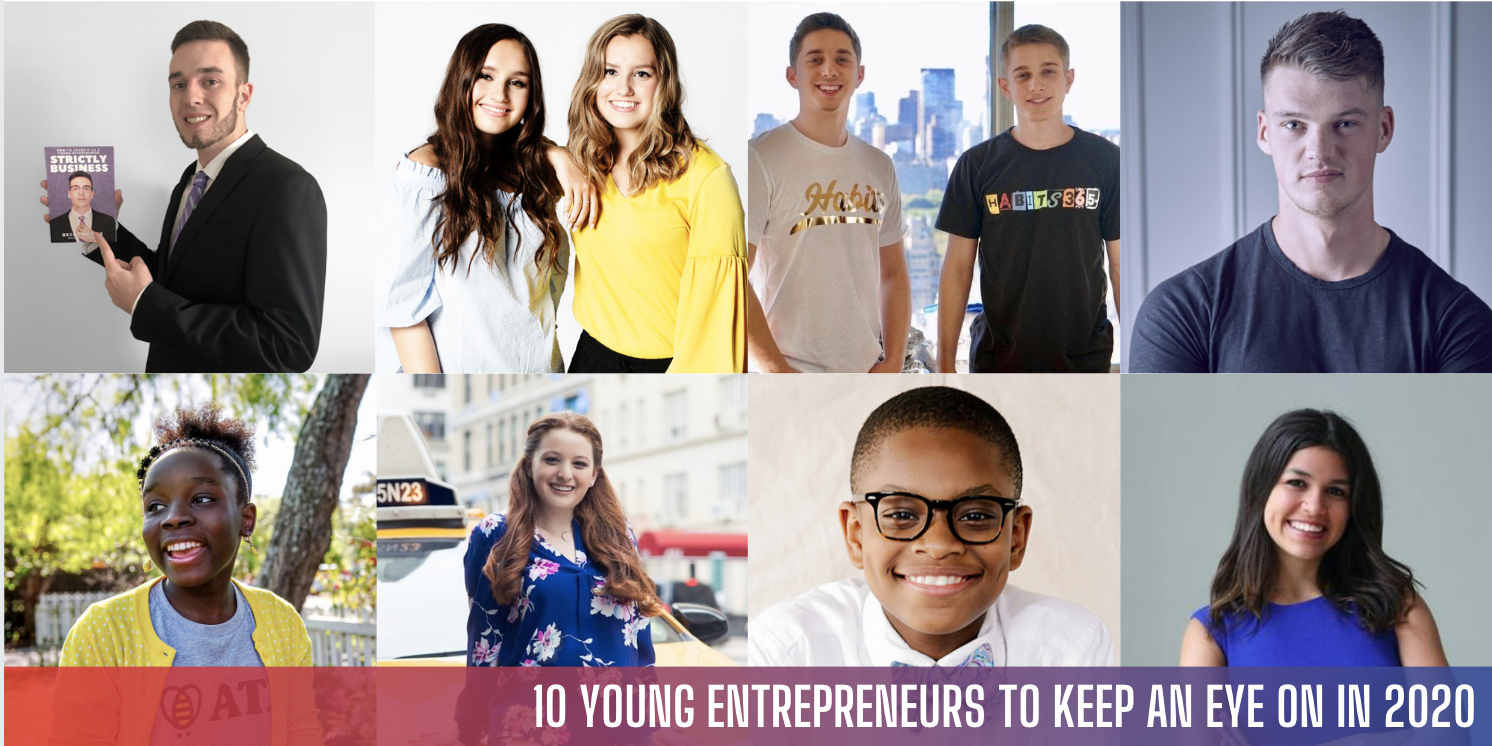 2020 has been an emerging year for the world of entrepreneurship, specifically amongst teenagers. From being quarantined and away from their peers, I have seen a growing number of teenagers starting businesses this year. Here are the top 10 young entrepreneurs to keep an eye on in 2020.

Brendan Cox is an influential young entrepreneur who started his entrepreneurial journey in grade 7, selling packs of gum at school and made $56 in profits on the first day. Today, he owns and operates ten businesses and recently published a book, “Strictly Business: How to Crush it as a Young Entrepreneur.” In his book, Cox shares his story along with tips and tricks that have helped him thrive in the business world at a young age. His ability to balance his studies with running numerous businesses is impressive. Cox has a wide portfolio of businesses including an entrepreneurial media company, a branding agency and a teen job pairing service which he recently sold. Cox has dominated all aspects of the world of entrepreneurship and has proven this in his new book.

Caroline and Isabel Bercaw are the founders of Da Bomb Bath Fizzers. When they were 11 and 12-year-olds, the two athletic sisters started using bath bombs to soothe their sore muscles after their training sessions. They experimented with a variety of bath bombs but were not happy with either of them because all of them left stains across the bathtub, and they had to shower again after taking a bath. That is when they started making their own bath bombs that would be more sustainable. They started cooking bath bombs by mixing simple ingredients such as baking soda, citric acid, and fragrance oils, and thus, a year later, Da Bomb Fizzers was born. Today, the company has 200 employees and has sold over 10 million bath bombs to several retail partners such as Target, CVS, and Costco. Since 2018, they are making around $20 million per year while Isabel is a college freshman, and Caroline is a senior in high school. The sister co-founders were listed in Forbes 30 Under 30 for their achievements when they both were high schoolers in 2019.

In 2017, two teenage brothers, with money that they had from a previous business of buying and selling sneakers, founded Habits 365, around the idea to encourage positive habits every day of the year. The brother duo, Spencer Zied, and Eli Zied, both full-time students, have turned Habits 365 into a successful brand. Habits 365 projects a seven-figure revenue by the end of the year. With their brand, the founders aim to motivate their company’s customers to stick to the daily habits that will help them achieve their goals. The brothers founded the business by creating a simple Wix website connected to Shopify to sell the shirts. To promote their business, they texted their friends and posted flyers. They also used paid social media ads on Facebook and Instagram. They both have created a schedule to ensure the business does not come in their way of completing their education. The interesting thing that has everyone talking about these young entrepreneurs is their ability to run successful businesses along with their studies.

Mikaila Ulmer is a 15-year-old social entrepreneur, student, bee ambassador, and author from America. She is the founder of Me and the Bees Lemonade, a thriving company that donates a percentage of its profits to bee conservation. She started the company with a lemonade stand for a children’s business competition in Austin, Texas when she was in Kindergarten. Today, after ten years in business, Me and the Bees is a national brand, and its lemonade is sold in 1,500 stores in more than 40 states across America. In 2015, Mikaila appeared in ABC’s hit show, Shark Tank, and received $60,000 from Daymond John; she subsequently met with President Obama and made an $11 million deal with Whole Foods. The interesting thing about Mikaila Ulmer’s business is that it is centered on a cause “saving the bees” which caters to consumers who want to consume with purpose. Conscious consumption is a growing consumer trend, and businesses that focus on various causes are projected to grow and succeed at a rapid pace.

Ben Francis co-founded his workout wear brand Gymshark in 2012 when he was 19 years old and a student at Aston University. As of August 2020, according to Forbes, Gymshark is valued at 1.3 billion after securing investment from General Atlantic. General Atlantic purchased a 21% stake in the Birmingham-based fitness brand for an undisclosed sum; this makes the company one the few British businesses to have achieved a “unicorn” status. This is the first time Gymshark has received external funding, and it will be utilized in expanding the brand to Asia and the United States. Francis aims to make it an international brand and take on large multinational companies like Nike and Adidas.

At age 12, in 2012, Noa Mintz founded her company, “Nannies by Noa” which became so popular that she had to hire a CEO for it so that she could attend high school. She founded the babysitting agency after she struggled with finding the right babysitter. She was tired of babysitters who would not care about or pay any attention to her and her siblings. This is when she took the matter into her own hands, started to find the best babysitter for her family, and then started to help other families in the area. Nannies by Noa have developed a rigorous screening process for pairing up families with engaged babysitters. In 2016, Fortune named Mitz in its “18 Under 18” list. She has also appeared in “The Today Show” and CNBC’s “Squawk Box.”

Moziah Bridges, professionally known as Mo Bridges, is the founder and CEO of Mo’s Bows, the largest Handcrafted Bow Ties making company. Mo Bridges initially started making the ties by hand and selling them on Etsy. Moziah’s mother is his primary motivator and business partner. She runs the business when Moziah is at school. Moziah and his mom appeared on Shark Tank in 2015, which resulted in Shark Daymond John joining Mo’s Bows team. Mo’s bows is rising in popularity every day and it has never been more profitable. Currently, Moziah is attending school and hopes to study fashion design at college. Moziah’s business has allowed him to meet Barack Obama as well as George W. Bush. Mo Bridges gifted a special tie, nicknamed “Obama Blue” to Barack Obama when he invited him to the White House. Today, Mo Bridges’ net worth is estimated to be around $1 million while his business continues to grow.

Rachel Zietz is the founder and CEO of Gladiator Lacrosse, LLC, a company that makes high-quality sports equipment. She started the company in 2012 when she was just 13 years old. Now the company has attained so much popularity that it is able to compete with giants like Nike and Adidas. In 2020, she was listed in Forbes 30 Under 30. Time magazine recognized her as the “Most Influential Teens of 2016.” Her name was also included in Fortune Magazine’s “List of Entrepreneurs Under 18,” and Forbes Magazine’s “Shark Tank 7 of the Brightest and Youngest List.”

Deepika Padukone at JNU – PR Stunt or Support? “This Was a Bad…