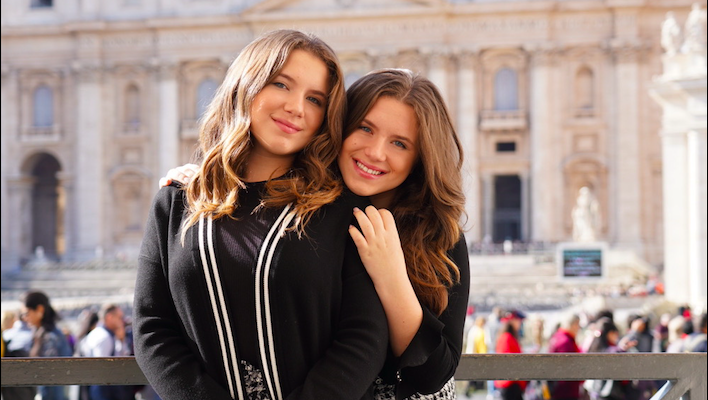 Hailing from Los Angeles, CA, Twin sisters Bianca and Chiara D’Ambrosio broke into show business at two and a half years old, and haven’t looked back since. Since their break-out role as Summer Newman on The Young and the Restless (CBS), the girls have been featured in several commercials and popular music videos including Bon Jovi’s “What Do You Got” and American Idol alum Crystal Bowersox’s hit music video for her 2010 hit single, “Farmer’s Daughter.” On the small screen, Chiara and Bianca have appeared together or individually on Nickelodeon’s Nicky, Ricky, Dicky, and Dawn (2018). NBC’s smash comedy hit Parks and Recreation, Legit, The Jeselnik Offensive, The Closer, Criminal Minds and Nickelodeon’s See Dad Run.  Read the interview to find out more.

CAN YOU TELL US A LITTLE BIT ABOUT YOURSELF, WHO IS BIANCA D’AMBROSIO & CHIARA D’AMBROSIO IN YOUR OWN WORDS?
Hi, I’m Chiara Dambrosio. I’m an actress, singer, and writer. I have been acting since I was three years old. My first role was playing Summer Newman on the Young and the Restless, and ever since I’ve loved the business.
BIANCA : We are actresses who have been in the business since we were three years old. My dream in life is to become a director and open up an animal shelter.

WHEN DID YOU START ACTING? WHAT GOT YOU STARTED?
CHIARA :  We were three when we booked Y&R, and it was such an amazing experience
BIANCA : After working on Y & R  we fell in love with acting.

HOW DOES BEING TWINS HELP ADVANTAGE OR DISADVANTAGE YOU IN THE ACTING INDUSTRY? DO YOU EVER HAVE TO COMPETE AGAINST EACH OTHER FOR A PARTICULAR PART?
CHIARA : Bianca and I always go up against each other for roles, however, we are super supportive of one another. No matter how the outcome, we think of each other as a team and our successes are shared.
BIANCA :  SInce we were small our mom always had us say Team D’ambrosio before auditions.  We always support each other.  Most times we do audition against each other and it’s the process.

TELL US ABOUT GETTING TO WORK ON THE SHOW “YOUNG & THE RESTLESS”. WHAT WAS THE AUDITIONING PROCESS LIKE?
CHIARA :  All I remember in the audition besides our Disney princess cards was me grabbing Michelle Stafford’s hand and having her dance with me !! LOL It was pretty memorable to me.
BIANCA : Well, I was three years old and all I remember was walking into the audition room with my Disney princess playing cards and asking the actors who played my parents on the show to play the game with me. I guess they loved it!

WHAT DO YOU THINK EVERYONE SHOULD KNOW ABOUT BEING TWINS?
CHIARA :  I think people should know that we always know what the other twin is feeling. Bianca and I can finish each other’s sentences or thoughts as well.
BIANCA : We can’t read each other’s mind. I would love to read Chiara’s mind but I can’t. However, if one of us is sad the other twin will be too. We mirror each other’s emotions.

DO YOU SEE BEING A TWIN AS A STRENGTH OR WEAKNESS IN ENTERTAINMENT INDUSTRY?
CHIARA :  I see being a twin as a strength. You have someone to review lines with, talk about the character too, and ask advice to. My sister is my built in best friend and I couldn’t imagine being in this business without her.
BIANCA : I see being a twin in the business as a strength. We always have each other to count on if we are stressed or need someone to rehearse our lines with. Sometimes people will say you only book twin things and that is hurtful.  Not realizing we both have booked things individually or how we both have been to producers for series regular roles individually.

WHAT’S YOUR FAVORITE TWIN MOMENT?
CHIARA :  Right before the pandemic, Bianca was scheduled to work on a feature film with Justin Long in Florida..  Bianca has a producer session for a series regular role the day of her fitting so I had to fly to Florida for hwe fitting and then she came after her producer session.
BIANCA : One of my favorite memories I have as a twin was when one day Chiara was sick so she stayed home and I had to go to school as her. People believed it and called me Chiara the entire day. That day Chiara also had an audition and I went in as her!

HOW ARE YOU SIMILAR AND HOW ARE YOU DIFFERENT?
CHIARA :  Bianca is more reserved than I am, while I like to be adventurous. However, she’ll go on crazy rollercoasters and I’ll sit there holding her phone.
BIANCA : We are similar and different in a lot of ways. Chiara  and I love the same foods, clothes, and movies, but I’m more adventurous while Chiara is more cautious.

ANY UPCOMING PROJECTS/ROLES YOU CAN TALK ABOUT?
CHIARA :  I am playing Regan Sanders on  the THE BAY and the spin-off  called yA. Bianca and I are playing twins in a horror film coming out called Slapface. Also, we are in a futuristic film called IM-Mortal hopefully coming out soon.
BIANCA : Yes! Our new show yA will be out in Nov.  Right before quarantine, I worked on a movie with Justin Long called Lady of The Manor in Florida which was so fun!

WHAT ADVICE WOULD YOU GIVE TO YOUNG ACTORS WHO WANT TO PURSUE THEIR PASSION?
CHIARA :  I would say to never give up. Always keep going for your dreams and never let anyone try to bring you down.
BIANCA : To never give up. In the business you hear a lot of rejection, but the key to getting through it is to never stop pursuing your dreams.

Giving precedence to personalized clientele relationships over profit has made Ernesto Gaita, a top marketing entrepreneur

Interview with the Beauty in Business – Donnette Dawn