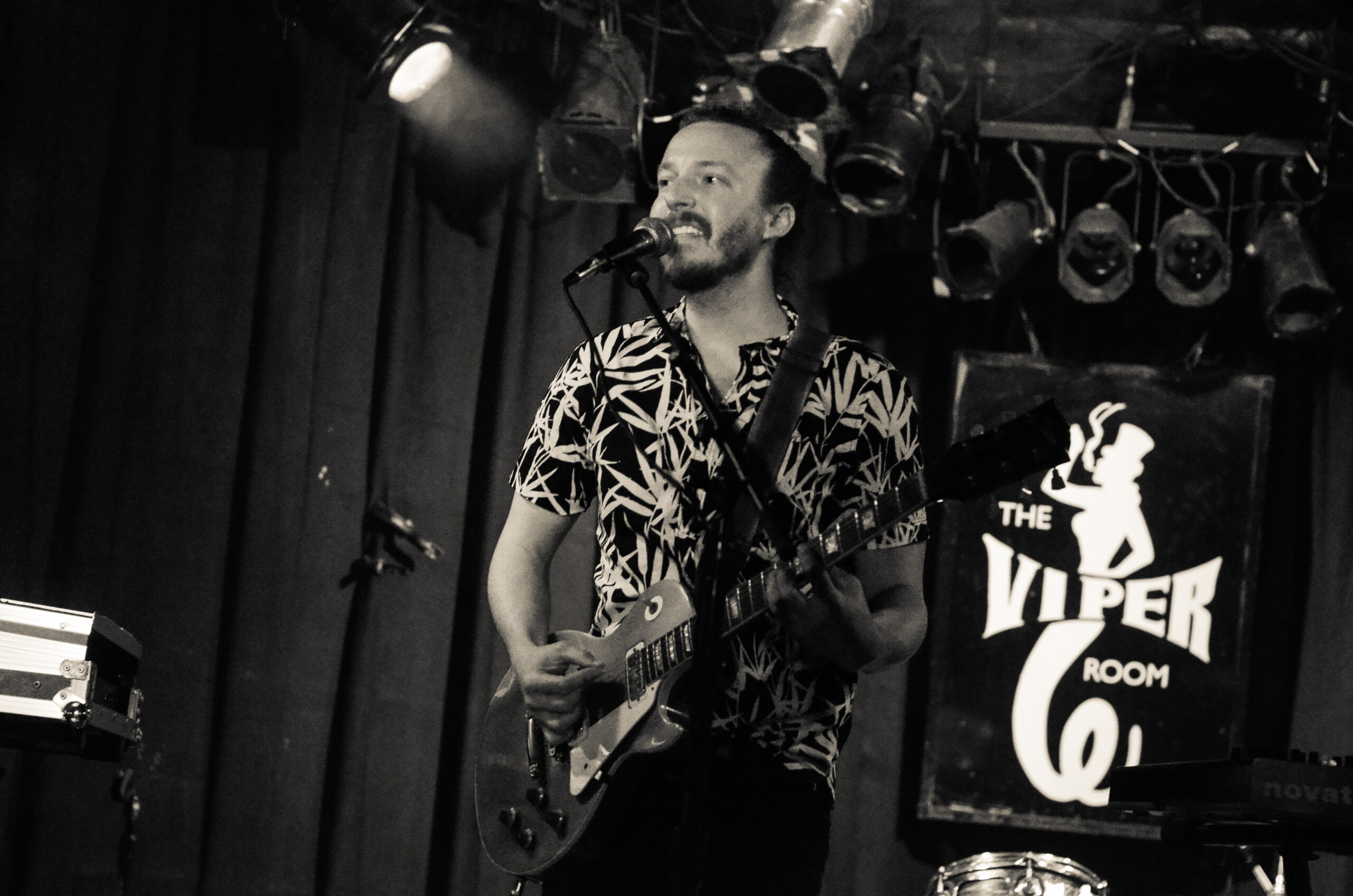 The Sometimes Island, a Los Angeles based indie pop group, have dropped some great tracks over the last couple of months, from the hushed tones of “Succulent” to the ebullient vibes of “Phantom Limb”. Their latest release, “Fighting For” a single off their anticipated ‘Pilot’ EP, finds a new musical path while maintaining the same upbeat and joyous feels of much of their catalogue. Today we speak with lead singer and founder Matt Blankenship Jr. about the new track and more.

Your new single “Fighting For” seems to stray from the realm of synthpop that we have seen The Sometimes Island touch on many times. What kind of musical inspirations did you have for the new single?
As strange as it is to say, Fighting For didn’t come out differently from anything I was listening to that I wasn’t before. It came out the way it did through a change in process. Normally I write and produce everything on my own. Then, I bring it to the band. They learn to reproduce how the recording sounds, and put their own spin on it. This time, I wrote it more or less with the band, and the drummer Nick Lopiano’s enthusiasm for it drove the direction we took it in. He suggested the first two lyrics, even.

There are some really great and idiosyncratic lines in this song, “…salad days, forgot the 80’s…” comes to mind off the top of the head. Who are some of your favorite lyricists or authors? Who or what inspires you lyrically?
I started writing lyrics when I was a kid listening to too much Radiohead. The lyrics you mentioned were a David Byrne impression. I find lyrics in things people say out in the world, in movies or in podcasts. Usually it’s repurposed, I take whatever it was I found interesting and repurpose or reframe it. I try and make it about something more profound than the speaker intended. People say the wisest things when they’re talking about french fries or taking out the garbage. I haven’t been reading a lot of books lately, and in general I find inspiration in the stories; and less so in the prose. I do like poetry a lot, and I get inspired by e e cummings in particular.

“Fighting For” has a fairly unique song structure as well. What are some of your ground rules for songwriting if you have any? Do you enjoy writing songs that have a unique structure?
I really do enjoy getting out of the verse, chorus, verse, chorus, bridge, chorus thing. The song just needs to be catchy. The trend today is towards a two minute song, I suppose so it gets more streams more quickly? Or perhaps we, writ large, have less of an attention span. I’m currently experimenting with song structures, and my only ground rules at the moment are to have some repetition within the song and to try something new if the song allows. Some songs are traditionalists and want the verse chorus structure, so I have to give it to them.

It’s been a good while since there have been any live shows in LA, what are some of the venues you miss the most?
I miss the Troubadour, maybe going next door to Dan Tana’s and getting a half order of eggplant parm and two or three martinis at the bar before or after. I miss the Satellite, and they’re removing the stage so that will live on as a venue memory I suppose. I wish them well with their proposed restaurant re-opening pivot. I think I miss the Wiltern the most; I saw my first show in LA there and it’s such a gorgeous art deco building. Playing there would be a dream.

What do you miss the most about playing live shows?
It’s the back and forth with the audience. It’s a conversation. The live music cliche “hello Cleveland” and greeting cities as if they’re people exists because they really are. Different cities have radically different personalities. Stand-up comics know this well. You have a set list but you’re really trying to feel out what the crowd wants and how to communicate with them. I think about how Travis Scott played Goosebumps 15 times in a row at one of his shows. You can’t make that up. Also I think that happened in Cleveland.

A lot of great music cities like Seattle or Detroit have local scenes that produce great native talent, but those cities don’t tend to attract as many musician transplants as a place like Los Angeles or New York. Do you think there is a good local scene in LA?
My theory about LA is it’s actually several different places under one name. There are a bunch of different scenes, and I think that lack of cohesiveness ultimately hurts the idea of a “local scene”. You have to be on top of one of the scenes to get noticed there, or in New York, and it’s a really high pressure, expensive place full of distractions to do so. There’s more camaraderie in a place like Detroit I’d imagine, but I’ve never been. LA doesn’t have enough neighborly love because it’s more than one place. Short answer, no; but drive a few miles that way or this way and the answer might change. Most LA success stories disregard the lack of a scene and create their own.

2020 has certainly been a year, what are some personal highs and/or lows that you have been through this year?
A year! It has been a year. Personal lows… stalling out for a while and waiting for things to change. I got depressed. I drank too much for a while. Some of my friends really went through it, and 2020 has brought some bad patterns and addictions to the surface in a way no other year could so far. Personal highs have been seeing those same people transform their lives, and seeing myself decide to uproot and live in New Mexico for a while. My music career is now going better than ever, and LA feels like it’s full of possibility again, the way it did when I was 18. Even though we’re locked down again.

What kind of effect has this wild year had on your music, if any?
It’s forced me into the studio and off the stage, so I think it’s gotten a little more experimental. The song structure stuff I was talking about was definitely a product of 2020. I’ve been making some lo-fi hip hop “study beats” on the side too, which I’ve never done before.

Your band has released some great tracks in the last couple of months. What can we expect in the upcoming months from The Sometimes Island?
Thank you! There’s a whole EP coming up, and I’m working on a series of releases that are much more just songs, stripped down in their production, with a focus on storytelling.

Desert Island question! You’re stranded on an island with all of your shelter and food provided for, you can bring one artists’ entire catalogue, one album, and one single to listen to for the rest of eternity. What you bringing?
Wow. I love these questions. This is the kind of stuff I talk about whenever we’re having beers. I’d bring The Beatles’ entire catalogue because it’s enormous and endlessly entertaining. I would bring OK Computer by Radiohead as the album, because it’s so good from front to back. For the one single I’d bring Still D.R.E. by Dr. Dre and play that first thing in the morning every day.