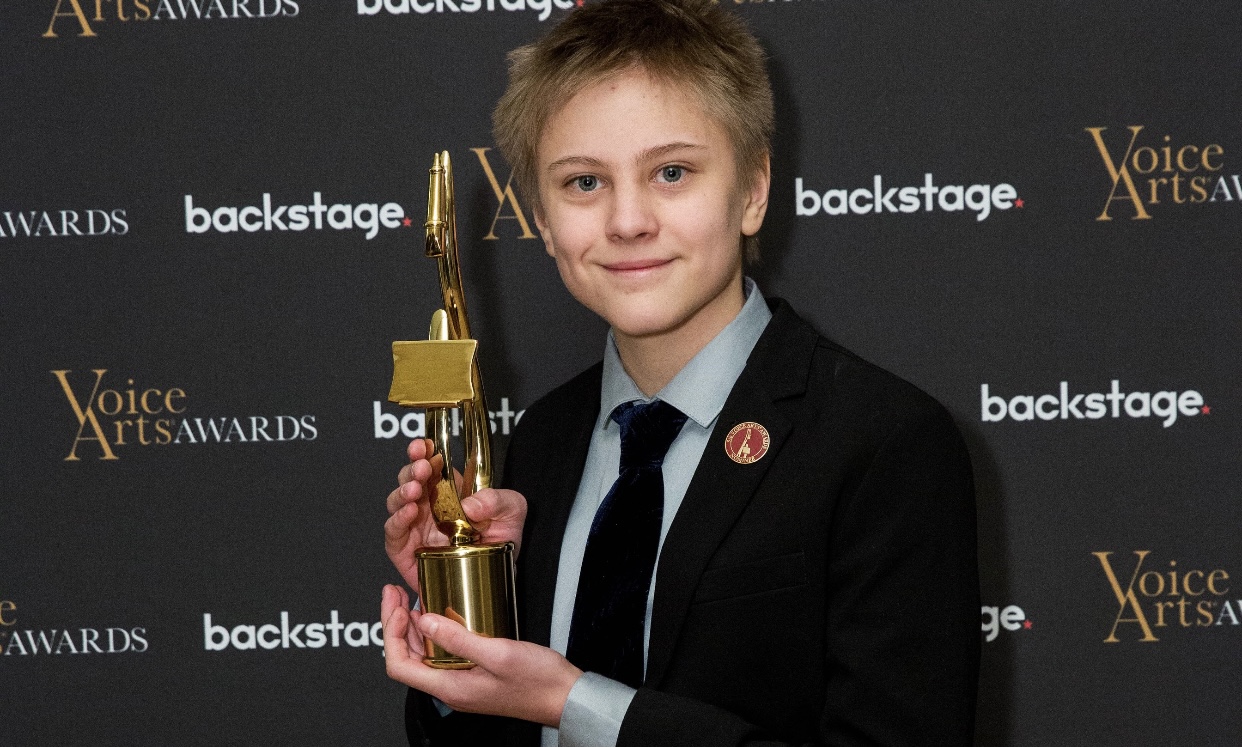 Recognized by the SOVAS™ Voice Arts® Awards and Young Artist Academy™ for his excellence, Dogen Eyeler is a voice artist and actor who has worked on projects for Nickelodeon and Warner Brothers.  Dogen plays Elliot Peterson alongside Grayson Thorne Kilpatrick, who plays ‘Pork Chop’ Lawrence Chubbs, in the 80’s inspired horror film, Black Pumpkin, streaming on various platforms December 8th.

HI DOGEN! PLEASE, BRIEFLY INTRODUCE YOURSELF, WHO IS DOGEN EYELER IN YOUR OWN WORDS?
Hi, I’m Dogen Eyeler. Like many people my age, I like playing video games with friends. I also enjoy playing drums and debate class. I do some acting and voiceover work.

WHEN AND WHY DID YOU CHOOSE THIS CAREER?
In third grade I would accompany my sitter to her auditions, if they were at the same time she was taking care of me. While at one of her auditions, I was asked if I wanted to audition too.  I was really shy.  Later, I asked my sitter about acting. She told me it was a paying job. They say I said,” I can do that!”  They set up an account on LA Casting and I actually started working.  Then I got an agent.  Acting helped me work through my shyness.

WHAT DO YOU LIKE MOST ABOUT YOUR JOB AS A VOICE OVER ARTIST?
Something I like about doing voice acting, is that you don’t have to worry about what you look like. Much of the time, you’re recording in your own studio, so no one sees you. Voice artists joke about “studio hair” which I may have all the time. You’re also cast based on your voice acting, not how you look.

Something people may not know about voiceover, is that the actor often doesn’t know what the other characters’ lines are.  It’s just you interpreting the material, based on the direction you may or may not be given.

It is fun when you get to work in the studio as an ensemble, too. There’s an energy when you’re responding to another voice actor’s lines. That’s one of the things that makes on camera acting fun too; working with a group of creative people, and getting to know them.

WHAT IS YOUR GREATEST STRENGTH, AS AN ACTOR?
I’m told my greatest strength is my intuition.

WHAT ARE YOUR BEST PROJECTS TO DATE AS AN ACTOR AND A VOICEOVER-ARTIST?
The best for me, was the film Wildness. It’s special because the story is true.  Being trusted to portray a real person is an honor. I liked helping share the life of my character Dennis Binderup, his dad “Wild Bill” and their family.  Sarah London is the writer/director/producer. This film is about her family, the difficulty they had as a mixed Japanese-American family after World War II, facing discrimination in San Francisco. There is some innovative bank robbing involved too.

Sarah and Amy Schmidt (producer) were extremely encouraging and nurturing. The cast was like family.  We shot some of the film on location in Ojai. I had scenes with Timothy DePriest, Maku Ursu, Miley Yamamoto, Olivia Wallace and Tucker Brown.  They were excellent. The crew was just as talented.  The best part was being the only kid on location for the night scenes with Timothy, Maku and a small crew.  It was cold, dark and amazing.  I felt like I did my job well, and we all fit in. We stayed at a hotel together and it was so much fun.

WHAT’S NEXT FOR YOU?
I really enjoy playing drums.  Getting a group of friends together and playing music is something I want to do.

Black Pumpkin by Ryan McGonagle, is available on December 6th.  It was very fun to shoot!  I play Elliot, who unknowingly releases a dark force with his buddy, while doing a school project.

Soul of a Typewriter by Nadim Tebyanian, will be released in festivals soon.  I play Young Devin, an up and coming writer, who has a close relationship with his grandpa.

ANYTHING ELSE YOU WOULD LIKE TO SHARE WITH OUR READERS?
I’m working on a charity project called Giving Hope with Soap for Dare to Care for the Homeless, a non-profit organization in Long Beach, California.  They provide assistance to women and children who are experiencing homelessness. These families need help with shelter, food and necessities, such as hygiene products.

Giving Hope with Soap is a simple way you can get involved, by donating much needed soap and hygiene products.

We take it for granted, but having soap to wash up, makes a difference in how a person feels and that affects one’s interaction with the world. Access to soap is a basic necessity and more important today, with the fight against viruses like Covid- 19. In order to follow the advised 20-second hand washing, people need soap. Please consider donating.

To find out how to donate soap and hygiene products, visit GivingHopeWithSoap.com . Your help is appreciated.

“Muha Meta”, the newest track by Muha Meds is a personification of his personality