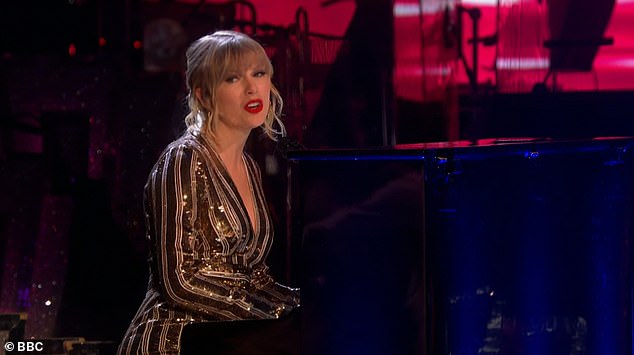 Taylor Swift stunned everybody in her gold ensemble, while singing her hit song Lover on the piano, the song appeared to be a reference to beau Joe Alwyn.

Taylor was looking sensational in her black-and-gold jumpsuit that was fitting snugly on her slender frame as she sat in front of the piano. Her gold ensemble had a plunging neckline that brilliantly showed off her cleavage. The singer did not opt to wear any accessories so the whole attention remained on her ensemble.

She was wearing her golden locks swept back into a loose bun and she wore a slick of red lipstick to beautify her pretty features.

Taylor and beau Joe Alwyn have been dating for more than two years now, but the pair always prefer to keep their private life just that.

On Friday only Taylor celebrated her 30th Birthday with a star-studded bash at the Oscar Wilde restaurant in New York City and now she flew over to the UK especially for the performance.

The Star’s fans took to twitter to enthuse about Taylor’s performance. All her fans claimed that she looked ‘breathtaking and ‘incredible’ while performing on the stage. One of the fan even wrote in adoration: ‘Taylor’s performance of Lover on strictly tonight was incredible! I loved it’. While another wrote: ‘ALSO TAYLOR SWIFT ON STRICTLY IS EVERYTHING I HAVE EVER NEEDED #strictly’

One fan even claimed that they ‘cried’ while watching Taylor perform, while another enthused: ‘TayTay can stay!’

Taylor allegedly described her latest work as ‘a love letter to love in all of its maddening, passionate, exciting, enchanting, horrific, tragic, wonderful glory.’

In January only Joe confessed that he doesn’t think that his relationship with the singer should be seen as ‘strangely private’ as other people have been interpreting it. In an interview, he said, ‘I don’t think anyone you meet on the streets would just spill their guts out to you, and therefore why should I?

Further he added, ‘And then that is defined as being “strangely private”. Fine. But I don’t think it is. I think it’s normal.’

A Guide to Investing Your Business Profits