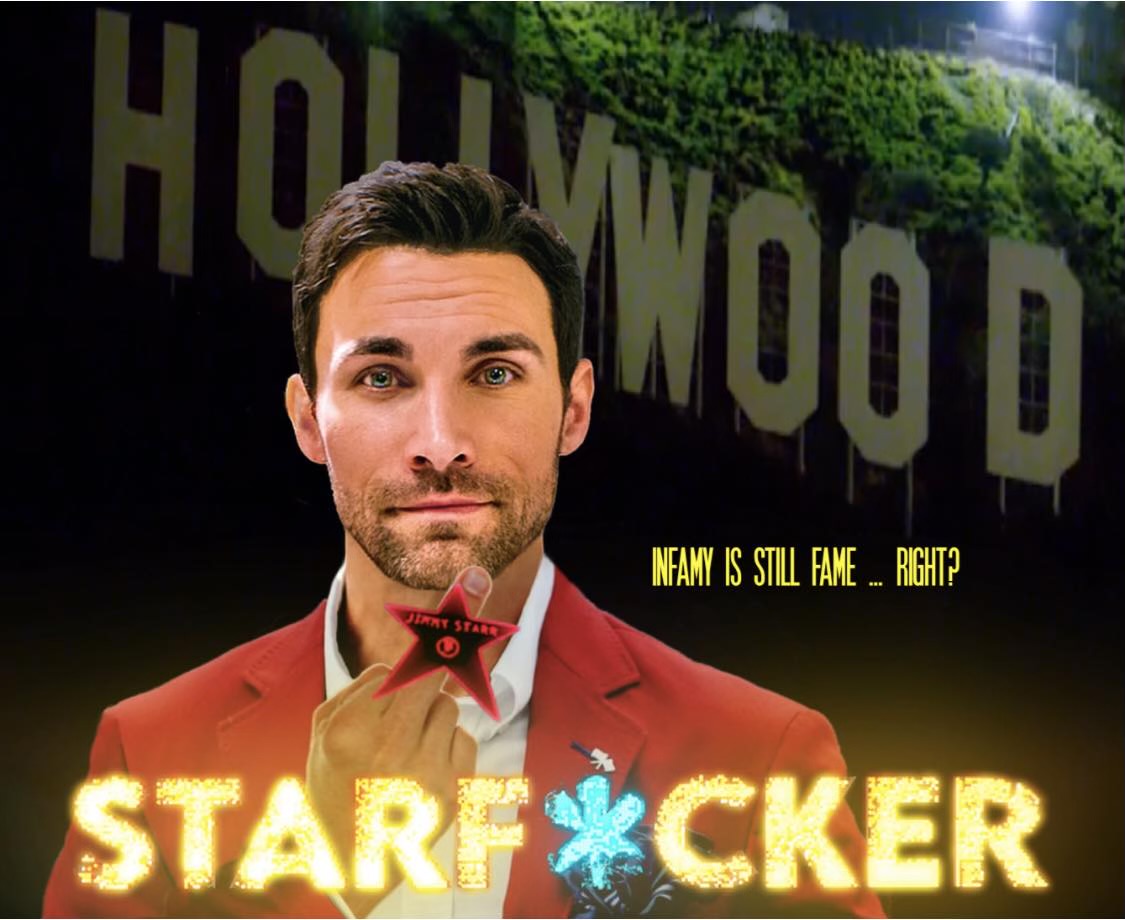 HI ERICK FELLOWS, WELCOME TO ABOUT INSIDER! THANKS FOR TAKING THE TIME TO CHAT WITH US! CAN YOU TELL US A LITTLE BIT ABOUT YOURSELF?
Thanks for having me! I’m originally from Maryland , I grew up as an only child to an Italian mother and a Swedish and English father. My first love was basketball and was scouted in high school to play overseas in Italy, but  during my junior year of high school but with an unfortunate turn of events I had an injury during a summer league game which would hold my basketball plans and ended up diverting  my career path. I ended up getting introduced to a modeling agent in washington ,DC and i ended up signing with them and shortly from there i moved to NYC to pursue a modeling and acting career which has led me to present day living in los angeles 20 yrs later and i have now been in the film and tv business for over 20 yrs and still counting.

TELL US ABOUT YOUR LATEST MOVIE STARF*CKER.
Well Starf*cker is definitely  a wild dark comedy , comedy and drama ride! It’s a very original piece that we created. It’s a story that follows an actor named Jimmy Starr while  showing the dark underbelly of Hollywood and all the trials and tribulations that comes with someone trying to manipulate their way to stardom. Only for all of it to come crashing down on him before his own eyes , and to be taught multiple lessons along his journey and hoping to find some fame along the way. Only to find his ex fiance and brother who has now come back into his life. This has ultimately changed his path and changed his narcissistic and addictive ways for the better.

HOW AND WHEN DID THE IDEA OF THE STORY CAME?
The story was brought to me about 6 yrs ago by my good friend and Director/ writer / producer Mark David. Him and I had just come off another film that we just wrapped called Jonny’s Sweet Revenge. He brought it to me saying , so I wrote a script called ( Land of Milk and Honey) the original working title, he had written it 5 yrs before and never was able to pull it all together and had not met anyone that was right for the role of Jimmy Starr. His words and I quote were: I have this insane script I wrote about 5 years ago and after all this time I want to finally make the film. He continued to say , and I want to make out with you as the Lead role of Jimmy Starr, he said because you are him. He proceeded to explain to me who Jimmy was and the first thing i said , wow! That’s what you think of me? hahaaha. I said idk man, I don’t think I want to take risks and 1/ making a MOVIE ABOUT HOLLYWOOD AND 2/  I’m scared to play a role this intense and offensive to Hollywood. So I originally turned it down. But since Mark is just a great salesman, after some time I was convinced to play the role of Jimmy Starr by Mark David. Next thing I know I fully trusted him and now found it my challenge to play Jimmy and bring him to life. Since the film is out and getting reviewed well, I look back and want to thank Mark David for believing in me and taking the chance on me playing the role of Jimmy Starr. It has been one heck of an experience and I’m so thrilled the audiences that have seen the movie so far have loved what we made.

WHAT IS YOUR SOURCE OF INSPIRATION? HOW DO YOU CREATE FRESH CONCEPTS?
I watch a lot of films, actors and producers / directors, in which I had great admiration for. I study their successes and their failures. I spend a lot of time learning a lot of information on these people and anyone I find that has something to offer and keep me intrigued. It has taught me as an actor and producer  that we should never stop investigating and researching life and what it has to offer us.

HOW IS STARF*CKER DIFFERENT FROM THE MOVIES THAT YOU HAVE CREATED IN THE PAST?
Well Starf*cker is definitely its own beast. It is a 3 genre film. Being a dark comedy, comedy and drama gives it so many different and unexpected layers to it. That a lot of other films being just one particular genre doesn’t really have the ability to do the same as Starf*cker. Anytime you make a film about the rise and fall of someone trying to make it to the top in Hollywood , and you try to put the Hollywood culture  on blast, you are always  taking huge risks at being shunned away by the industry.

HOW LONG DID IT TAKE TO RESEARCH AND MAKE THE FILM?
making the film was a 4year process , being that said , we started filming the movie with no expectations really of  knowing we were making a strong contented film that could very well get bashed. So in the midst of filming the movie , the #metoo movement had started and put a damper in our plans with the film not making it easy to finish the film and almost scaring us away from even finishing the film.  We finally decision  to pick up after 2.5 years of shelving the film . We went in and reshot bigger venues and darkened the storyline to give it more an authentic feel.  I’m so happy for the changes from the original, I couldn’t be happier with the outcome of this movie

WHAT’S SOMETHING WE SHOULD KNOW ABOUT THE FILM THAT MIGHT SURPRISE US?
That we filmed the movie over a 4 year span before delivering the movie you see today.

WHAT IS ONE MESSAGE THAT YOU WOULD LIKE TO GIVE TO OUR READERS?
I would like to say , this film was done with everyone’s efforts , blood sweat and tears and a ton of favors from many different departments in this business , to give you the Starf*cker that  you’re watching! We all worked our butts off to get this movie out there and seen.

Louie Knows, Mooluh, and S3nsi Molly link up at KNOWS Studios for “Beg for It”…