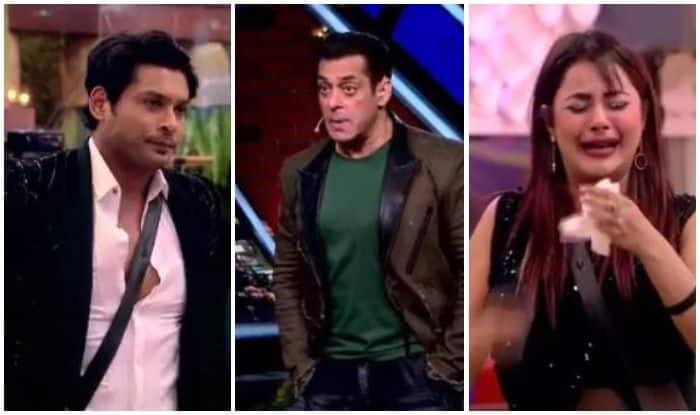 Bigg Boss Weekend ka Vaar was again full of drama and chaos. However, this time it was not two anti-party people but the two in the same party that’s Shehnaz Gill and Sidharth Shukla. God only knows shy Shukla is always common in every drama, but it’s okay as long as it’s Bigg Boss House, as you need to be more and more involved in something or other in order to show your strong presence in the house. Shukla’s presence seems more than strong in the house, especially when it comes to some issue or panga!

The episode started with Salman Khan congratulating all the housemates for getting nominated. Salman asked Paras Chhabra on what basis does he thought people will save Mahira Sharma. Shehnaz and Mahira started arguing as the former starts talking about Mahira being confident about being saved.

Salman then asked Mahira on what issue does Shehnaz have with her. Mahira said that she never had issues with Shehnaz. Salman told Mahira that she does have issues with Shehnaz and its evident.
On which Shehnaz gave her stand saying that she will continue to play her own game and she doesn’t belong to anyone. Shehnaz also said that she hates Mahira’s tone and her attitude. Mahira on the other hand said that Paras called Shehnaz ‘jealous’ and not her.

When it was Shukla’s turn, he said that hurt is the right word and not jealous that made everyone burst into a laugh. However, Shukla poured green water in Mahira’s bucket to make Shehnaz feel better.
When Shukla goes and hugs Shehnaz, she hits him. And Shehnaz broke into tears and asked Salman if he also feels she is jealous. Salman said that she is indeed jealous and what’s wrong with that.

Mahira said that Shehnaz’s tears are fake. Even Shefali also poured in Shehnaz’s bucket, and Salman cries funnily. Seeing all that Shehnaz started crying uncontrollably. And when Salman tried to talk to her, she said that she doesn’t want to listen to him as well. All that made Salman lose his cool and he asked Shehnaz to behave respectfully. She then said that she doesn’t want to stay here that made Salman more irritated and he asked her to leave the house right away. Also, he warned Shukla that Shehnaz is in love with him and it is evident. Later Salman even made a surprise entry in the house.

Let’s see whether Shehnaz will be evicted from the house or somebody else but one thing is sure, yesterday episode surely will change Shehnaz Gill personal brand and her image.

Let us know what you think… you can share your opinion by participating on our Twitter @AboutInsiderCom Personal Brand Poll ” Will Shehnaz Gill Image Suffer as Salman Khan warns Sidharth Shukla? “

How Do Banks Make Money?

Some of The Best Places to Live in Northern New Jersey