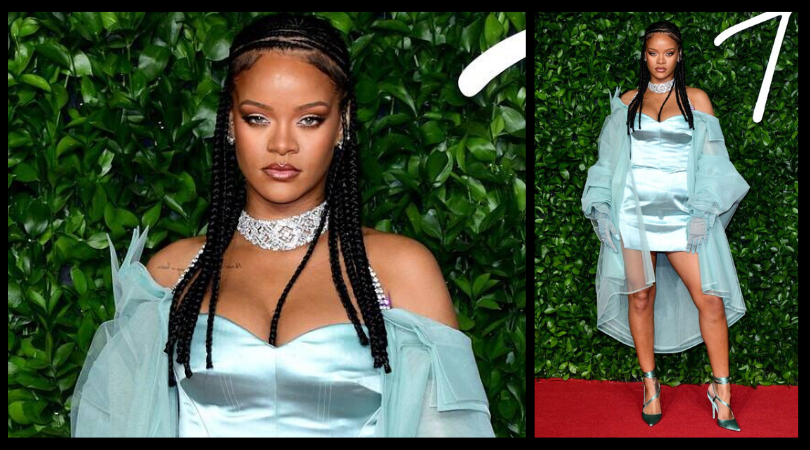 British Fashion Awards, the event that was held at London’s Royal Albert Hall was no less than a starry night as the event was honored by celebrities, including Super Model Naomi Campbell, Hollywood stars Julia Roberts and Cate Blanchett and singer Kylie Minogue.

Rihanna, who led the glamour in sultry mint green mini dress joined Cate Blanchett and Julia Roberts at the star-studded British Fashion Awards 2019 that was held in partnership with Swarovski at the Royal Albert Hall in Kensington, London, on Monday night.

It was one of the biggest fashion nights of the year, where the red carpet was allegedly full of supermodels, Hollywood stars, style icons and designers making a style statement.

And Rihanna amongst all made sure to lead the glamour while she joined Cate Blanchett and Julia Roberts at the event. The 31-year-old, made a grand entry in a halter neck mint green satin mini dress and with that she wrapped a matching sheer dress coat, with which the singer wore a pair of complementing gloves and satin strappy heels. Also, she sported a statement diamond choker around her neck along with diamond earrings.

It’s not just that, in fact, Pop Singer’s Fenty label was also amongst one of the recipients, as her label received the Urban Luxe award at the event.

Besides, Bottega Veneta’s creative director Daniel Lee allegedly came out to be the biggest winner at the British Fashion Awards on Monday. And industry veterans Giorgio Armani and Naomi Campbell were also honored at the event.