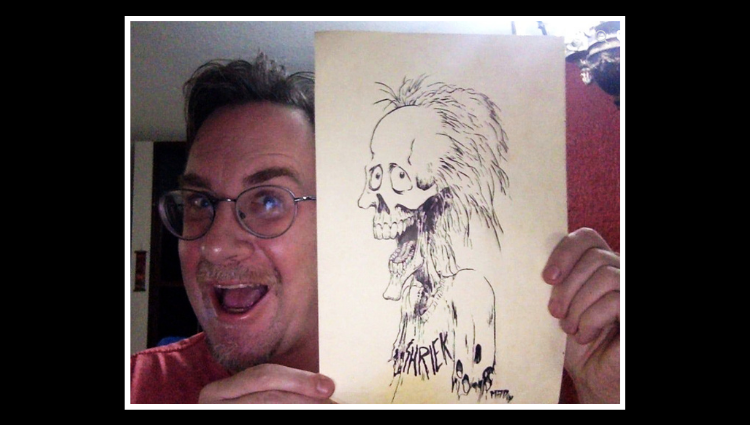 Storycraft podcast is welcoming SciFi fantasy artist Mike Dubisch back to the show as a guest host in mid-2021.  Hosted by illustrator-filmmaker Kraig Rasmussen, based out of Phoenix, Arizona, Storycraft talks with figures from music, art, comics, comedy and journalism.

Mike Dubisch has emerged as one of the most prominent artists in the science fiction, horror, and fantasy genres. His disturbing yet beautiful visions cover the pages of the new literary magazine, Forbidden Futures, which’s making big waves in the “Strange Fiction” world of literature. Published by “Oddness,” a company owned and run by Daniel Rinquist of San Francisco, the sometimes grim but always strange magazine is worth the cover price.

Mike first began as a radio host in 2010 on the radio show “Art of The Red River” from Red River Radio and produced by April Robins. The show featured guests from various sectors of the art world, exploring the business, struggles and joys of being an artist. After three years on the show, Mike moved on to guest hosting on Storycraft Podcast for a couple of years. A move to Mexico in 2019 had him leave the show for a time, but now he is thrilled to be returning.

Mike Dubisch defines himself as an artist, illustrator, traveler, and instructor. In reality, he is much more than that. He is one of the leading figures from America’s underground horror comics. He worked for the Dungeons and Dragons franchise (role-playing games) and created art from HP Lovecraft’s Cthulhu Mythos.

Mike is originally from New York and studied at Manhattan’s The School of Visual Arts, on East 23rd St. He began drawing semi professionally at the tender age of 15 for a comic anthology series called “Gore Shriek”, however, his first commission was earned at 17 when he illustrated a catalog of dinosaurs at the New York state museum. His work since then has brought him around the globe from San Diego to Morocco to Argentina. He currently lives in Mazatlán, Mexico, with his family.

The Storycraft podcast can be found on Podchaser, Soundcloud and Apple Podcasts. Be sure to tune in to new episodes of Storycraft, released each week, and learn the ins and outs of being a creative professional!

Why Moving Your Company to North Carolina is a Good Idea

Sanna Marin said “flexible working arrangement could be the “next…