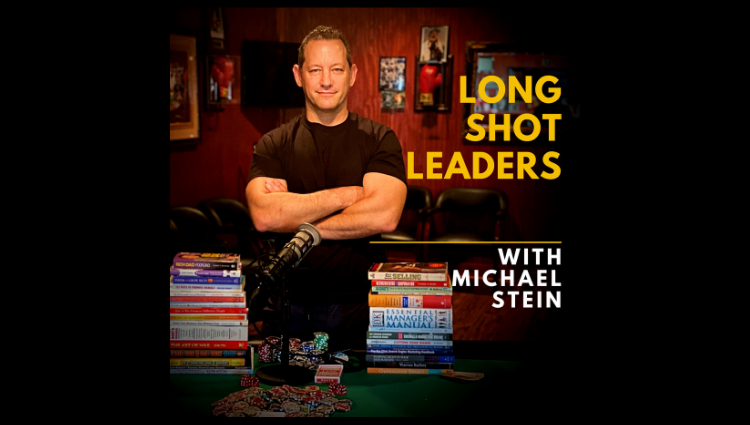 Michael Stein is the host of the podcast Long Shot Leaders with Michael Stein. He has been and writer, director, producer, actor, comedian, worked with academy award winners and some of the most influential people in the entertainment industry, and he has built a 100 million dollar + company with zero funding.

Why are you doing a podcast about “Underdogs who have found success”?
I was an unplanned child, born over two months premature, with immunity issues. Growing up, I was diagnosed with a “learning disability”, Dyslexia, and had a bad stutter.

I grew up in a broken home. I was weak, riddled with health challenges, frequently confused, felt out of place, socially awkward, quiet, hyper, and impulsive.

What was it like playing Dirk Diggler in Paul Thomas Anderson’s “The Dirk Diggler Story” (the short film to “Boogie Nights”?)
I was young, and It was the first thing I ever acting in. I learned a lot about indie film, and when that turned into “Boogie Nights, it made me realize the efforts can pay dividends in the end.

Did you really spend your life savings and go broke to make your own films?
Yes indeed. I was the top nightclub promoter in Los Angeles, and I made a lot of money, but I wanted to be a filmmaker, so I walked away from the nightclub business and spent everything I had on making movies. But it forced me to start a business to pay for another film.

How does someone build a business that makes over 100 million dollars with no money?
Well, in my case, I started with desperation. I wanted to make a film, and there was no way Hollywood was going to let me make that crazy script I write (Love Hollywood Style) So, I started a business to get me the money to make the film because I was broke and nobody would give me the money to make the film. So, I would say desperation, hard work, the right timing, and some luck.

You started stand-up comedy when you were 19. Were you scared?
Of Course! Doing stand-up comedy is scary; nothing but you and a microphone. But it was even scarier when I first started.

On your podcast, “Long Shot Leaders”, who so far has been the most prominent “underdog story”?
The holocaust survivor Ben Lesser. He went through hell and back but survived and then prospered.

What is your favorite thing about podcasting?
I am meeting new people. I love to study their wants, needs, and history.

What’s next for you?
I am directing a documentary about making my crazy film “Love Hollywood Style” It’s about people who will sacrifice everything in life for the obsession of their art.

Brandon Riley is our new discovery. Learn more about his musical journey in this interview!

About Insider talks to New York based Actor Robert Leckington

Top Social Media Challenges for Nonprofits and How to Overcome Them