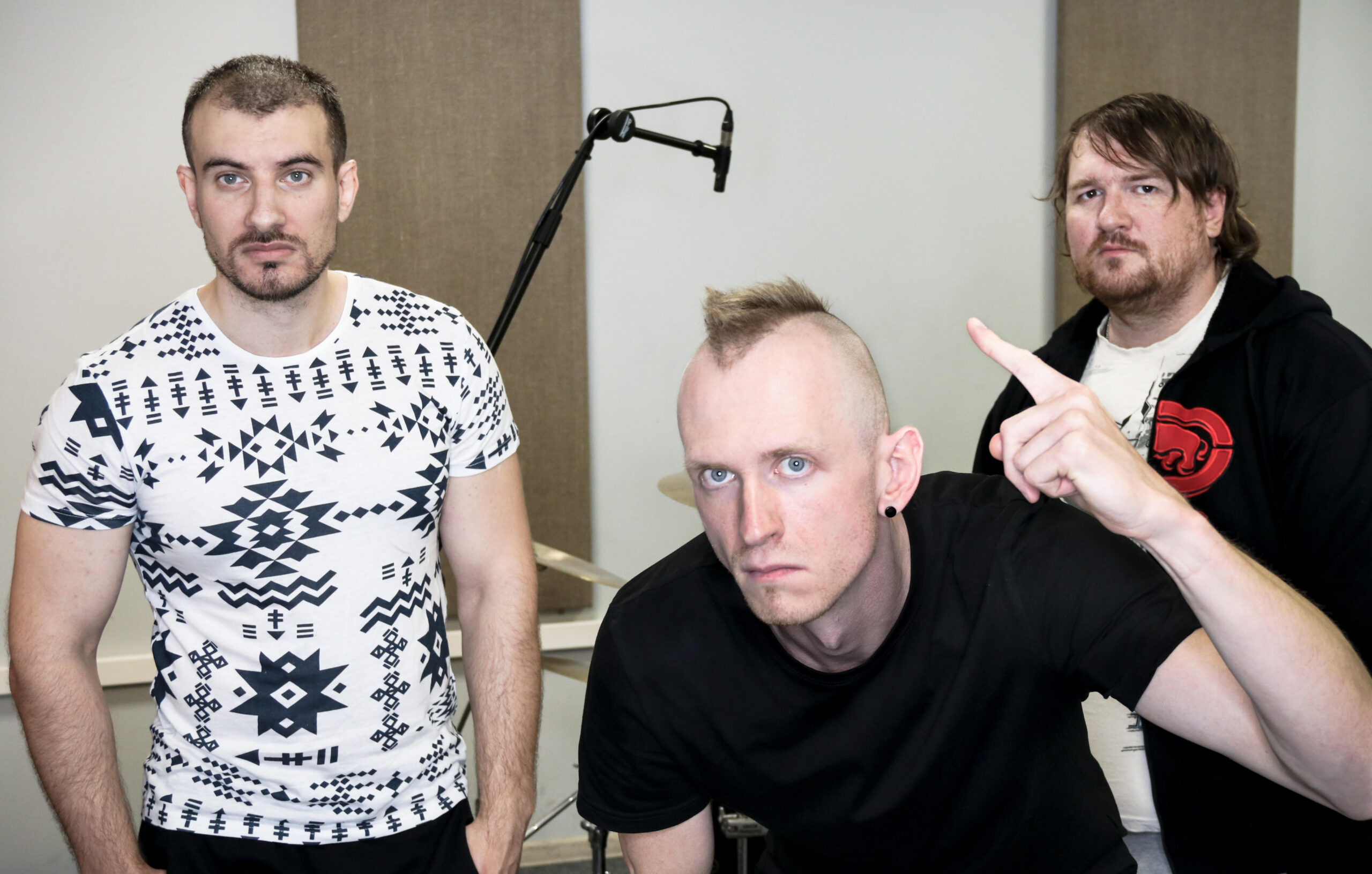 HEY GUYS! THANKS FOR TAKING THE TIME TO CHAT WITH US! CAN YOU TELL US A LITTLE BIT ABOUT YOUR BAND.
Hi there, and thanks for having us! It is the three of us: Andrey (guitars), Eli (vocals and bass), and Tooz (drums), and we are huge fans of analog sound, big acoustic drum kits, and down-tuned seven-string guitars!  Together we are Mazemile – a self-produced alternative metal band from Moscow.

HOW DID YOU GUYS MEET AND HOW DID YOU KNOW THAT, YES, WE CAN ROCK TOGETHER?
Well, Andrey and Eli have known each other for pretty much as long as they can remember themselves. Back in 1998, Andrey discovered Korn’s Freak On A Leash music video while watching MTV and immediately decided to start playing an electric guitar. As he needed someone to sing along to his playing, he persuaded Eli to give it a shot. Since then, the two had formed numerous bands together until 2016 when they were joined by Tooz, who was at the time sifting through message boards in a search for the next big project to take part in. We tried writing a song together, and it turned great – this was when we realized that we don’t really need any more people in the band and should rock on forward!.

HOW WOULD YOU BEST DESCRIBE MOSCOW, RUSSIAN STYLE OF ROCK-METAL MUSIC?
If we talk about metal music, it is mostly about screaming and open string riffs, ha-ha! If we are being honest, though, the majority of rock and metal music made here feels somewhat secondary to the music that originates from the West. And it is not like we think of ourselves as someone who is an avid example of the opposite. We readily embrace the style of 00’s alternative metal, mix in some post-grunge, and comfort ourselves within the resulting frame through experimenting with sound production.

HOW DO YOU THINK YOUR HOMETOWN HAS INFLUENCED THE SOUND AND HOW YOU ALL CARRY YOURSELVES IN THIS GROUP? HOW HAS THE MUSIC SCENE THERE CHANGED OVER THE YEARS?
Frankly, it is hard to say that our hometown has inspired us much or influenced the sound. Moscow is big, diverse, and with so many people involved in making music around here, you could easily find artists of every imaginable sort, style, and caliber. Thanks to that, each of us had his own fair share of opportunities to try himself in whatever musical direction he would like. But at the end of the day, we decided that we should focus on making music we grew up on and, to some extent, even isolate ourselves from what everyone else is doing.

Over the past ten years, Moscow got integrated into the global music scene. And before COVID hit the entertainment industry, we were lucky to enjoy the shows put up by most internationally successful acts quite regularly. It was even possible to snitch yourself some tickets and go watch shows by less-known European and American artists and make new friends and connections this way. A lot of beautiful and great-sounding venues and arenas have emerged here over the past several years, too. Actually, so many that we haven’t checked them all out yet with our busy production schedule!

LET’S TALK ABOUT YOUR NEWEST SINGLE, “RED” WHAT WAS THE INSPIRATION FOR THIS SONG? HOW WOULD YOU SAY THAT IT COMPARES TO ANYTHING ELSE THAT YOU HAVE RELEASED?
We touched upon the actual events that led to the writing of Red in the interview for the Vents Magazine (and you are welcome to check it out as well). So here is a little different way of looking at it. We think that most people would agree that there’s a certain apocalyptical vibe to everyday life if you look at it through the prism of mass media and omnipresent Internet connectivity. It is as if humanity was progressively picking up the pace but no one would seem to understand where exactly we were headed. This was the primary idea behind Red’s lyrics. The very last line in the chorus – “warning with its glow, [the] sky is turning red” – was meant to bring up this exact question: where are we headed? In our everyday life, in our dreams & ambitions? Each of us, and what sum does it make for on the whole? And the allusion to sunset was summoned to further dramatize this insecurity, make it more visual and appear more imminent.

In terms of overall production Red is slightly different from other songs that we have released or are about to release. It relies on a simple & classy chord progression, lower-than-usual vocal part, straight groove, and generally feels simpler. For us, it was definitely a step towards accepting the “less is more” principle, and we are happy that we were able to take it.

GENERALLY, HOW DOES THIS BAND GO ABOUT WRITING YOUR MUSIC? DO YOU WRITE TOGETHER OR SEPARATELY? WHAT IS THE FIRST STEP IN YOUR MUSIC-MAKING PROCESS?
The first step in making a new song is always getting a six-pack… Just kidding. In actuality, Andrey usually brings in a very concise and well-thought guitar demo that makes the gears start turning. It then gets a midi drum part written or played on an electric drum kit by Tooz. Once the demo with the updated drums hits Eli’s inbox, things usually get difficult. Some parts are altered or removed altogether, the BPM and the key of the song might change, maybe even a couple of times… All this for the song just to get a proper vocal melody. And yes, lyrics always come after music, as music serves as the primary inspiration for the meaning of the song. From this moment on, the demo is emailed back and forth between all three of us until it feels good enough for everyone. This negotiation process can take up a significant proportion of time spent on making the track overall, but, in return, it acts as a failsafe for us.  When the pre-production demo is finally ready, it is spelled out to the detail and simply does not allow for any more doubts. This lets us begin the recording process without second-guessing our production decisions.

WHOSE MUSICAL PERFORMANCE STYLE MOST INSPIRES YOU?
We could agree on a couple of bands whose performances could be named the most inspirational for us. One of them is Limp Bizkit, with their exceptional ability to interact with the crowd, Wez Borland’s unique style, and one of the tightest live rhythm sections out there. On the other side of the spectrum are Faithless and the unrivaled energy level of their live shows.

I ALWAYS LIKE TO ASK BANDS IF YOU ALL HANG OUT SOCIALLY APART FROM THE MUSIC? WHEN YOU AREN’T WORKING ON MUSIC, DO YOU GUYS HANG OUT FOR FUN?
We do occasionally hang out! However, these days life has been growing real intense. It has been forcing us to meet up and talk over our musical plans more than anything, kind of sacrificing our “family time”. But we still manage to get away with attending a live show or going on a short road trip every once in a while.

DO YOU HAVE ANY FUTURE TOURING PLANS SOON?
Not really. With the current situation with the limitations on live events, the best thing for us to do would be to focus on writing our second album. We already have about three new songs in the working, and so far they feel even better than most of what you’re about to hear on our upcoming album – “One”!

IS THERE ANYTHING ELSE THAT YOU WOULD LIKE TO SHARE WITH OUR READERS ABOUT YOUR BAND?
Yes! We are all about interacting with our fans (who are mostly our friends) and we absolutely love when people take a minute to reach out and say hello, comment on our music or tell us how it is affecting their everyday life. In return, we like to celebrate our fans, so we decided to start a tradition of treating you guys with free giveaways of merch and such. If you want to dial in and take part – be sure to check out our Facebook page at www.facebook.com/mazemile to see what’s cookin’!

P.S.: Andrey is also a huge proponent of cross-cultural interactions. He would like to use this chance to say hello to his new friends: Emmalie and Elizabeth in Dallas, TX. 😉

Are you doing something constructive or waiting for the lockdown to subside?