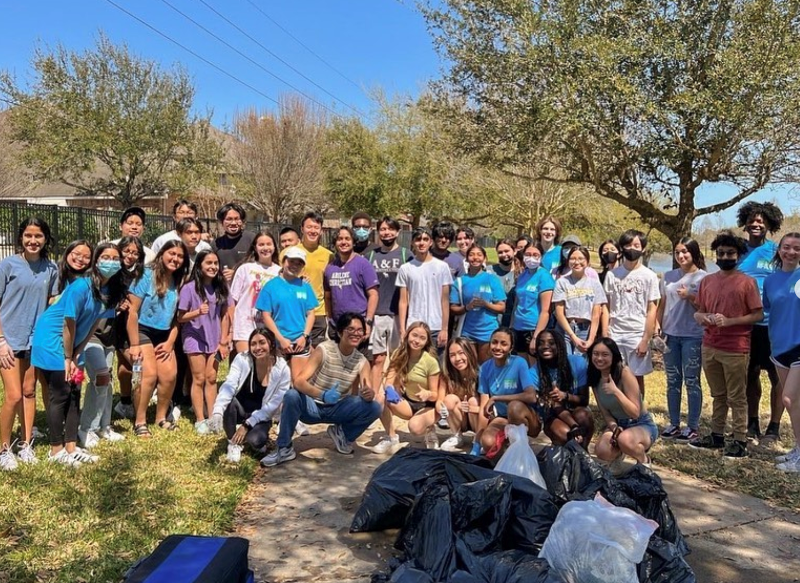 A climate crisis is upon us. We are experiencing global warming, bleached corals, trash in oceans, overflowing landfills and microplastics in our water supply. This combined with excessive consumerism and overconsumption of resources is a recipe for disaster for mankind. Recycling systems are systematically flawed, composting is inconvenient, and our landscapes are completely trashed. The idea of reusing materials is still alien on a mass scale. On top of that people don’t usually know how to properly recycle.

A Houston-area teen decided to take action. She mobilized an army of youth volunteers to make a difference. Anjali Narayanan, the founder of Recycle FAN, a registered 501c3 non-profit organization, took it upon herself to motivate not only her peers in the neighborhood but also those nationwide.

“After witnessing adverse climate in the last few years such as the biblical floods of Hurricane Harvey and dark, cold and frozen nights during winter storm Uri in South Texas I knew the climate crisis was upon us and indeed affecting my community and the people that I love!” said Narayanan.

Narayanan first started this initiative as a school club at Travis High School in Richmond, TX with just 3 members. She explains that it was hard at first. She felt demotivated initially to continue the project as it was extremely difficult to recruit students volunteers. Yet, she persisted and grew her club through social media to over 100 members just at Travis High School during the pandemic.

Narayanan decided to expand the club into a network. Other chapters of the club were created in local area schools. There are now 12 chapters across the state of Texas and another 18 in the rest of the nation. The community now includes more than 500 members.

The club was very active and effective — they have cleaned up over 500 lbs of waste from community areas so far. They have also donated over 150lb of clothes Goodwill and the Fort Bend Women’s Shelter. They have turned over  500 plastic water bottles into bird feeders, key chains, and planters and 100 single use plastic bags upcycled by crocheting them into reusable bags.

Along with cleanup and community donations, they have also reached and educated more than 7000 people through school visits, social media campaigns and talking to local businesses. One area of education is around recycling effectiveness. Currently, their campaigns are focused on local-area restaurants and coffee shops and how, for example, they can better reuse their used coffee grounds and compost their waste on a local farm.

They hosted a webinar in this past February with local city candidates during elections to highlight climate change issues locally. Partnered with Texas Environmental Campaign to connect with Jordan Duncan (Texas environmental advocate) empowering Texans to fight pollution in addition to promoting 15 environmental campaigns.

Her passion and true zeal for environmental protection were very visible as leadership traits. Her volunteer team could see that clearly for themselves and they followed in her footsteps.

In her vision for the future, Narayanan said that she hopes that the community will learn about recycling and be self-motivated to do so. Her advocacy efforts would have provided additional incentives and she also hopes to deliver an innovation breakthrough. Her current focus is on improving food composting and helping farmers grow more organic food and end food security challenges. She is an inspiring teenager indeed.
To Know more about Recycle FAN visit: www.recyclefan.org and don’t forget to follow them on Instagram @recycle.fan

How To Save Money On Carpet Cleaning For Business Owner

“Can’t Stop Thinking Of You” has you dreaming about Singh D.’s music all night

Investing in Ethical Investment Funds: How and Why

Here are the 9 reasons to gift handicraft items