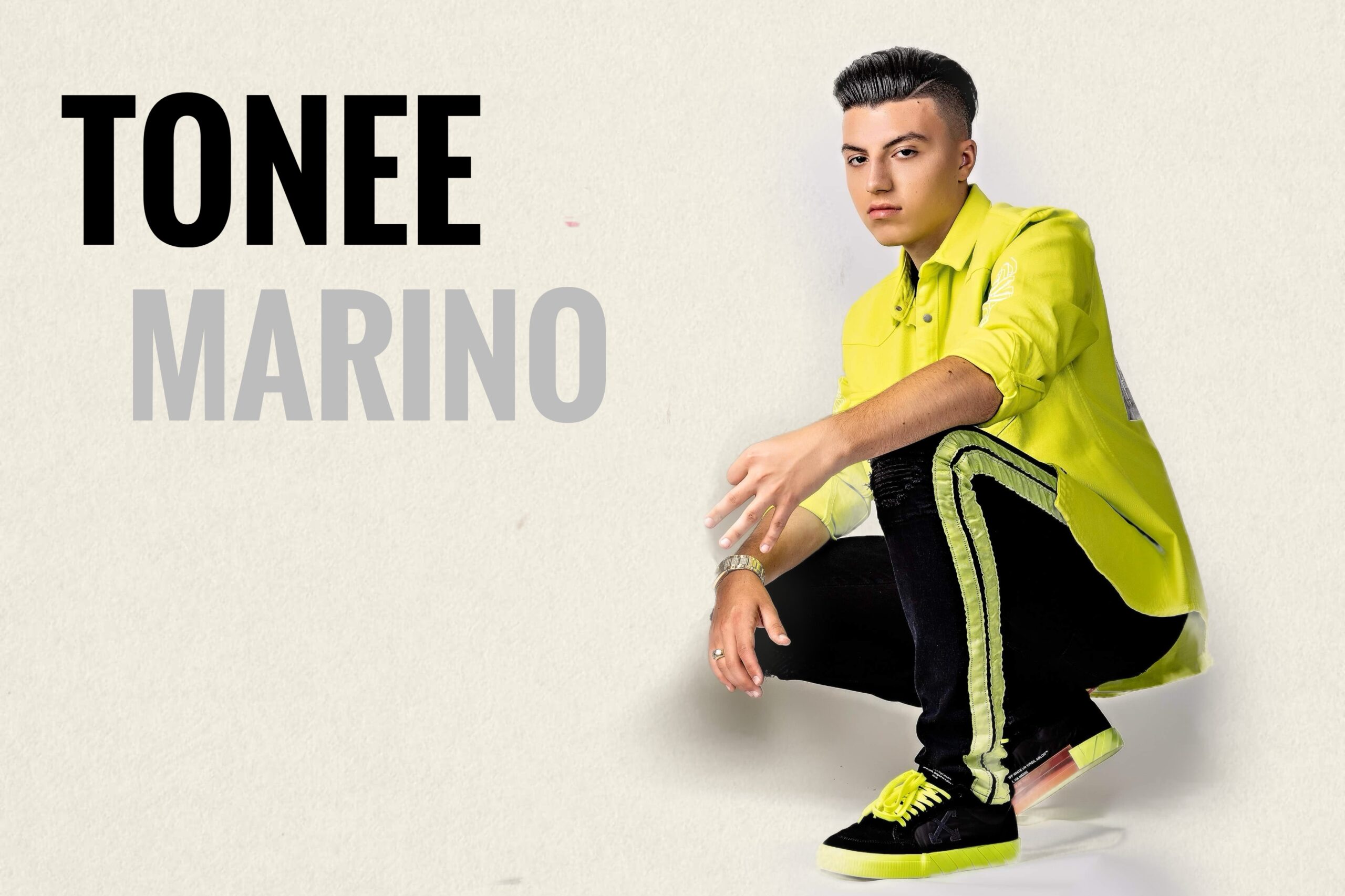 HEY TONEE! THANKS FOR TAKING THE TIME TO CHAT WITH US.
SO YOU’RE A RAPPER, MUSIC PRODUCER AND SONGWRITER! BUT FOR OUR READERS WHO DON’T KNOW WHO YOU ARE, COULD YOU TELL THEM A BIT ABOUT YOURSELF AND YOUR CAREER?
Hi, I’m Tonee Marino, a 17 year old independent rapper, singer, songwriter and producer from New York. I began writing my own lyrics and co-engineering my tracks in 2018 and I’ve been more consistent with releasing music ever since. My career has been steadily growing with current views totaling over 9,000,000 on YouTube alone and current followers over 320,000 across all social media platforms. At 15 years old, I have done live performances in 2019 at venues such as The Legendary S.O.B.’s and Citifield Stadium, which were great successes. After turning 16, I performed at Dj Magic’s Hot 97 car show, the Living To Inspire Festival at the Knockdown Center and created a theme song for the brand, as well as York College alongside artists such as Jay Critch. I’ve also done shows in various schools throughout the boroughs of New York City, and many more. I collaborated on a track with 4 x Platinum recording artist Zay Hilfiger, called “Oh Wow.” I was on the cover of 2020 Influencers Magazine NYFW Edition, cover of 2020 YV Hip Hop magazine April Edition and cover of 2020 Life is Art Magazine. I am also a cast member of a new reality TV show called “Next Big Thing.”

TAKE ME TO THE FIRST TIME YOU REALIZED YOU HAD A KNACK FOR MUSIC AND FOR HOW LONG HAVE YOU BEEN PRODUCING FOR?
I’ve always had a love and passion for music since I was a little kid, so I decided to put out a couple covers of popular songs on Instagram and YouTube. They continued to gain more and more traction, so I figured why not take music more seriously and put out some of my own songs? I started producing beats in 2017 as a hobby, but I really began to produce my own records professionally in the beginning of 2020. When I started writing my own songs and producing my own beats I knew that this is what I had to do, I born to do this.

WHEN DID YOU DECIDE TO START RAPPING AND HAVE YOU EVER WANTED TO DO SOMETHING ELSE?
I actually started out doing pop music. This was back when I put out my first few singles. When I turned 14 I decided to change gears moving towards rapping and hip hop music, because that’s what I had more of a passion to make. Even though my main focus is hip hop, I love to branch out and make songs that incorporate genres such as dancehall, R&B, reggaeton, and more.

WHAT’S YOUR FAVORITE WORD YOU’VE EVER PUT IN A RAP?
My favorite word I’ve ever used in a rap would be “Disconnected,” the song being “Disconnected” by me. It’s my number one streamed song on Spotify, and it’s a fan favorite. The word has many meanings, and feeling Disconnected is an emotion that people can relate to.

WHAT’S YOUR PROCESS LIKE FOR MAKING MUSIC? DO YOU HAVE A SET ROUTINE OR DOES IT VARY TRACK BY TRACK?
I usually like to start out with the beat. Now that I make my own beats, whenever I make/hear a dope melody in my head, the drums and 808’s come to me quickly. I don’t have a set process for writing lyrics, whenever I write, it’s just a vibe I catch. It usually takes around 10 minutes to write a song when I’m in my mode. The only “routine” I have is making sure I’m consistent, and dropping songs that sound different from the last. For example, if I were to drop a full R&B record, my next move would be to make something that’s completely rap. As for recording, I co-engineer with my engineer Jason Cummings. We have great chemistry and a speedy work ethic, so we can get out 2-3 songs in a 5 hour session.

PLEASE ALSO TELL US SOMETHING ABOUT AMAZON MINI-SERIES, NEXT BIG THING NYC?
Next Big Thing is a TV show coming soon to Amazon Prime. The show follows the life of me as well as 7 other successful teenage cast members who are all talented in different ways. There is some drama involved as well, so make sure you guys tune in! I also wrote and rap the soundtrack for the show, called “Stars.”

WHAT ARE A FEW KEY LESSONS YOU’VE LEARNED ABOUT PRODUCING THAT OTHER ASPIRING MUSICIANS AND PRODUCERS COULD TAKE ADVICE FROM?
The first key lesson I would give is to be yourself. If what you do is completely different from what’s “cool” now, chase that. What’s cool now won’t be cool forever, so you could have the key to the next new wave of music, no one succeeded without experimenting. I would also say that you MUST be consistent with your music. Understand that there are millions upon millions of people working to achieve the same dream you are, so to stand out beyond the rest, you have to be consistent. However, quantity and quality are both important, you don’t want to sacrifice either one. Have fun with what you do – I feel like the best music is created when you are just having fun. I think that if you don’t love and enjoy what you’re doing, then you shouldn’t do it. Lastly, DO NOT let anyone’s negative energy discourage you in any way. If people have the time to waste trying to bring you down, then that is their loss and waste of time. Focus on yourself, and don’t let meaningless energy or comments stray you away from your goals.

ANYTHING ELSE YOU WOULD LIKE TO SHARE WITH OUR READERS?
Follow your dreams! Anything in this world is achievable through hard work and faith! Find what it is that you love to do if you haven’t already, and do it to the best of your ability! Success will come, just be patient. There is no such thing as an overnight success. I love to see people win. Make sure you follow me on Instagram @Toneemarino and YouTube @Toneemarino, check out my latest song “Back Up” and watch my latest music video “Jefe.” Thank you!

Andrew Ochoa releases his newest track “From The Bottom”