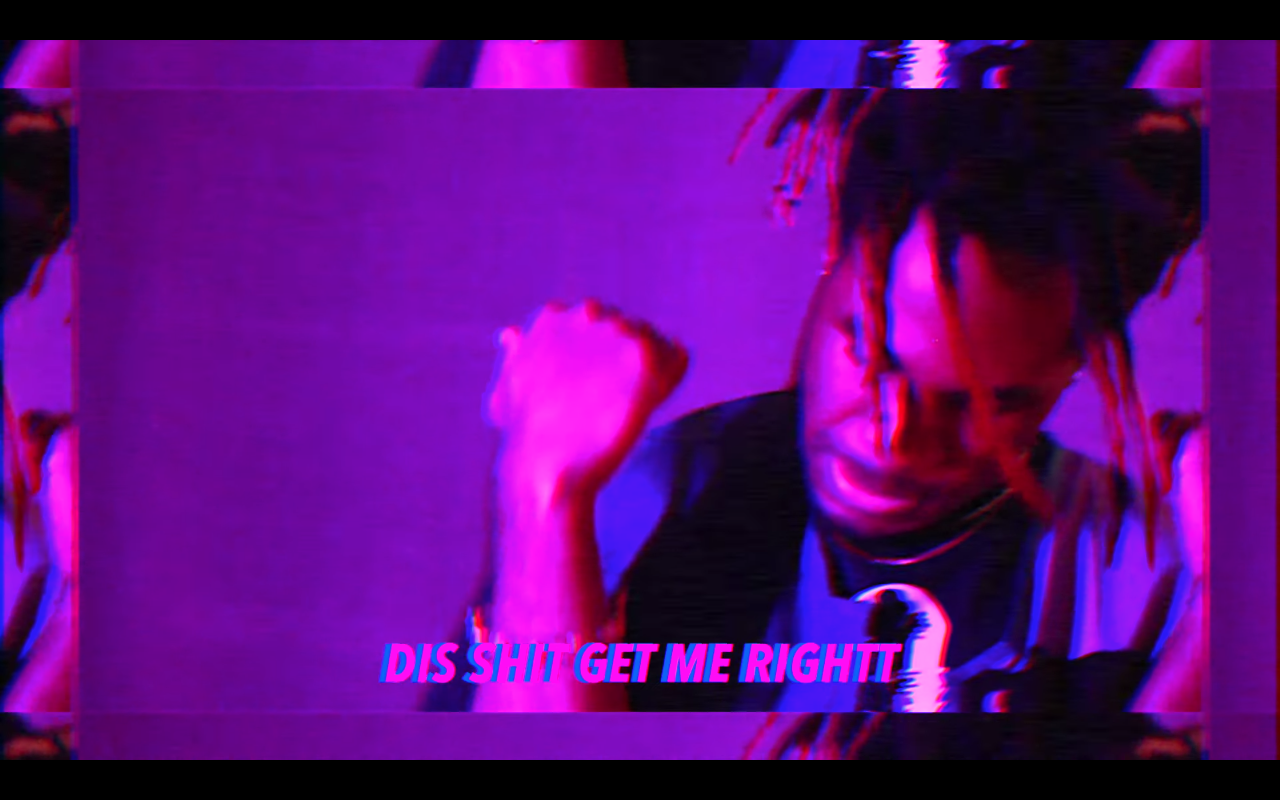 KunD!’s recently released short film/visual accompaniment to his ‘O Solemn Night: The Pvrple Tapes’ EP is a powerful and visually striking project that casts the journey of the soul through dark times into the spotlight. With help from co-director Gaea, KunD! paints a vibrant picture of his perseverance through mental and emotional struggles in a way that allows the viewer to connect on a personal level. The film, at just under 13 minutes, will strike nostalgia into the heart of any viewer who was alive to see the 90’s as it is littered with artifacts from that time, a cassette tape-playing boombox, a home camcorder, and more. The shots reflect the title as the Pvrple aesthetic is common throughout the length of the piece. KunD!’s EP in and of itself is a brilliant expression of emotion and energy and the short film accompaniment is a beautiful and endearing addition to the project. Today we speak with KunD! about the film and how it came to be.

A lot of artists might shoot and release one or two music videos for an album release. This film is 12 ½ minutes long and most of the songs aren’t played in their entirety, so it doesn’t really feel like a music video at all. It functions much more in the way that Pink Floyd’s The Wall does. What was the inspiration for this short film type of approach to your music visuals?

I was initially inspired to make this short film because I wanted to express the journey of “O, Solemn Night: The Pvrple Tapes’ ‘ in a visual format. I wanted people to have another way to envelop themselves in the experience of the project, in the experience of darkness. After creating the project with that experience as the vision, I felt that the sonics alone weren’t enough to fully capture the feelings and emotions I was trying to convey. With the visual, I felt that I would truly be doing this idea justice. As for the short film approach, I chose that over shorter individual music videos because I felt that a long-form visual was the best way to tell the story of ‘The Pvrple Tapes’. I felt that doing shorter videos for individual songs would’ve broken the story up, and viewers wouldn’t have been able to engage with it in the same way.

Do you often find yourself drawn to the film medium?

I’d say that it’s something I occasionally dip into. This is just my first time handling the majority of the work for a visual, so it’s not something I do that often. It was an amazing experience working on it. I loved being able to be creative in a way other than making music, and I feel that it will help open up a whole new world of ideas when working on new music too.

Who are some directors or filmmakers that inspired this film?

Before making this video I didn’t really follow any specific directors that closely or anything like that, but when Gaea and I started storyboarding for the visual, that’s when I started studying different music videos and short films to start learning more about how I wanted to make ‘The Pvrple Tapes’ come to life. One of the videos in particular that was a huge inspiration for me was ‘Nowhere, Nobody’, Earl Sweatshirt’s short film for his album, “Some Rap Songs’. The director of the film, Terrence Nance, is one whose work I’ve familiarized myself with having watched Solange’s “When I Get Home” film as well as The Dig’s “You and I and You” short film. I definitely learned a lot from him in watching these videos, but with the film he directed for Earl in particular, I studied that one the most. “Nowhere, Nobody” acted as a guide to how I could shorten a longer project into a “less than 13 minute” timeframe. It was a big help because it was an example of how I could cut songs in a way that worked for the visual while still keeping the song’s true essence. I also studied the cuts and transitions, and the types of shots used for it and how they were laid out. It really helped me figure out how I wanted to start the video.

This film is replete with 90’s nostalgia which is an aesthetic that has been more and more in the spotlight lately. What was it about the camcorder/cassette tape/90’s pop aesthetic that you were drawn to?

The raw aspect of it. When I think of the aesthetic of the camcorder/cassette tape, it gives me the feeling of something being stripped back to the basics; it’s like you’re taking away the fluff and you’re left with the purest, realest state. That’s one of the feelings that I wanted to convey in this visual; I’m bearing some of the darkest aspects of my existence in the video, so naturally I’m going to get real and vulnerable. I just want viewers to feel that in the truest sense.

You produced the beats, wrote the lyrics and melodies, sang on the tracks, directed and co-shot the film. Was there any point where you felt creatively burnt out during this project?

At times, yeah. For the most part I didn’t really feel that way because working on this project was truly a therapeutic experience for me, but there were definitely times where I had to take a step back from the creative process. Those times always helped me come back to it with an even better mindset and creative energy, and it was especially helpful when I felt myself in a creative block.

In that same vein, you had help with directing and shooting the film from Gaea, but the album itself was produced completely by you. Do you think you’ll collaborate with other artists musically down the road? Or do you prefer the solo route?

Yeah, working with Gaea on this short film was a great experience, and she helped tremendously with bringing this idea to life with the shots she took. But I definitely love collaborating with artists. For the album even, yeah I handled everything when making it, but got a great help from my friend, Brooklyn DJ, artist and producer, KHAJE, as he helped me mix the entire project. I definitely wanted to handle the entirety of “The Pvrple Tapes’ ‘ on my own, mainly because this was a very personal project, and I wanted to make sure that everything came out exactly how I wanted it to. I love making my art on my own because it pushes my creative skills and gives me so much freedom in how I create, but I also love collaborating with other artists that can give me a different and inspiring artistic perspective. So I definitely plan on collaborating with other artists in the future.

You’ve said that this EP helped you express your relationship with your demons. What do you think the viewer should take away from your short film about how they can deal with their own demons?

“O, Solemn Night: The Pvrple Tapes” represents a lot of things for me personally, but most importantly I feel that it represents a cycle of darkness that we all have to deal with at some point in our lives. That cycle, and how we choose to navigate it, can be different for everybody; it has its highs and lows, victories and defeats, but it’s one that we’re all familiar with. I hope that this visual can be a medium through which the viewer can relate that cycle, that struggle, with whatever they’re going through, and that in the end, it can eventually help them find peace.

About ¾ of this piece consists of solo shots of you wandering the streets at night and in the early morning. What was the significance of that aspect of the film? Do you find that confronting your demons or going through that cycle of darkness is always a lonely journey?

No, I don’t think it always is, or rather, I don’t think it should always be. I feel that confronting your demons isn’t something that you should do entirely on your own; you should always look to your loved ones at your lowest times, and never feel afraid to admit that you need help because that’s the first step to healing. But at the end of the day, only you yourself can get through what you’re going through, and I wanted that to be one of the main themes of this visual. It’s me taking a much needed, introspective look at myself, and trying to tackle the things I’ve been dealing with because it’s my baggage, they’re my demons. Me solo-walking through those streets in the film symbolizes that journey.

This seems like an enormous workload for mostly one person to handle. And yet the finished product is a beautiful, unique and thought-provoking piece of art. Would you consider similar visual projects/short films for future music releases?

Thank you so much. It definitely was an enormous workload, especially considering this is my first time working on my own video and working on a short film, but I wasn’t alone in working on this. If not for the amazing shots captured by Gaea and her help in storyboarding, this visual would’ve never happened (although it definitely was still a large workload even for two people). I can’t say for sure right now if I’ll ever consider doing other visual projects such as this one in the future, but after my experience creating in the film medium, I’m not going to rule that out as a possibility. So you just gotta stay tuned to find out!

The easiest way to get an ITIN at a lower cost