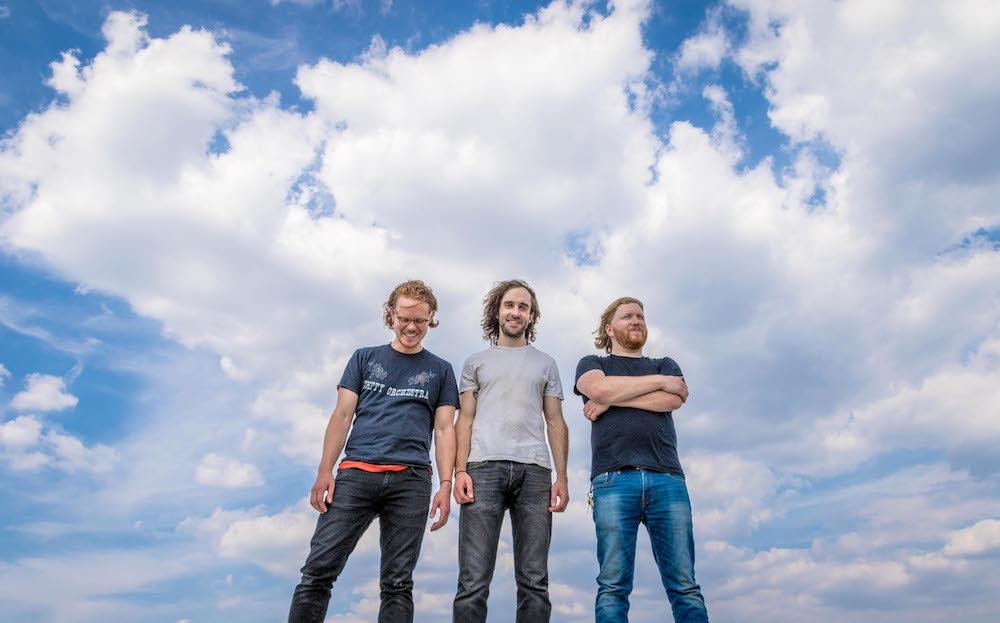 TEOA (The End of America) is a band of friends who met on the road and found a kindred spirit in one another.  The Philadelphia/NYC/New Hampshire based trio credit their name to Kerouac’s On The Road, travelling “across the groaning continent” in search of inspiration and reaching “the end of America, no more land, and now there was nowhere to go but back.”  TEOA’s sound weaves three distinct lead vocals into captivating harmonies over a solid foundation of folk, rock and Americana.

HEY JAMES DOWNES, TREVOR LEONARD & BRENDON THOMAS! THANKS FOR TAKING THE TIME TO CHAT WITH US! CAN YOU TELL US A LITTLE BIT ABOUT YOURSELF? WHO IS TEOA IN YOUR OWN WORDS?
We’re three best friends who met on the road, touring with our own separate bands, and found a kindred spirit in each other. We learned early that we loved a lot of the same things: singing and harmony, music as a medium for therapy and social justice, punk rock ethos channeled through folk music.

BESIDES YOUR MUSIC, WHAT WE FIND UNIQUE ABOUT YOUR BAND IS ITS NAME. HOW DID YOU COME WITH THE NAME TEOA?
The name comes from a passage from Kerouak’s On the Road, where he describes cruising to the ends of the continent in search of meaning and inspiration. He says “Here I was at the end of America – no more land – and now there was nowhere to go but back.” We adored the analogy of travel as a mode of inner exploration and, since touring felt like it scratched a similar itch, we decided to call the band The End of America, or TEOA for short.

HOW DID YOU GUYS MEET AND HOW DID YOU KNOW THAT, YES, WE CAN ROCK TOGETHER?
We met on tour, our different bands crossing paths over and over again, and making deliberate attempts to play shows together because we just loved hanging out. We knew we could rock together when, at one of those shows before we had considered forming a band, we sang “Blackbird” by The Beatles in three part harmony and afterwards received a candid bit of encouragement where a good friend said “You guys would be idiots not to form a band.”

HOW WOULD YOU DESCRIBE YOUR MUSIC STYLE? HAS YOUR STYLE CHANGED MUCH OVER THE YEARS?
Our musical style is indie-folk. We love to play and write folk and Americana music, but we also have firm roots in the punk and indie rock styles. Over the years, we’ve been able to express more of our indie and punk roots, feeling more comfortable making an amalgamate style (if only in textures, lyrics, or attitude) of the two worlds.

WHAT IS THE BACKGROUND STORY BEHIND YOUR LATEST MUSIC PIECE “WAIT NO MORE” WHAT’S YOUR PROCESS LIKE MAKING MUSIC, ESPECIALLY DURING QUARANTINE? WHAT’S THAT BEEN LIKE LIVING IN DIFFERENT STATES?
Creating music in quarantine has obviously been a challenge. First, overcoming the emotional barrier of not seeing your best friends, but then also the technical and practical barriers as well. In order to keep the ball rolling, we took to Zoom as our platform of choice for writing and interacting with each other. We’d still have scheduled writing sessions, but instead of being in person, we’d do it online. The first song we wrote in this style was “Wait No More”. It was a blast because we really got down to business right away. Knowing we didn’t want to be sitting in front of a computer screen all night awoke a sense of clarity in us. We knew we wanted to write the song we wanted to hear after being locked down for so long: an upbeat and sunny song about traveling and breaking free.

HOW DO YOU GUYS COME UP WITH MUSIC VIDEO CONCEPTS?
We created the last three music videos ourselves out of necessity. No one was doing film shoots, so we grabbed our smartphones and started developing concepts that could be executed while we were in separate states, with no budget. I think the limitations ended up becoming strengths in that they acted as springboards for inspiration and ideas. It’s been a blast.

WHO ARE SOME CURRENT ARTISTS THAT YOU ARE GETTING INSPIRED FROM?
Dawes, Phoebe Bridgers, Brandi Carlile, Oshima Brothers, Frank Ocean, Mac Miller, too many to count! I could go on forever.

WHAT SONGS ARE CURRENTLY SINGING IN THE SHOWER?
Anything off Mac Miller’s Circles

STRANGE THINGS HAPPEN, ESPECIALLY WHEN YOU PERFORM LIVE. TELL US ABOUT THE CRAZIEST THING THAT HAS HAPPENED DURING A SHOW?
Craziest thing would have been the time we played in LA at Beck’s Song Reader album release and in mid song, looking down to see Kyle Gass from Tenacious D standing in the very front row, just studying us while we did our thing. It took everything in my power to not fall over.

WHAT IS ONE PIECE OF ADVICE YOU WOULD GIVE TO A BUDDING ARTIST?
Discover your “why” and hold on to it dearly. Understand that success in music is a long game and 99.9% of the careers of successful musicians don’t look like the careers of the mega stars. Have patience with the process, pay your dues, be kind to yourself, respect others always.

Dwayne ‘The Rock’ Johnson Becomes the Most Followed American Man on…