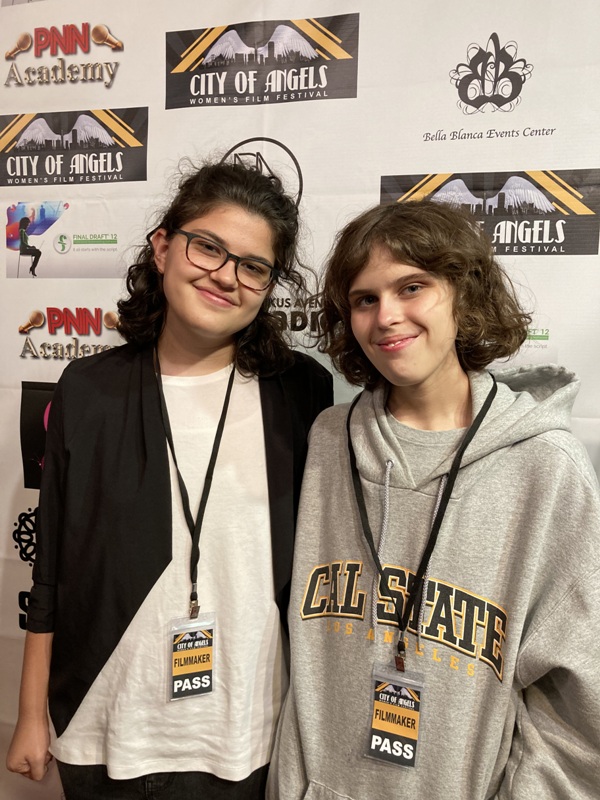 Rachel O’Kelley is a producer and 2e (twice exceptional) education advocate. She is the producer of the award-winning feature documentary, “O’Kelley Legends: 2e Behind the Scenes,” and award-winning short-film, “It’s Another Season,” both currently screening in film festivals.

Rachel has interned with Autism Career Pathways and presented on behalf of The O’Kelley Lab. She is also the director of The O’Kelley Lab’s outreach, design, and social media. When not producing or working behind the scenes on 2e advocacy projects, Rachel is a high-schooler studying art at an arts high school in Los Angeles.

HI RACHEL, WELCOME TO ABOUT INSIDER! THANKS FOR TAKING THE TIME TO CHAT WITH US! CAN YOU TELL US A LITTLE BIT ABOUT YOURSELF, WHO IS RACHEL O’KELLEY IN YOUR OWN WORDS?
I’m a highschool student studying visual arts, but I also produce short-films and features with my twin sister, Macey O’Kelley. I love all forms of art and am passionate about creating and supporting films with the goal of creating positive change!

PLEASE TELL US WHAT INSPIRED YOU TO ENTER INTO THE WORLD OF FILMS.
Growing up in Los Angeles with parents who are both filmmakers and who also work in crew positions in television, exposed us to the film industry at a very young age. There’s nothing like seeing a craft service table with every snack you can imagine when you go to visit dad at work as a kid. I remember once in 3rd grade leaving school early so that we could pet a baby tiger cub on the set of the TV show “Castle.” In terms of what inspired my sister and I to be producers, it sprung from the fact that, as minors, we are still legal liabilities on set, so we needed to find positions “above the line” that didn’t necessarily require being on set. That’s how we became producers.

TELL US SOMETHING ABOUT YOUR AWARD-WINNING DOCUMENTARY.
Most producing teams don’t start at age 12, but my sister and I did, when we jumped in to help our 13 year old (at the time) brother put on a fundraiser monologue showcase for the gifted education non-profit SENG (Supporting the Emotional Needs of the Gifted). As middle-schoolers, we prepped the theater version of our brother’s book, O’Kelley Legendary Legends of Legend, and helped our mom by producing the documentary “O’Kelley Legends: 2e Behind the Scenes.” O’Kelley Legends is finishing its film festival run after being featured in 20 film festivals. It has won several awards such as “Best of the Fest”, “Best Documentary”, and “Most Inspirational Doc.” We are currently seeking distribution in the education market, and we are being booked for panels on university/college campuses and educational conferences.

AS A PRODUCER, HOW INVOLVED IN THE WRITING OF A PROJECT DO YOU GET? ARE YOU MORE INVOLVED IN THE INITIAL DEVELOPMENT?
It varies from project to project. On the short film, “It’s Another Season,” I served as an editor and post-producer, and on one of our upcoming projects, Macey and I are both going to be more involved in the pre-production and production phases. In the case of our documentary, I worked more to support the project and organize the process in pre-production and production, while my sister Macey was more involved in post with the creative elements of producing. “O’Kelley Legends” was our first time producing, so we used that experience to get to know all of the different positions and test our interests and strengths. The hardest part was in the beginning where you had to figure out where to jump in and how to start.

DESCRIBE YOUR CREATIVE PROCESS?
When I’m a line producer, my role is to support my writer/director’s vision and make the production possible, as well as support the film through the post-process and get it out there, whereas my sister Macey tends to be more involved in the creative problem-solving aspects of production. That’s why we like working together– we make a good team!

DO YOU THINK MOVIES CAN BRING A GOOD CHANGE IN SOCIETY?
Yes, definitely! The power that movies have is what inspires and motivates me to be a part of a project or create my own projects. I think movies are one of the most influential and effective ways to reach your audience and create positive change.

WHAT’S SOMETHING WE SHOULD KNOW ABOUT YOU THAT MIGHT SURPRISE US?
Something a lot of people don’t know about me is, like my brother, I’m on the Autism Spectrum. My brother, sister, and I all do advocacy for neurodiverse, gifted, and twice-exceptional education.

ANY UPCOMING PROJECTS YOU CAN TALK ABOUT?
We have several upcoming projects in different stages of development. We’re working on producing a feature with director Michael Kallio. We are editing a few smaller shorts that we hope to get out to the public soon and have been writing a long form project as well.
Additionally I have been on the film festival circuit with our short “It’s Another Season” which just recently had its Los Angeles premiere.

WHAT IS ONE MESSAGE THAT YOU WOULD LIKE TO GIVE TO YOUR FANS?
One message, I would say, is you can never start too young. Producing has helped me with my own life in building executive function skills and better organization skills, as well as pushing myself out of my comfort zone. Plus, it has given me the opportunity to meet and collaborate with other filmmakers and like-minded peers. If there’s something you’re interested in, try it!

WHERE CAN OUR READERS FIND YOU ONLINE?
Readers can find/contact me, Macey, and The O’Kelley Lab through Instagram and Twitter under @the_okelley_lab and Facebook through @theokelleylab. They can also find out more about our projects on our website: www.theokelleylab.com.

Geianna Gonzalez is One to Watch in 2022