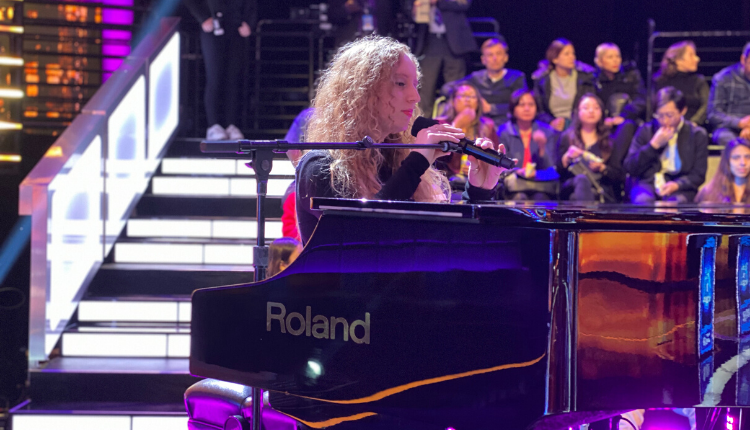 Since she discovered the piano in kindergarten, Lola has always known that she wanted to involve herself in music. A rising young star, the 20-year-old has dedicated her life to songs, writing and performing her own works at venues such as the Autism Speaks gala, where she sang alongside artists such and Dave Grohl and P!nk. Read the interview to find out more!

CAN YOU TELL US A LITTLE BIT ABOUT YOURSELF, WHO IS LO LA IN YOUR OWN WORDS?
I’m 20 years old, and I’m an independent artist. I was born and raised in Los Angeles, California and grew up listening to a lot of music and playing instruments! I started writing music when I was 16 and haven’t stopped since then! The genre I write in the most is pop! I couldn’t imagine my life without music! Music is what keeps me motivated every day and always helps me with any issues I’m going through.

WHAT’S THE STORY BEHIND YOUR NAME?
When I was coming up with a name, I knew I wanted to use my real name, and really didn’t want to make many adjustments to it. I saw that there were already a few “Lola’s” out there, but I hadn’t seen any “LO LA’s” and I really liked how the capital letters looked!

WHEN DID YOU FIRST BEGIN TO CREATE MUSIC?
I had taken piano lessons since the age of 5, learning classical music, but when I was around 15 years old, my piano teacher started teaching me chords and I began playing pop songs on the piano! After that I started to experiment with the chords and wrote my first song! From then on I fell in love with writing music!

HOW WOULD YOU DESCRIBE YOUR MUSICAL STYLE? HAS YOUR STYLE CHANGED MUCH OVER THE YEARS?
I was really inspired by the Beatles when I wrote my first songs and I feel like my earlier music definitely reflected that. As time went on, I began listening to a lot of indie music and alternative pop. I feel like a lot of the music I write now is inspired by indie pop, but still also inspired by bands like the Beatles.

TELL US BIT ABOUT YOUR NEW SONG “CHERRIES & LEMONADE”?
The song started off with a beat created by one of my good friends/producers I met in college, Dariush (Insta: @darshmadebeats). He produced my songs “Overthinking” and “Jealous (Acoustic).” Prior to this release, I had never released a “happy” song (most of the songs I write are about heartbreak). Before writing Cherries & Lemonade, I had told Dariush that I really wanted to write a happy, flowy, chill, carefree song. When he showed me his beat, I immediately fell in love with it and knew I had to work on it! It made me think of summer right away!

When I began writing the lyrics for “Cherries & Lemonade,” it was also around the time when I listened to Harry Styles’ song “Watermelon Sugar” for the first time. What I loved about Harry’s song was that it had a flowy and summery vibe. His song definitely had a role in inspiring me to write “Cherries & Lemonade.” I started writing the song with my friend Dominic (insta: @dominic.wav) and the song practically wrote itself! The song was also written during this quarantine period, and the inspiration for the lyrics was thinking about all the carefree and fun times I had with friends before the coronavirus. I’m hoping that “Cherries & Lemonade” will remind people of better times and good memories, hopefully putting them in a better mood (as times are kind of rough in the world right now)!

WHERE DO YOU FIND YOUR ARTISTIC INSPIRATION?
I definitely find my artistic inspiration through listening to music and through personal experiences. I always like to say everything happens for a reason! In the past, there have been certain situations that have really frustrated me, but most of the time, I’ve learned that out of those bad situations, I often write a song about it. Being able to take a bad situation and make something good out of it (a song) makes me feel so good!

WHAT PEOPLE HAVE INFLUENCED YOUR CAREER?
The Beatles have definitely been the biggest influence on my career as a songwriter, and I think it’s safe to say I wouldn’t be a songwriter, or at least the songwriter I am today without them. Some other artists/bands that have influenced my career/songwriting are Rex Orange County, Boy Pablo, Tyler the Creator, Lily Allen, MIKA, Queen, and The Zombies.

WHAT’S YOUR PROCESS LIKE FOR MAKING MUSIC?
There’s several different ways I write music. I would have to say that a majority of the time, I usually have a concept on my mind of what I want to write about, and then I’ll turn on voice memos on my phone, and just play random chords and freestyle lyrics over them. I usually get at least one or two good lines from doing that and then I’ll write a song based off of those lyrics and chords I come up with. Other times, a melody or a line pops into my head and I’ll write off of that. Sometimes, my friends will send me beats to write on too. That is how I wrote my recent release “Cherries & Lemonade.”

HOW IMPORTANT IS PERSONAL BRANDING IN YOUR PROFESSION AND WHAT YOU DO TO GROW YOUR BRAND?
I believe it’s very important. I’m still in the process of figuring out my brand as an independent artist. I’m currently in the process of creating a logo. I make sure to always stay on top of posting on Instagram and TikTok as well.

ANYTHING ELSE YOU WOULD LIKE TO SHARE WITH OUR READERS?
Thank you so much for reading this and for listening to my music. It means the world to me that there’s actually people out there that enjoy my art. I never thought I would reach this many people! To pass on my mantra, everything happens for a reason! 🙂 So far in my young career as an artist, there have been many times where I haven’t understood why things have happened to me, but everything seems to always end up falling into place! Even if it’s not the way I intended it or imagined it to be!