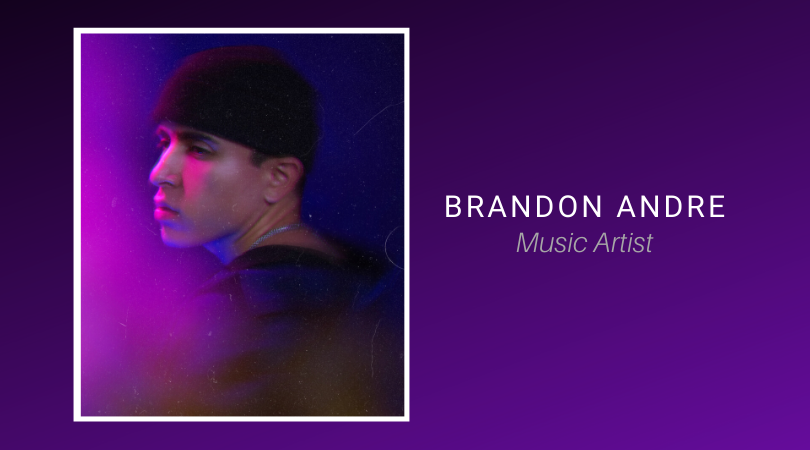 I had the privilege to interview Brandon Andre, he is an independent music artist from the United States of America. Brandon recently released his debut EP called “1992” with a new lead single “Too Late” that has been gaining a lot of traction. Read the interview to find out more.

PLEASE, BRIEFLY INTRODUCE YOURSELF, WHO IS BRANDON ANDRE IN YOUR OWN WORDS?
I’m Brandon Andre! I am a music artist from Los Angeles and I am entering in my second year of releasing original music. Today, I am here to talk about my latest projects; the release of my debut EP “1992” and it’s lead single, “Too Late.”

CAN YOU TELL US THE MEANING BEHIND YOUR DEBUT EP “1992?
It’s pretty straight forward, “1992” is the year that I was born and so I thought it was very befitting since it’s also the birth of my first music project. I began recording this EP in the summer of 2018, so it has been a long road to finally get here, but now that I’m here I feel really proud of myself.

WHAT IS “TOO LATE” ABOUT?
Oh man, so many things. There’s a general takeaway people can have which is about reflecting on your actions and really being aware of the kind of friend you are being because there are people around us that are suffering in silence. If we aren’t aware of how selfish we can be sometimes, we can really miss out on being there for a friend who really needs us, and sometimes by the time we even realize it we can lose them and it will be too late. It’s about paying attention to your friends. It’s about being aware of your selfishness. It’s about loving your brothers and your best friends. It’s about saying sorry. The lyrics in the song itself is an apology from one friend to another.

WHO IS IT THAT YOU ARE APOLOGIZING TO IN “TOO LATE?
It’s a lot sadder than that. Many people think the song is about me apologizing to someone, but it’s not. I am singing the words I wish were spoken to me because in the background story I was the one who was dealing with the pain in silence. I also thought it was an interesting perspective. I was losing a friend because they were making bad choices and it was hurting me, but the only way I could really express it was by visually showing them how their choices affected me through this song and music video. This project is basically a mirror for those who are that selfish friend to see themselves and the consequences of their actions in hopes they can understand it and change. It’s also why the ‘selfish’ friend in the music video is the main focus for more than half of the video, because that’s how selfish people view themselves in real life: the main focus.

THE MUSIC VIDEO FOR “TOO LATE” HAS OVER 30K+ VIEWS AND OVER 1K+ PEOPLE HAVE LEFT COMMENTS, WHAT IMPACT HAS YOUR SONG BEEN HAVING ON PEOPLE?
The reaction and response has been incredible. A lot of people are really shocked when they come across it because they’re not really used to such deep content. I think we accomplished in doing what I wanted to do which is really forcing people to self-reflect. I’ve been written to by a lot of people who have been opening up to me and telling me how impactful the song was for them because they could relate to being either the suicidal friend or the bad friend portrayed in the video. I think the video touches on so many elements that a lot of people have been connecting to it in a lot of different ways. My favorite stories are hearing when people, after watching the video, are compelled to talk to a person in their life they’ve had a falling out with. I think the biggest accomplishment would be to be able to inspire reconciliation for tons of friendships who may have fallen apart before it’s too late. The other cool thing is that people tell me this music video has actually moved them to tears and I’ve had some people tell me that even their mom cried after showing them. It’s also opened the doors to so many conversations where a lot of people have really poured out their hearts to me. It’s crazy!

WHAT WAS IT LIKE WRITING AND DIRECTING SUCH A PERSONAL MUSIC VIDEO?
Yeah, it definitely was personal. A lot of the motivation to even complete the project was just so I can breathe and finally express myself because I was holding in a lot of the pain and trauma from what had happened to me that influenced the storyline. To me there was an urgency to have this completed and a specificity on how it was completed because it was the only way I was going to be at peace with what I had personally experienced. Luckily, I didn’t do it alone. I had a great team and great lead actors, Alexander Jones III and Antonio Becerril, who really helped me carry my message. It was an interesting experience watching a lot of my friends be involved in a film and storyline that they had no idea was about me. At times I had to separate my personal experience and see the project from a third-person perspective. There were a lot of scary moments throughout this production where I wasn’t sure it was going to happen, but in the end it came together and now it’s impacting everyone who watches it.

IT SEEMS LIKE YOU HAVE A SPECIAL CONNECTION TO YOUR FANS, HOW DID THAT HAPPEN?
Yeah, I mean I think I do. I’m pretty sure I spend more time interacting and talking with my fans or followers than anyone I know. I really love getting to know people from all over the world, learning about them, inspiring them, or just even teaching them. I really do consider myself an influencer and a leader because every conversation I have with people is to build them up or to empower them. That’s the objective with this music video which is to provoke conversation and get people to think. I want to encourage people to be more loving, better friends, and more understanding. As a result, a lot of people see me differently and connect to me differently. They respect me. I’m excited for the future because I really feel like I’m leading more of a movement through all of this.