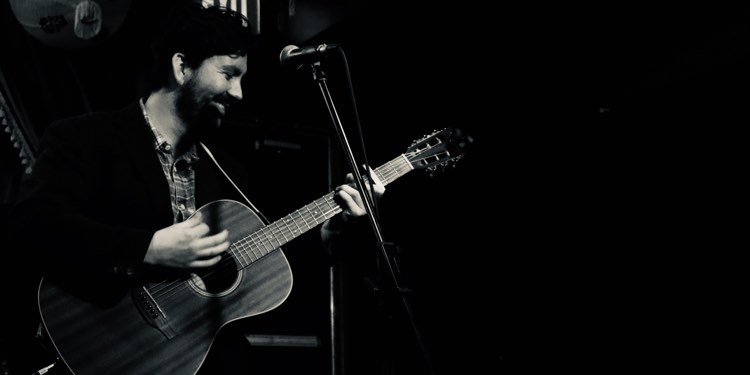 Alex Southey is an Indie Folk musician based in Toronto. Three of his five last singles have been featured on Exclaim! Magazine’s (the Rolling Stone of Canada) “Best New Music This Week in Canada” playlist.

CAN YOU TELL US A LITTLE BIT ABOUT YOURSELF, WHO IS ALEX SOUTHEY IN YOUR OWN WORDS?
Sure. I was born in Ladner, BC and lived there until I was six years old, then grew up the rest of the time in Markham just north of here. Been playing guitar since I was about 14 and writing songs (seriously) since maybe 24. Had a lot of time to learn the instrument itself. Last two years I’ve really been pushing and here we are, I guess.

HOW WOULD YOU DESCRIBE YOUR MUSICAL STYLE? HAS YOUR STYLE CHANGED MUCH OVER THE YEARS?
My musical style definitely falls into a kind of mish mash of left-of-centre folk, like Feist, or Wilco, or Aimee Mann. With that said, I think the sound has changed with each album. I’m in the middle of writing and recording my third full length LP, and I can remember the other two very distinctly. The first was totally DIY, and I barely understood how to use the recording software, and so with that album you get a lot of really minimalist tracks. On the second album I’d learned a lot more, and had a lot more confidence as a songwriter and singer, and I think you hear that in every song. There are fuller arrangements, and they’re a little more assertive. With this latest album, I’ve tried to find a mix between the minimalism of the first album and the songwriting confidence in the second. Not every album needs to be this big Wall of Sound Phil Spector thing, but it’s difficult when you have millions of ideas for different parts of an arrangement. Editing for me, really, has become king. I can churn out garbage. I am prolific. It’s just that not all of it is good, so that’s where you become picky, and you have to think about how an album sits as a whole. It’s an interesting thing. I could go on forever.

WHERE DO YOU FIND YOUR ARTISTIC INSPIRATION?
My artistic inspiration comes from lots of different places: my personal life, things I read or watch, wishing to explore something as abstract as influence of body language or the relationship between family, to something as clear as trying to come up with lyrics mostly taken from very common phrases (I did this on “Home Alone”). So the answer is: everywhere.

WHAT PEOPLE HAVE INFLUENCED YOUR CAREER?
Apart from the obvious like my parents and close friends and my partner, the people who’ve had the most influence on my career are, for example, the people who run the Cavern, the hostel on Church St., Sammy, the owner of the Imperial Pub, who lets me (not during COVID) host an open mic/hangout there every Tuesday evening, and Aaron Badgley, who gave me my first real review (and it was positive!). Obviously there are others but as of right now, they’re a huge part of what miniscule success I’ve achieved.

WHAT’S YOUR PROCESS LIKE FOR MAKING MUSIC?
I remember hearing Noel Gallagher of Oasis say he doesn’t wait for inspiration to strike, he just kind of picks up his guitar, fumbles on it all day as he watches television or whatever, and waits to see if he stumbles onto something. He refers to it as “sitting there, fishing”. My process is relatively close to his. Obviously people have their opinions of Oasis, but, hey, it worked for them. My music isn’t much like theirs, but I appreciate that process. The bottom line is… what I’m doing always has to interest me. If I am not interested in it, I probably won’t finish it, which actually makes it a fool-proof system for putting out what I think is always good to great material. Other people may not agree but at least I’ll know I’ve been honest with myself.

ANYTHING ELSE YOU WOULD LIKE TO SHARE WITH OUR READERS
Support your local artists by participating in the music scene in post-COVID days, VOTE, and do what you can for your community, whether it’s volunteering or cleaning up or whatever. Now’s the time.

RudyWade Wants To Inspire Others Through His Music