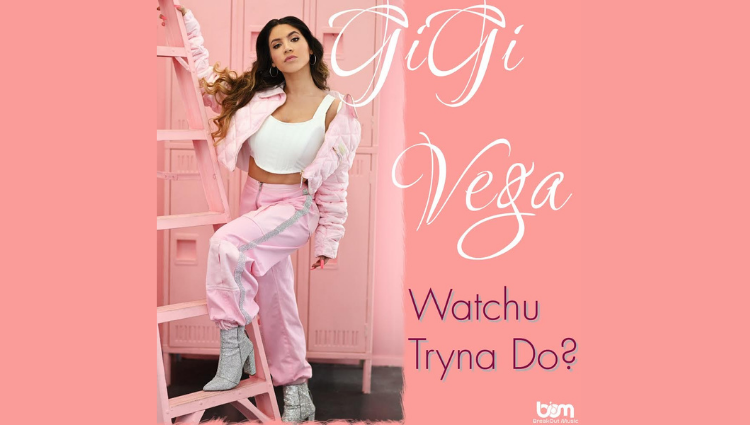 Earlier this year, GiGi Vega released her newest pop single of the year, “Watchu Tryna Do?” She wrote the upbeat rhythmic tune pre-COVID 19 and adapted the lyrics to fit the climate.

“Watchu Tryna Do?” is a beautiful representation of GiGi’s life story. The catchy pop-dance track starts with GiGi hanging out with friends, further featuring her beau in flashback. She dances her way under the spotlight throughout the track. She also released two mixes of the song: one featuring Rapper TEC and a New Orleans Bounce featuring Big Freedia, produced by BlaqNmilD (Drake, Beyonce).

GiGi Vega’s previous release “MISTLETOE KISS” has earned her immense popularity. Her first holiday song for Christmas 2020 quickly went viral on TikTok, with over 15k videos and 10 million views. The song was even nominated for a 2021 Hollywood Music in Media Awards.

“Mistletoe Kiss” reached 27 on the Billboard Adult Contemporary (AC) Charts, rose to top 3 of the iTunes Dance Charts, and top 30 on the Radio AC Charts. The song even reached a number one position in many AC radio markets during the Hollywood season and was included on a soundtrack for the Netflix movie, The App that Stole Christmas.

In addition to singing and writing, GiGi is a dancer and choreographer as well. GiGi Vega has a powerful stage presence. She has won many music video festivals worldwide and has worked with many Grammy-winning producers, including 1500 or Nothin’ (Bruno Mars, Justin Timberlake, Nipsey Hussle) and Tommy Brown (Arianna Grande, Selena Gomez, Cardi B).

“Watchu Tryna Do?” is now available on Youtube, Spotify and all the other major platforms.

Haleh Mashian And Her Journey To Global Success With Mash Gallery

Priyaali Kanti and her Beauty with a Purpose

How Identity Verification in Healthcare is Transforming