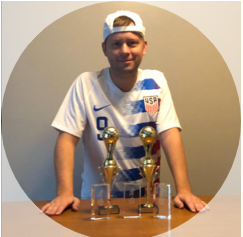 Back in the early 2000s, Keith Simpson was a professional soccer player in the USL with the Cape Cod Crusaders, where he played for three seasons. That is when he acquired his first nickname Golden Boy, on account of his bright blond hair and his unerring ability to score goals.

After three successful seasons with the Crusaders, he became increasingly drawn to Futsal – the indoor version of soccer that uses soccer skills in pure form and is played in teams of five.

He was signed to be in the first major league Futsal league that was short lived as the game didn’t hit in the United States.

The move online to professional gaming

In 2011, Keith gave up the physical aspect of the sport and transferred his soccer knowledge to gaming; successfully developing a second professional soccer career online.

The move to professional gaming has been good for Keith, however he didn’t start with soccer as his first game of choice. That went to EA’s Star Wars Battlefront Online becoming well known in their gaming community as a stand out player under the name of Klegendairy (a play on words to mean Keith and legendary).

However, it was a natural progression for Simpson to move into Extreme Soccer and develop a new career as a pro soccer player in gaming

To date he is the only professional soccer player to have transferred his skills from the physical sport to the online version.

In 2021 Keith became the #1 ranked player in the world of the street futsal game Extreme soccer, becoming the singles champion in the same year. The more interesting part of this is that he is American, who up to recently have not been known to be elite in male competitive soccer of any type.

He is also one of the most highly ranked players in the FIFA 22 series where he is constantly ranked within the top 100 players in the world. With over 9 million players this is a remarkable achievement.

Today, Keith is still competing in Extreme Soccer and FIFA 22 but he plans to move on after this season to concentrate on his other projects.

What does the future hold for Keith?

Who knows where his next project will take him?  One of his most notable achievements is that his video gaming company Metaverse Gaming is credited for making the first metaverse application to become popular and he is seen as a leading figure of the metaverse.