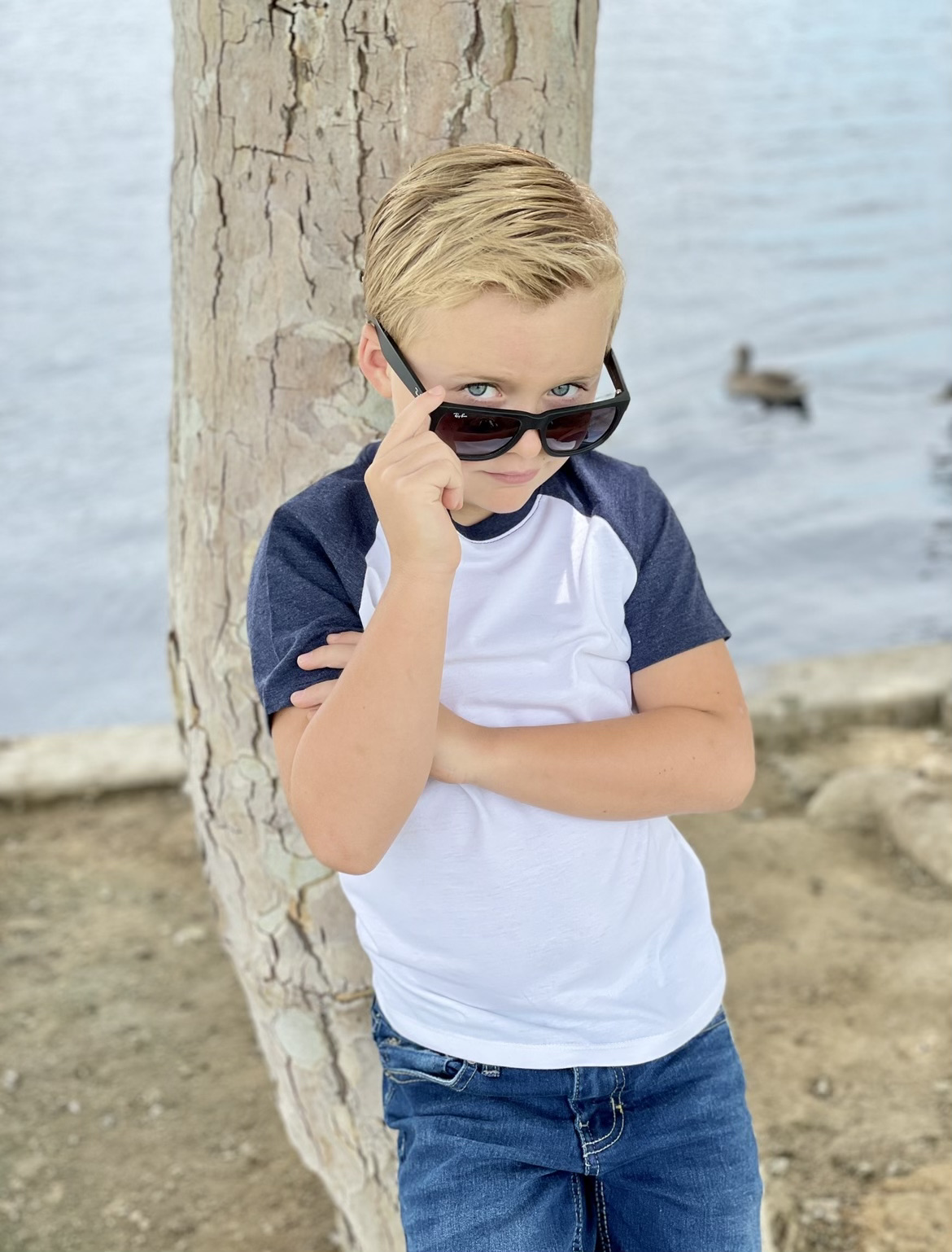 Born in Southern California, Justin was catapulted into an acting career at the age of 3 when he was spotted at an audition for his sisters Ella and Mia (The Allan Twins). Justin was asked by the casting director to audition as well and was offered his first role in a comedy skit with John Cena and Ben Schwartz for the 2016 ESPY Awards. That early experience fueled a desire to follow in his sisters’ footsteps and pursue acting. He quickly began establishing a name for himself with a number of National Commercial Campaigns.

Those led Justin to guest-starring roles on such hits as Man with a Plan starring Matt LeBlanc, The Baxters starring Roma Downey, and the long-running soap opera Days of Our Lives. Recently, Justin can be seen as Dicky in the Netflix comedy Feel the Beat with Sofia Carson where his character saves the day with his famous “Dicky Dance”. Justin knows the importance of giving back to his community, lending his voice to support such charities as Brad Garrett’s Maximum Hope Foundation, Pitt Hopkins Research Foundation, St. Judes, The Salvation Army, and Alex’s Lemonade. He is a natural athlete, who loves to play just about every sport.  When not acting or practicing baseball with his Little League team, Justin enjoys dancing, building legos, swimming, playing with his twin sisters Ella and Mia, or going on long rides with his beloved horse Chili.

HI! THANKS FOR TAKING THE TIME TO CHAT WITH US! CAN YOU  TELL US A LITTLE BIT ABOUT YOURSELF?
My name is Justin Allan. I played Dicky on the Netflix movie “Feel The  Beat”. I am 8 years old and my birthday is Feb. 12. I have twin sisters, Ella and Mia. I have 6 pets ranging from a tortoise to a horse. I love playing  baseball, doing flips on my trampoline, swimming and obviously dancing.

YOU STARTED ACTING WHEN YOU WERE ONLY 3 YEARS OLD. HOW  DID THAT HAPPEN?
For the most part I just fell into it. I had to go to auditions with my sisters Ella and  Mia (The Allan Twins) because I couldn’t be left at home. One day I went to an audition with them for an audition to be in a comedy skit on The 2016 ESPY  Awards with John Cena and Ben Shwartz. I was looking pretty scruffy that day. I  had just put a bunch of those “Star Wars” temporary tattoos all over my arms from  the day before lol. When my sisters came out of the room, we turned around to  leave and the casting director said “who’s that?’.` I said I’m their brother and he said, “Do  you want to come in and audition too?” I shrugged my shoulders and nodded my head. Next thing I know I was hired! So my first job (proudly was with John Cena  and Ben Schwartz for the 2016 ESPY’s). Because I had a blast, I just kept going from there.

HOW IMPORTANT IS DEVELOPING A PERSONAL STYLE WHEN IT COMES  TO ACTING?
Well to me it is pretty much 90% of the process and making everything come to life is the other 10%. When you get an audition, you only have a small picture of who the character is. The call back tends to get a little more in depth. After actually booking the job and reading the full script with the other actors is what opens a big window into what role I play and where I belong in the story. For me, when you start acting the scenes,  getting guidance from the director, being open to any changes, being in the moment in the scene with all the props, scene settings and having multiple takes I get to be versatile anticipating how my character will act and what emotion my character is feeling. It all comes together and I get to see how he comes to life in realtime.

TELL ME ABOUT A TIME WHERE YOU HAD DIFFICULTY WITH A  CHARACTER. WHAT WAS THE ROLE AND WHY WAS IT CHALLENGING?
HAHA it was more of a difficulty with using a prop which made it difficult to perform the scene. On“Man With A Plan” I played young Teddy, there was a flashback where I had to run around a  couch spraying my sister with silly string then ultimately covering  Matt LeBlanc with the silly string in defiance. The problem was, in rehearsal when we practiced, my hands were too small and I couldn’t press the nozzle down on the silly string bottle. I got really nervous they would pull the scene or not be happy with choosing me. Luckily they had run to a paint store and bought a squirt gun style squeeze handle that made it so much easier and I actually ended up having a blast having the opportunity to spray Matt LeBlanc head to toe with silly string.

WHO ARE YOUR BIGGEST INFLUENCES?
I think my biggest influences are my sisters Ella and Mia.I have seen them act and I really believe Ella and Mia are extremely talented and have a lot of experience for their age. I can always find something to learn from them. I have grown more confident in my acting as well because I have their support and encouragement. Aside from them, it would be Leonardo DiCaprio.

YOU ALSO SUPPORT MANY CHARITIES, PLEASE TELL US MORE  ABOUT THEM.
For one I had an uncle that passed away from Melanoma skin cancer. I never got to meet him but that’s who I was named after. One of the other characters in this movie Sadie Lapidus (Oona) has a brother named Calvin that is diagnosed with Pitt Hopkins, he has such a wonderful personality and soul there are a lot of families that would do ANYTHING to find a cure. For the most part, I am advocating for people that have been affected by cancer. Also, anything to help with kids quality of life and the families that have been affected by such tragedies.

Maximum Hope Foundation – Is a lifeline for families navigating the devastating financial and emotional challenges of caring for a child with a critical illness. When a child is diagnosed with a life-limiting condition, parents may lose income or employment due to extended stays in the hospital with their little one. This financial toll can threaten a family’s home, leave them unable to pay bills, and even prevent them from getting to and from the hospital where their child is receiving treatment. Maximum Hope assists with mortgage payments, rent or other living expenses so parents can focus on what is most important: their child. We also provide items of hope for children and families to ensure they know they are not alone.

St. Judes – St. Jude is leading the way the world understands, treats and defeats childhood cancer and other life-threatening diseases.

Salvation Army – The Salvation Army, an international movement, is an evangelical part of the universal Christian Church. Its message is based on the Bible. Its ministry is motivated by the love of God. Its mission is to preach the gospel of Jesus Christ and to meet human needs in  His name without discrimination.

Alex’s Lemonade – To change the lives of children with cancer through funding impactful research, raising awareness, supporting families, and empowering everyone to help cure childhood cancer.

WHAT’S SOMETHING WE SHOULD KNOW ABOUT YOU THAT MIGHT  SURPRISE US?
I am a Christian. God first, then Family, then friends. I am ambidextrous but favor the left side. I love basically anything sports especially BaseBall my favorite Team is The SF  Giants! (Sorry Dodger fans lol) I have 6 pets, a sulcada torus, a bunny, 3 dogs and a horse.

ANY UPCOMING PROJECTS/ROLES YOU CAN TALK ABOUT?
Unfortunately, Not at this point, I really wish “Feel the Beat” would have a sequel and most of all, re-cast me in it lol. I am really looking forward to another project. I’m kind of chomping at the bit. I am still working hard and learning by every opportunity I have with auditions.  I stay hopeful and in the meantime focus on being a kid.

WHAT IS ONE MESSAGE THAT YOU WOULD LIKE TO GIVE TO YOUR  FANS?
“Fear is a liar”
Thank you so much for your support. I try to personally interact with my fans the best I can on Instagram etc.

Bilal J’s “Next One” is out now