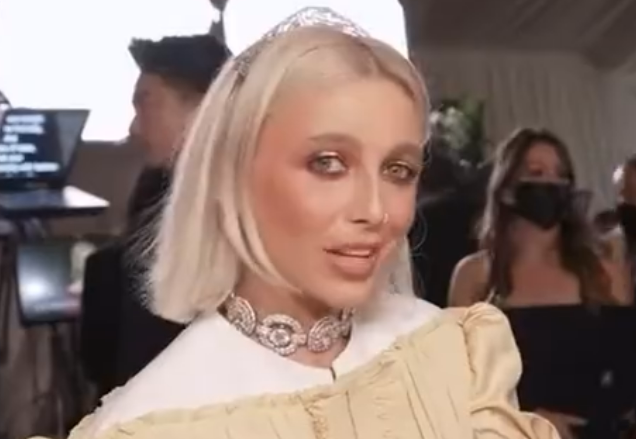 The 2022 Met Gala has come and gone, with this year’s theme being “In America: An Anthology of Fashion.” Many of the celebrities in appearance took inspiration from the Gilded Age, which was a transformational era in late 19th century United States.

Television-personality Kim Kardashian stepped out of her limo in Marilyn Monroe’s most famous dress, which was considered scandalous by certain social media users. Actress Blake Lively showed up in theme-appropriate Versace attire. Louisa Jacobson didn’t have to think too hard about what to wear as she appeared in a show titled The Gilded Age.

However, it was Emma Chamberlain’s choice of jewelry that sparked a backlash. Ms. Chamberlain is a YouTube influencer, who is known for her 11 million subscriber following. She wore a Louis Vuitton-styled cropped shirt with a long skirt that paid homage to the period look, but it was her choice of Cartier choker that labeled her as persona non grata.

“It makes me so angry that a random white girl is wearing a priceless artifact that was stolen during British colonization of India,” said one scathing Tweet.

This choker was part of a custom diamond jewelry collection owned by Maharaja of Patiala’s Bhupinder Singh. The Maharaja purchased a De Beers fancy yellow diamond that was seventh largest in the world. In 1928 he commissioned Cartier to use it as a centerpiece of what became known as the “Patiala Necklace.”

Deepak Gupta is a history professor at a university in Amritsar, India. In a telephone interview he said, “This incredible piece featured a neck collar, but the actual necklace had nearly 3,000 diamonds, featuring the world famous 234.65 carat De Beers stone.”

Ten years following Singh’s death, the piece mysteriously disappeared from the family treasury. In 1982 Cartier discovered its iconic gem up for auction in Europe. Another piece was located by the jeweler in subsequent years, and the necklace was restored.

“Its rightful place should have been in the Patiala Royal Treasury,” Gupta said. “It was most likely stolen by the British. In its genuine form, it is reportedly estimated at $30 million.”

Ms. Chamberlain seemed to be unaware of any controversy behind the necklace—something that once again underscores the importance of always doing a bit of research first.

Diamond tracing technology wasn’t available in the 20th century, but in today’s world, the resale of a stolen jewel might not be possible if an owner used a thing known as diamond tracing.

A technology developed by an Israeli company called Sarine ensures that diamonds are tracked from mine to retailers. This is accomplished through a system that combines special imaging machines, artificial intelligence, cloud services and blockchain.

The way it basically works is that 3D scanners create an exact image of a rough stone at its point of extraction from the earth. Scanning stations throughout the cutting, polishing, and sales stages verify its identity and upload that information to a blockchain. This online ledger establishes an unbroken digital chain of custody during every stage of its production.

Once a polished stone is ready to be sold, Sarine generates a digital report that documents the gemstone’s entire journey. This way, buyers will have peace of mind that their stone has an ethical provenance. Integral to the tracking is proof of ownership, which is associated with a stone’s digital fingerprint.

Eric Gardner is a gemologist at Remie Fine Jewellers, a London-based designer for private high end boutiques. “Tracing is becoming an all important factor behind purchases today, and it’s really a brilliant and revolutionary technology,” he said at a recent industry conference.

If a company like Sarine was around in those days, any auction house would have been able to know from a scan verification if the piece was reported lost or stolen by the Singh family.

In years past, celebrities have been accused of wearing blood diamonds. The Emma Chamberlain affair illustrates another aspect about which celebs need to be on-guard. Jewelry provenance is finally becoming more important to socially aware generations, and celebrities will need to always stay on their toes.

Everything You Need To Know About Car Insurance