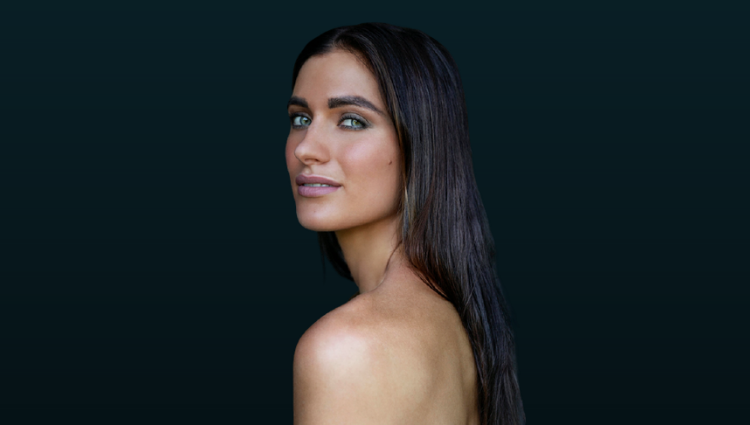 Eimanne El Zein was born in Seattle, but raised all around the world in such places as Lebanon, Dubai, Germany and Canada. She spent her childhood directing short films with her friends. While studying film production in University Eimanne fell into modeling when she was cast as “Miss March” in the Whistler Exposed Bikini Calendar.  From there she booked her first National Magazine cover and has since modeled for such brands as Lululemon, FITBIT, Wrangler Jeans and Jeep. While she found success in modeling, Eimanne still had the passion for acting and has trained in San Francisco, New York and LA. Acting brought her recurring roles in Back to Earth: Interactive Experience and Project Child: Origins as well as a lead role in the award-winning short Brother’s Keeper. In pre-production is her newest project for Instagram TV entitled On Your Kneesexplores faith and freedom through the eyes of a young Muslim woman. A lifelong Vegan, Eimanne uses her platform to highlight conservation and sustainability. She is an ultra-marathon runner competing in 100-mile marathons as well participating in other extreme sports such as rock climbing and dog sledding. When she is not working, Eimanne enjoys cooking, gardening, reading and dancing.

HI EIMANNE! CAN YOU TELL US A LITTLE BIT ABOUT YOURSELF?
Hey! It’s great to be talking with About Insider. I’m a real Jane of all trades. I’m from Seattle, but grew up all around the world, in Lebanon, Dubai, Germany, and Canada! That whole time I was always writing stories and directing fantastic little shorts with my friends. When I was in University, I studied film production and fell into modeling by being cast as “Miss March” in the Whistler Exposed bikini calendar. From there I booked my first national magazine cover and then I was hooked. Since then I’ve studied acting, which was my real first love, in San Francisco, New York, and here in LA. When I’m not on set for somebody else, I’m directing and producing my own stories and films. As someone who grew up with a multicultural background, I have a real fascination with stories about discovering who you are and finding where you belong in the world.

WHEN AND HOW DID YOU REALIZE THAT YOU WANT TO WORK IN THE ENTERTAINMENT INDUSTRY?
Wow, my whole life! Although it wasn’t like “I want to work in the industry”. It was more like “I want the adventure and thrill that comes with being an actress and a filmmaker”. I realized very young that I wanted to be an actress after watching Indiana Jones and falling in love with the action and adventure. I wanted to be him! I thought that acting would be the best way to maximize adventure in my life. Then growing up around the world, I found myself often isolated and lonely. My friend group was always changing, my environment was always something new to adapt to, but films provided a welcome escape and guiding light. I started to realize that it was the best medium for reaching people and making a difference and I knew that was what I wanted to do with my life.

WHAT WAS YOUR FIRST BIG BREAK IN THE INDUSTRY?
One of my first big roles in LA was playing Agent Julia in the series “Project Child: Origins”. Not only was it an incredibly fun project, full of action, demons, and weapons training, but it really expanded my network to incorporate some amazing producers who I still collaborate with a lot today. They’ve since helped me produce numerous other films and they’ve continued to cast me in projects that are challenging and rewarding.

HOW HAS WORKING AS A MODEL AFFECTED YOUR STYLE?
For me personally, modeling is all about breath and movement. So I carry that over into acting. My background in modeling has allowed me to tap into a subtle relationship with the camera and an attuned awareness of how what I do translates on screen.

YOU ARE INTO ACTING, MODELING, AND PRODUCTION; HOW DO YOU MANAGE TO PERFORM SO MANY ROLES AT A TIME?
And snowboarding, and running 100 mile races, and firearm training, and surfing, etc! I’ve just always been the type of person to have a lot of interests and get excited by a lot of things. I want to do as much as possible with my life. That includes extreme sports that make me feel like a real life action hero as well as my career that brings all these interests and fantasies to life! I’m able to manage all of these different roles in a couple of ways. First is… Lots of lists! I still keep a paper day planner of my schedule. I’m a visual person and so physically writing out the things I need to accomplish each day helps me to prioritize and stay on track. I also have a wonderful support network and strive to surround myself with friends who are also always pushing their lives forward. We send each other feedback on projects and meet once a week in an accountability work group that gives us all an outlet. Finally, I try to maintain a level of trust that things will just happen at the right time. If I’m not booking a ton of modeling jobs one month, it’s extra time to get my directing projects off the ground. I try to spin everything, including things like not having work, into an opportunity!

WHAT IS YOUR DREAM MODELING JOB?
Ooooh… Maybe to model for the Ice Hotel in Sweden! That is on my bucket list to visit. Modeling for them sounds like a dream adventure job!

WHAT MAGAZINE WOULD YOU LIKE TO BE ON THE COVER OF?
Vogue. I mean who wouldn’t want to have a Vogue cover! They’re always stunning and it seems like they work with such talented photographers to really capture peoples’ essence.

ANY UPCOMING PROJECTS/ROLES YOU CAN TALK ABOUT?
Yes, I’m working on a new series right now that I’m very excited about! It’s the story of your average millennial girl trying to balance school, friends, and life while hiding her new career as a Dominatrix from her muslim immigrant parents. Totally basic, right? It’s called “On Your Knees” and the reception has been absolutely amazing so far. I think it’s very timely. Even though it’s such a unique and extreme situation, it deals with very universal themes. At its core, it’s about a girl who has grown up caught between two different worlds and cultures. She’s trying to figure out who she is and where she belongs. It’s about her struggle to remain honest and authentic about all the parts of herself, including the parts that she might think would be easier to just sweep under the rug. I grew up in a muslim household, which is why this story is particularly relevant to me. We didn’t talk about things like sex or sexual health. It was such a major taboo and I had to find my own ways to learn about all of these things that were “forbidden”. Now, there is a major movement in the Middle East and within Arab Women’s culture, a movement to finally talk openly about sex and free female expression. I want to use my voice and experience to contribute positively to this movement and expand the conversation. I believe that with more exposure and acceptance comes greater understanding, and that’s something we can never have enough of.

How to Legally Start an Offshore Company in the UK?