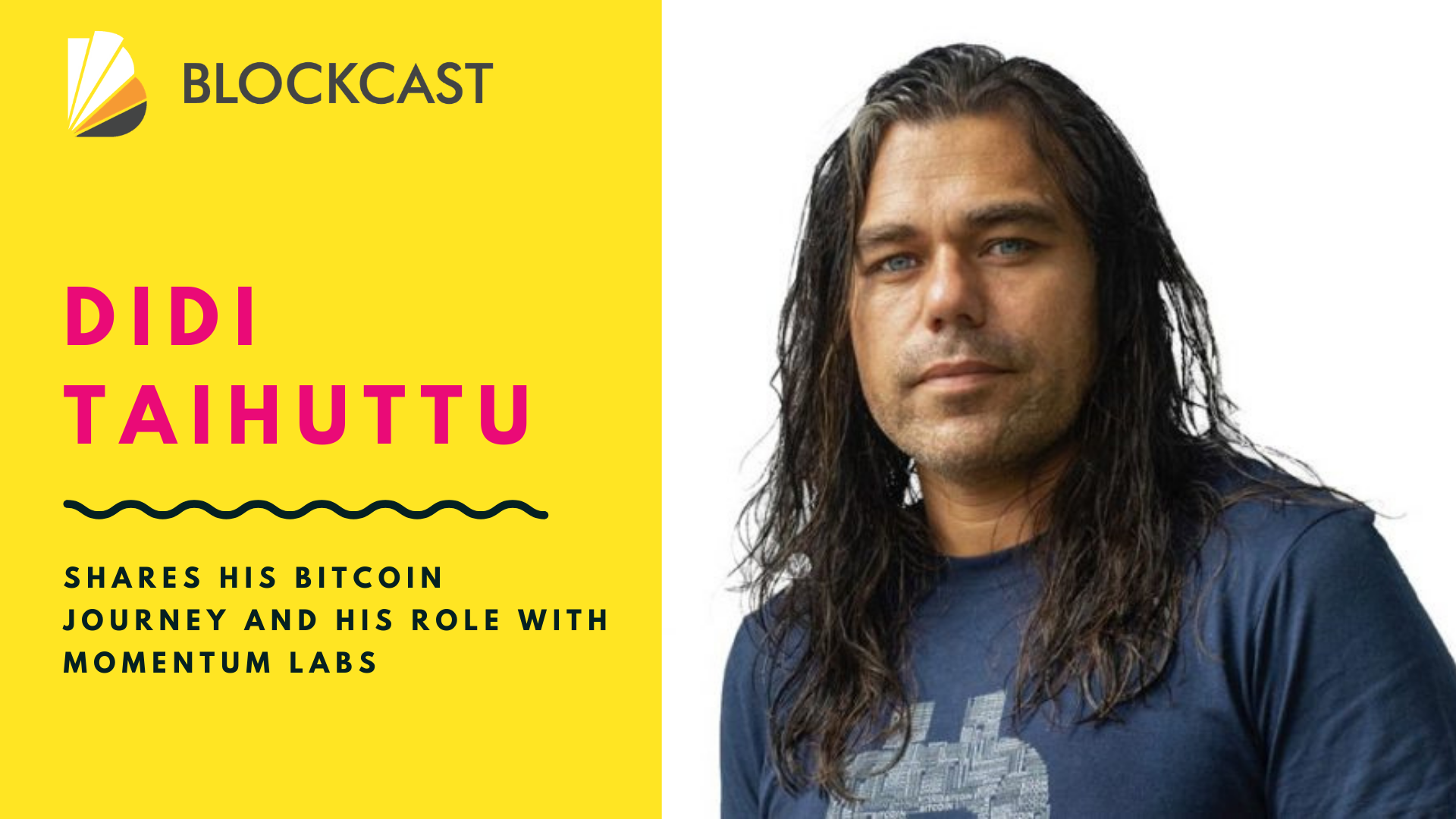 Blockcast.cc: My name is Jenny Zheng, cofounder of Blockcast.cc. And we have Didi Taihuttu, Founder of The Bitcoin Family and Ambassador to Momentum Labs with us this morning. Dear Didi, tell us more about your bitcoin journey?
Didi Taihuttu: That is a difficult question as our journey is almost 5 years now and we are still travelling the world all in Bitcoin. It all started in 2013 when I started mining Bitcoin and then went crazy when we decided to go all in 2017. We sold our house, companies, cars and literally everything we owned and invested all of it into Bitcoin. That is when the real emotional rollercoaster started for our family. We lived on a campsite for a few months but started to travel very soon after as the media flew from all over the world to film us and that was unbearable for the family in the beginning but after some time we just agreed to be the bitcoin family and support the revolution to the fullest 24/7.

Now 42 countries further we are in Mexico and living an all in crypto life as a speaker, writer, trader and much more. Yes, 2018 and 19 were difficult years as life cost us 1 to 2 bitcoins per month but nowadays life costs us 1 BTC per year!! This year is the Bull run and we are busy as f… Again 3 documentaries are created by Dutch, French and US television so busy times.

Blockcast.cc: What trends have you spotted lately for bitcoin?
Didi Taihuttu: Bitcoins is slowly evolving into the gold of the 21st century. You can see the billionaires like Michael Saylor, Elon Musk and many more entering the industry and they are entering for the long term to protect their capital from losses because of the upcoming crisis, insane money printing, inflation and other negative macroeconomic factors.

Those billionaire’s used to use gold as a safe haven or store of value but now slowly start to understand that Bitcoin is better than Gold and thus they will all switch bitcoin. We see the same global happening for governments. Don’t let them fool you with the stories of Bitcoin is not safe or costs too much electricity.

Most governments and countries want to be the biggest bitcoin miner. Countries like Iran, Venezuela, China and many more even incentivise their power plants to mine Bitcoin for longer than a year. Now they even announced that the country uses Bitcoin for import and export and so they surpass the US sanctions and the dollar. Do you see how big this is? China is the biggest bitcoin miner but the US, Russia, Europe, soon Africa and all other continents will join that competition and all want to become the biggest miner as buying bitcoin will become more and more difficult because of the halving etc. Central banks will create CBDS central banks digital currencies and I believe that they all already agreed on using bitcoin as the 21st-century gold that will back those CBDC. That’s why governments made is possible for banks to offer custodial services for BTC, billion-dollar companies to add BTC to their balance sheet etc. Compare it with the gold rush in the early days. There was a time everyone kept its gold in their own houses, they the fear was created by governments and banks that you could be robbed so people started to use banks as a custodial service for their gold and then years after gold even was forbidden in some countries it became the backup asset of the world currency. It is all repeating again hahahaha

Blockcast.cc: Do you think ETH or BNB will take over BTC’s position one day?
Didi Taihuttu: NO, they have different goals. People need to understand that BTC wants to replace money and gold and become a store of value that you at the same time can use as peer to peer cash or trade with. It’s the most unique asset that has ever existed. ETH, BNB and many other good blockchains and currencies are focused on decentralising other industries. So for me, bitcoin is king when it comes to the whole industry as it was the first, still is the strongest and all the others are amazing copies that use a similar technology to help us disrupt the far too centralised world we live in and by that bring back the power to the people. It is a Revolution for me but can also be seen and evolution to others. We are decentralising the world and powers while we create the next step in the evolution of money.

Blockcast.cc: Tell us more about your role with Momentum Labs.
Didi Taihuttu: I am already evolved in Momentum labs since 2018 when Sander introduced me to the idea. I really loved the idea as it is kinda changing the way we can exchange value without it needing to be money. Momentum Labs is a one-of-a-kind cognitive platform for loyalty programs implemented over a blockchain infrastructure. The platform harnesses the power of AI (Artificial Intelligence) to help businesses better understand customer behaviour, predict churn before it happens, and prevent it. Momentum Labs is set to revolutionize the world of retention marketing and customer loyalty. redefining the way companies build programs and manage relationships with their customers. It is targeting a 180 billion dollar industry. Just imagine in the far future being incentivise for the shopping or flying you do in the loyalty point that you hold in your app but being able to trade those loyalty points you earned by flying (air miles) to buy a coffee at Starbucks. Then again get loyalty point s for buying that coffee at Starbucks that you then again can use to get a discount while doing your groceries. Or even trade for other people loyalty points. Let’s say you are short of air miles to get a huge discount on a flight and another person is short of Gasoline points to get a huge discount for gas. You exchange the point with each other so you both have enough point for the thing you need it for. Now zoom out on the globe and see everyone doing this worldwide. That’s why I like momentum as they change the way we will exchange value.

Blockcast.cc: Do you think loyalty platforms work better with blockchain and AI-enabled platforms compared to the traditional rewards software. Share your thoughts.
Didi Taihuttu: Yes, I think the blockchain and cryptocurrencies are the tools that we as humanity were missing for the evolution of technology we were creating. Because of the blockchain Momentum could be built In a way that people will be able to exchange this loyalty point in a very transparent, fast and safe trustable way. Blockchain was the missing technology that now will revolutionise many industries and also the loyalty industry and MOMENTUM will be the leading company in doing so.

Blockcast.cc: Momentum token/ MMTM will be listed on Uniswap on the 10th of May 2021. What tips do you have for those who are supporting this token?
Didi Taihuttu: It’s going to be listed on the 10th of May on Uniswap and that is huge news as I am a guy that loves decentralised exchanges. Yes, I understand that it will possibly also listed on centralised exchanges in the future but I will use the decentralised ones hahaha. I advise people to do their own research and discover why it would be wise to buy MMTM tokens and HODL them for some time as I said they are revolutionising a 180 billion dollar industry and when they succeed the price of their token will increase just like the share prices of amazon increased after revolutionising the shopping industry. Again DYOR but to comfort you I did my research and there is a reason I am getting evolved in Momentum Labs.

Blockcast.cc: How long is this bull market going to last?
Didi Taihuttu: I believe the Bull market is going to top between September and December 2021. Then we will again see a bear market but I don’t think we will crash with 80% like the previous times as many smart investors will HODL at least till the 2025 Bull market TOP.

I also think that many people will use BTC or ETH as collateral for loans that they will use to live during the bear market or buy the BTC dip. So they multiply their BTC’s by using the BTC as collateral for a loan etc. Also, more and more people will use BTC or eth for staking to live of the high yields in the bear market and many other possibilities that are created by the DeFi industry. But remember I am just a longhair dude walking the beach so don’t take any of this as financial advice hahaha.

Blockcast.cc: Lastly please share an inspiring quote for our audiences.
Didi Taihuttu: Sure.

Life quote: Stop living in fear and greed as both will kill all your dreams!!

BTC quote: “Emancipate yourselves from financial slavery. None but ourselves can freeze our Bitcoin”

Blockcast.cc: Thanks Didi for your kind sharing. You can find out more about Momentum Labs at www.momentumlabs.ai. You can also read more about us at www.blockcast.cc.