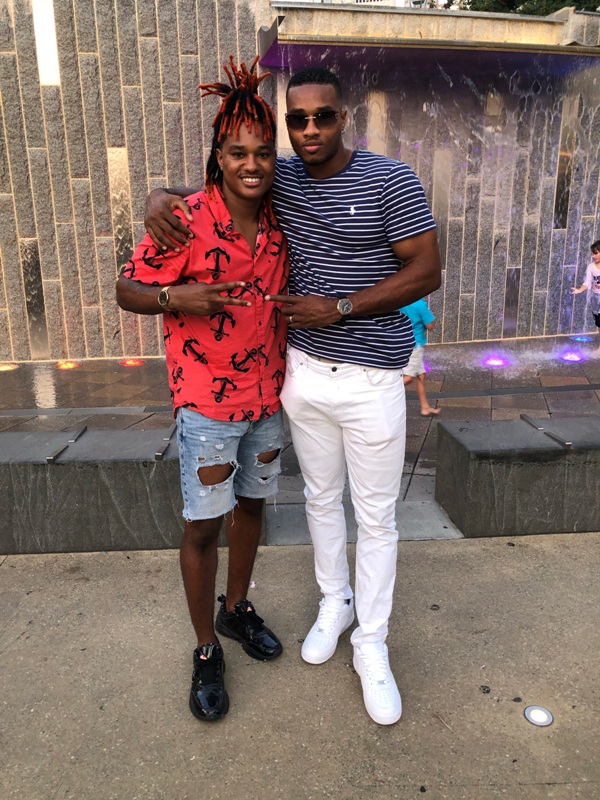 As a kid growing up in Atlanta, GA the family of 2 which were his mother “Sharima Brown, brother “Na’Quan Brown”. Sharima Brown’s plan was to take care of her sons along side dealing with her ex-husband “Barrett Stowe. She wanted to her sons to grow up to be successful through education and understanding life-hood principles by molding them into men at an early age in her singles parenting. During that time De’Shone and his older brother “Na’Quan Brown grew up in rough neighborhoods that became a struggle throughout childhood experience and the only way they figured to find a way out was playing football. De’Shone as a kid didn’t like sports, but as he matured he began to join his older brother in sports.

His brother was a star as a child, he started to build up his name being called “Allstar Brown”. Na”Quan was the head brother as the oldest child.

“My brother was like a father to me as a teen as we bother got older “. The only reason I give my brother his flowers early because he sacrificed as well as my mother did keep food on the table being the best version of a brother/father as he could during my mothers struggle with not having a job back in 2012. Before 2012, in 2010 De’Shone started to build up his name a football player as well. Everything started to gain as a teenager after seeing his brother being the lead of the house.

De’Shone Brown talked about how they lived in a couple of shelters growing up in Atlanta stating that “My mother always made sure we was token care of. My father wasn’t around so she was the man of the house. His mother became the single parent who provided everything and De’Shone didn’t understand why his father wasn’t around. It wasn’t what he expected as a child but he stood by his mother being the younger son in the family.

De’Shone said, “After seeing my mother struggling he will never forget where it all started from and I’m make my mother proud “.

Years later, in 2016 Sharima La’Shone Brown passed away from an anxiety attack at the age of 44 on January 9th, 2016. Things got real after the hardship family. This tragedy of the lost of De’Shone mother took a lot of sons. At the time of this tragic death of “Sharima Brown” his brother, Na’Quan studied at North Carolina University to finish up to graduate from college.

They always say blood is thicker than water, and still they are reaping all the blessings from God. The mother of “De’Shone Brown” and “Na”Quan Brown” are finally seeing and experiencing all the fruits from all the hard work they’ve accomplished overcoming every obstacle at an early age.

How to find a good egg donor