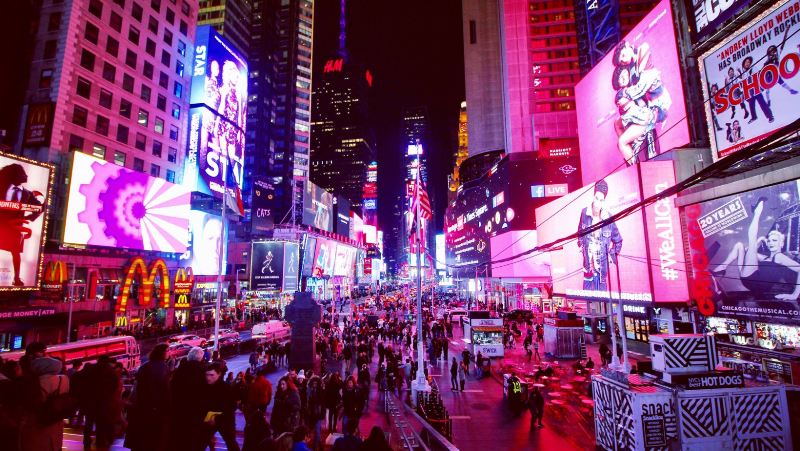 Cut Through the New York Chaos with Billboards

New York, New York—the City of Dreams, the City That Never Sleeps, and undoubtedly one of the most expensive cities in America. Consumer spending studies show that households in the New York metropolitan area spend an average of $75,275 per year. That’s over $13,000 more than households in other parts of the country. While the majority of New Yorkers’ income goes towards housing and food, a good portion of their income is allocated to entertainment, apparel, and services. With New Yorkers spending more than other Americans on a regular basis and NYC tourism slowly increasing post-Covid, the City of Dreams is the ideal place to advertise.

New York City, like many other urban environments, is an advertising hub. If you have walked the city’s streets, you will notice advertisements around every corner—plastered to walls, on buses, and on New York billboards in digital and traditional formats. Luckily, there is no shortage of places to advertise in this forward-thinking, fast-moving city. This page on New York billboards breaks down the average pricing and cost per mile (impressions) of typical New York ads. Read on if you want to find out where to advertise in New York and how to determine pricing for your ads—it will take just a few New York minutes.

You can find New York billboards, both digital and traditional, overlooking highways and major intersections in the city. While the largest billboard in Times Square might be out of your budget, there are other prominent areas filled with tourists that will cater to your audience. On average, a traditional billboard in New York costs about $2.5K while a digital billboard costs around $16K. Once you decide to go digital or traditional, your next step is to seek out a billboard company to determine the specific locations and prices that they offer.

The easiest way to do this is to work with an ad agency that can compare billboard companies and find you the best price. New York billboards are well worth the investment, too—a billboard in a prime location can receive up to two million impressions. You can even find billboards for relatively cheap—only $200 for a four-week campaign, though of course these are probably placed in spots with less foot traffic.

Other Types of New York Ads

It may seem strange to country dwellers, but furniture is a great ad location in urban areas like New York. New York City features plenty of street furniture and structures including bicycles, transit shelters, bus benches, kiosks, and newsstands. These cost $1.5k on average and can leave impressions on over seven million people.

Airports are great for advertising because consumers have nothing to do but look at their environment and notice ads. Like airports, bus benches and transit shelters are liminal spaces—locations where consumers do a lot of waiting. Additionally, consumers may be more likely to notice ads if they are on foot.

Wallscapes (printed murals laid out on walls), wildposting (a collection of overlapping posters), and bus or subway banners are also great advertising methods. When in New York, think big. The City of Dreams is always focused on the next big thing, so your ads should hop on trends and grab the attention of busy New Yorkers.

Does it matter where you place your billboard in NYC? Yes, it does. Just because your billboard is large doesn’t mean consumers will be able to see it. It may be hidden behind a skyscraper or tucked in the corner of two buildings, so it is absolutely imperative to check your billboard’s location before your ad is posted. There are four major highways in New York that are already home to a host of eye-catching ads. Consider the Gowanus Expressway, Queens Midtown Expressway, Cross Bronx Expressway, and Van Wyck Expressway if you want your New York billboards to really stand out.

If you’re not from New York, then you may not know how much pride New Yorkers take in their boroughs and their city. You may want to research all of the boroughs and common commuter routes in New York to determine which highway would best fit your target audience.

Areas with many tourists are ideal billboard locations—and that doesn’t just mean Times Square. You may want to place your billboard on a route for one of New York City’s major sightseeing tours like Circle Line Sightseeing Cruises or Free Tours by Foot. Liberty State Park and High Line Park are New York parks with a lot of tourist traffic.

If you’re looking to appeal to college students and academics, New York University, The New School, Columbia University, Suny Empire State College, and John Jay College of Criminal Justice are all in the heart of the city, along with many others. You may even want to place digital billboards or spectaculars in or near any of the three major airports frequented by tourists and New Yorkers alike—Newark Liberty International Airport in New Jersey, John F. Kennedy International Airport, and LaGuardia Airport.

New York City is full of bustling crowds and innovative marketing, and people can’t help but admire the digital billboards that have become an iconic symbol of the city. With these recommendations, hopefully your brand will soon be illuminated by those sparkling lights.

Gym Wear: Your Guide to Finding the Right One