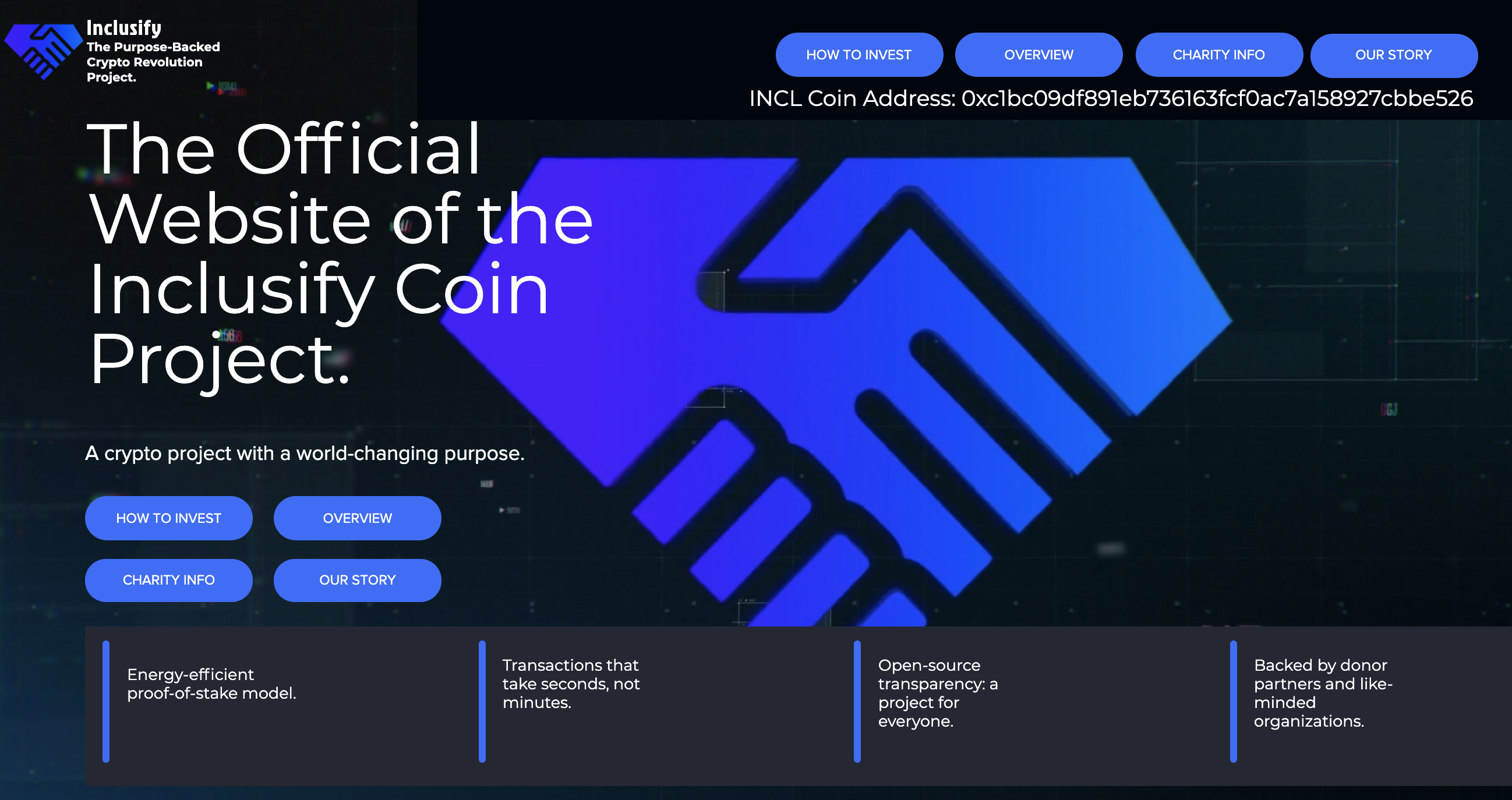 Cryptocurrency and Charity: A Recent Breakthrough and Opportunity in the Fight for Equality

Is making money for the sake of money enough? Crypto projects with a fundamental value can attract more investor attention, as they give them reason to make a difference. Charity cryptocurrencies – including a newly emerged Inclusify (INCL) – power a social impact movement, donating significant sums of money to philanthropic activities.

Will Inclusify manage to make a footprint in the development of blockchain social impact initiatives? It’s time to learn more about the project: https://www.inclusifycoin.com/

Inclusify (INCL) is a cryptocurrency token tradable on PancakeSwap, a cryptocurrency exchange that operates on the Binance Smart Chain. Inclusify was built as a crypto project that aims to power a social impact movement. This new ecosystem works by giving a small transaction fee to reward holders and donating a significant sum to philanthropic purposes.

Part of that fee is sent to the community on a month basis, proportional to the number of Inclusify tokens they hold. The majority of it goes to the multitude of charities Inclusify partners with, all of which aim at racial or sexual issues of some kind.

As of February 20, 2022, total Inclusify crypto charity donations amounted to $349,000, which the development team provided its financial verification of. The project raises money for various notable organizations, including Black Lives Matter, the ADL, and various LGBT and feminist groups.

Inclusify is a newborn cryptocurrency launched in late 2021 with one billion tokens. Coins with such large quantity are available at low prices on the outset, meaning early buyers can scoop up considerable market share and reap substantial rewards later with minimal upfront investment.

Is the Charity Crypto Coin Safe?

To prove its safety to potential investors, the cryptocurrency has undergone a security audit and keeps its bases covered as far as cybersecurity is concerned. Elongate received an 93% security score with no critical issues detected.

The single major concern was related to the risk of centralization. Certic pointed out that over time, a particular address can accumulate a significant portion of tokens. If the private key to this wallet is mishandled, it could cause negative consequences for the whole project.

The Inclusify team addressed the issue and resolved it:

“Inclusify’s business model is fundamentally based on extracting from the unlocked portion of the liquidity pool (LP) to facilitate transparent charitable donations. Our accumulated burn fund stabilizes the coin price by reducing supply incrementally and providing a capital pool to provide liquidity at all times. As with any business with routine operational costs, access to some capital is required. Inclusify is charity-first, so operations, not operators, are lean and fully transparent. As an additional risk mitigation, the leadership team is fully anonymized so that hackers can not target their information and hack into their holdings or the project’s operations in any way” said the team.

According to one Crypto.com analyst, the discussion on cryptocurrency philanthropy should start with risks rather than positives:

“The crypto industry, with weak regulation and a huge number of young and inexperienced investors, is a good breeding ground for all sorts of scam projects. Under the guise of a benefactor back in the ICO days, many charitable projects were launched that eventually just disappeared from the radar, along with investors’ money.”

The analyst also pointed out that even projects with real fundamental value and the ambition to do good pursue the main goal of monetizing their activity and making profit.

“There is no technology or innovation behind such projects, in contrast to the financial (DeFi) and legal (smart contracts) sectors, or, for example, NFTs, which are revolutionizing media, arts and entertainment. Simply put, you could launch a charity in the traditional way, so why complicate things and go into crypto? Except to raise capital from an audience that doesn’t exist in the traditional market. Otherwise, it’s the same business aiming to gain profit,” said the analyst.

Turning back to positives, the analyst admits that helping those in need – even through the prism of making your own profit – is a good initiative. He says:

“The Inclusify project is catchy because of its openness and publicity, as well as confirmation that they do provide support to various foundations. I think such projects lack the help of media persons. Imagine how the popularity of the project would soar if someone like Elon Musk publicly supported it, instead of tweeting about his dog Floki, which resulted in the eponymous token skyrocketing in value by thousands of percent.”

“Additionally, the fact that investors can actually profit through their charitable activity is a major breakthrough.

“Accordingly, if the project develops in media and not technologically or by trying to get listed on as many crypto exchanges as possible, perhaps the crypto market could finally get a decent, honest and truly working blockchain-based charity project,” concludes Capital.com’s analyst.

“All in all, my fair recommendation would be to consider a small speculative investment in Inclusify, but never invest more than you are willing to lose.”

Donate crypto to charity: Inclusify investment with an altruistic core

Who might be interested in Inclusify cryptocurrency, bearing in mind the competition from the enormous number of other crypto projects? According to project, it is those who want to make a positive difference from their crypto holdings by “marrying the personal incentive with the charitable act”.

Therefore, the crypto project can attract traders and investors interested in ESG (environmental, social, and governance) factors. Still, Inclusify is not the only charity cryptocurrency project around. However, it does have the fastest transaction times and strongest fundamental composite score of all similar ones we assessed.

According to the Charitable Giving Report by Blackbaud Institute, $40bn was raised online for charities in 2021. Bearing in mind that the overall cryptocurrency market holds around $2tn, crypto donations have room to grow. Further interconnection of charity and blockchain technology can boost these initiatives.

Blockchain technologies and projects like Inclusify can provide transparent tools for recipients and donors alike. However, you should conduct thorough due diligence before making a decision to participate in any charity crypto project to mitigate the risk of giving your money to fraudulent operators.

If you’re not ready to get involved in newly emerged crypto projects, you can consider trading well-established cryptocurrencies, including bitcoin (BTC), ethereum (ETH), or cardano (ADA) with contracts for difference (CFDs). Obviously, these established coins offer nowhere near the potential investment returns such as newer projects such as Inclusify, though.

HOW AND WHERE TO BUY INCLUSIFY CRYPTO TOKENS

ABTACH News Lights Up the IT Industry with Advance Solutions