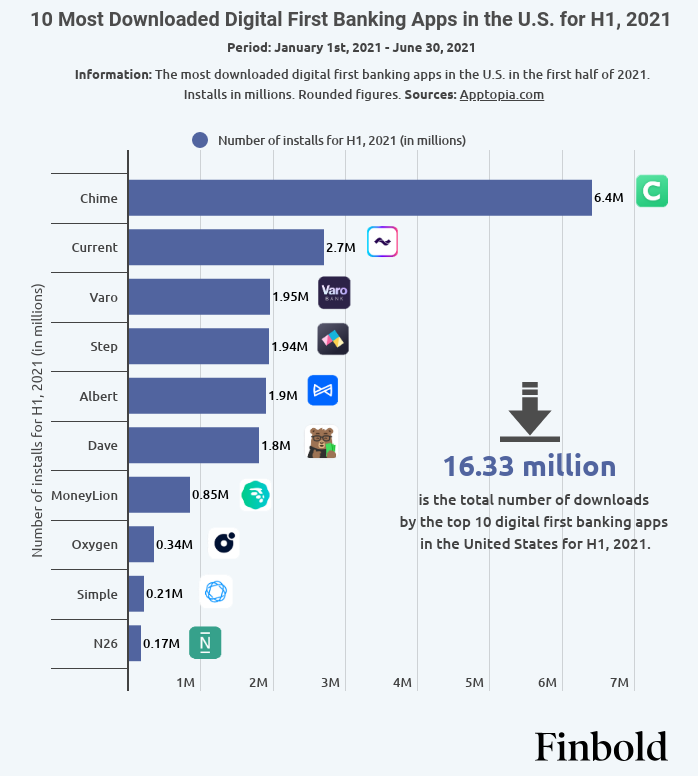 The United States challenger bank market is growing with competition building up between local and international entities. However, based on install figures, local neo-banks appear to be winning the race.

According to data acquired by Finbold, Chime was the most downloaded digital-first banking app in the U.S. in the first half of 2021, with 6.4 million new installs. Current ranks second at 2.7 million installs, followed by Varo at 1.95 million, while Step with 1.94 million installs ranks in the fourth spot. Albert occupies the fifth slot with 1.9 million.

Interestingly, Revolut, which went live in the U.S. in March 2020, emerged in the 11th spot, having dominated the EU market.

Digital banks grow amid the ability to process stimulus checks

The research highlights some of the drivers behind American challenger banks’ record number of installs compared to foreign competitors.

Furthermore, the research report identifies the position of the U.S. challenger market compared to global competitors. The report notes that:

“Notably, the challenger bank market in the United States is still gaining traction, and it’s been growing steadily. However, foreign entrants into the market appear to be struggling among local entities. This is an indication of growing competition in the sector.”

Moving into the future, challenger banks with sustained efforts to improve customer experience will likely dominate the U.S. market.

The Stars & Planets – How Does The Stars Affect Our Connections According To Relationship Guru of Malaysia, Sarah May Low

Microsoft’s Android stun: What this new telephone implies for the eventual fate…