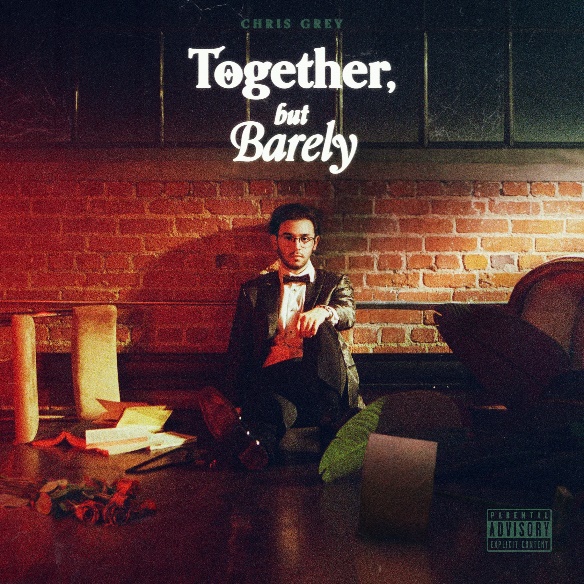 Today, Canadian singer-songwriter/producer Chris Grey released his new EP Together, but Barely, demonstrating his mastery of modern R&B and Pop, effortlessly weaving fragments of Rock, Hip Hop, and orchestral music into six intense and captivating tracks. It’s an innovative sound that Grey can proudly call his own and is highlighted by his unforgettable voice and signature falsetto.

LISTEN TO TOGETHER, BUT BARELY HERE

Before officially putting the title of “recording artist” at the top of his resume, the prolific 20-year-old racked up an enviable list of credits and millions of streams from the producer’s chair, including monster collabs with Brazilian stars Öwnboss & Zerky and Canadian hip-hop duo 88GLAM.

On Together, but Barely, Grey’s sound matures from his previous two EP releases into a fierce and impactful package.

Grey undertakes an intimate examination of the enigmatic phases of a new relationship on the EP, including the passionate rush (“Seamless”), trepidation (“I should be happy”), self-sabotage (“Collateral Damage”), and wistful goodbye (“Dancing on the Edge”).

Kicking off his newest release is “Seamless”, an emotionally charged and sensual track that has seen an enormous amount of success since its release as a single.

Buoyed by the combination of a Hollywood-inspired music video directed by Grey, a performance of the track on Grammy.com, and viral TikTok’s that garnered more than 4.5 million views, the song ultimately propelled to over one million streams on Spotify.

Opening with an alluring violin passage, Grey’s velvety-smooth falsetto vocals pair perfectly with the atmospheric production. The track builds up to an unexpected finale — with Chris’ vocals on the bridge eventually morphing into a punchy, guitar-riff-driven ending performed by Oscar Rangel, former live bassist for the iconic Canadian metal band Annihilator and current guitarist for symphonic metal band Operus.

One of the most introspective songs on the EP, “Are You Afraid of the Dark?”, sees Grey confront ghosts he had attempted to outrun.  The eerie and unique production with intimate whispers and melancholy vocals is grounded by a hard-hitting bass line throughout the track. “It’s a conversation with myself questioning why I’ve tried so hard to push stuff down instead of just facing it,” says Grey.

Three songs on the EP focus on different aspects of uncertainty and insecurity. On “Collateral Damage”, featuring Benny Mayne, Grey takes a frank look at how individuals can self-sabotage relationships. On “No More,” Grey pleads for the truth as he’s poised between caring and indifference and needs to know whether to move on. On “I should be happy,” Grey explores why he is inexplicably unhappy when everything is going well.

“I just came to this realization that sometimes I would feel guilty when I wasn’t happy even when I thought I should be and everyone around me seemed to be,” explains Grey. “Writing this song kind of gave me permission to just feel what I was feeling even if it didn’t make sense to me.”

Grey saves one of the EP’s most thrilling statements for last with “Dancing on the Edge,” a duet with singer-songwriter Allegra Jordyn. Driven by a pulsing bassline, replete with an 80’s worthy synth solo, “Dancing On the Edge” is the moment of accepting the inevitable ending of a relationship and coming to terms with that. Grey offers, “There is an understandable sadness but also a moment of savouring the last moments together.”

The video for the track, which he directed and edited, captures the irrefutable chemistry between Grey and Jordyn while at the same time evoking an aching poignancy.

WATCH THE VIDEO FOR “DANCING ON THE EDGE” HERE

Grey explores themes touching on vulnerability, love, and more in his songwriting, while succinctly capturing the mood he’s experiencing through his distinct melodies. The songs on Together, but Barely are sure to captivate listeners and secure his place in the spotlight as one of Canada’s most exciting new voices in R&B and Pop.