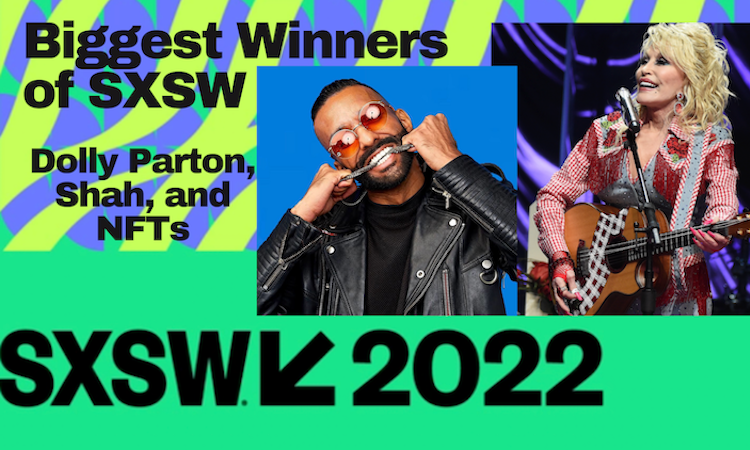 After a two year pandemic-enforced hiatus, SXSW returned to Austin, Texas with a bang! Here’s a round-up of the biggest winners and most buzzed about moments from SXSW 2022.

While SXSW is an event for discovering music’s new stars, the biggest name and the most sought after ticket of SXSW 2020 was undoubtedly Dolly Parton. The 76-year-old’s ability to command the attention of festival-goers who attend SXSW to discover the stars of tomorrow, not yesterday, demonstrates the extent of Parton’s legendary appeal. The buzz surrounding Parton’s debut at SXSW’s Friday night at ACL Live at the Moody Theater, also speaks to her  enduring relevance. Parton’s performance followed a panel discussion with best-selling novelist James Patterson, with whom she co-authored mystery novel Run, Rose, Run. Parton also launched her first NFT drop, Dollyverse, at SXSW with attendees of her Moody Theater appearance receiving a commemorative NFT.

While Austin and SXSW are most commonly associated with rock, country and folk, the artist with the most impactful and memorable SXSW 2022, was the rapper Shah. His appearances ranged from quintessential Austin shows on 6th Street such as Balanced Breakfast and Scumbag Season, to a headlining performance at the inaugural Kramer x Baker Fest at Circle Brewing. Shah’s most buzzed about performance was a secret show at 200 East 6th St, a nondescript building in the heart of SXSW’s action, that was arguably the most thrilling concert during SXSW 2022. Entry required back alley access and a virtual key, which became the most sought after ticket of SXSW’s Thursday night. Using clues from Shah’s instagram, the building appears to belong to Ibble, an Austin based start-up that fans noted Shah visited again the following day. While Shah’s whereabouts being tracked by fans hoping to attend his secret concerts illustrates the impact of his SXSW 2022, Shah’s growing star shone beyond SXSW’s music branch. At a SXSW film party, I learned of Ghostwriter, a forthcoming television series that will be starring Shah.

While music is the heart and sole of SXSW it is hard to argue that any entity dominated SXSW 2022 more than NFTs (non-fungible tokens). SXSW 2022 overflowed with NFT-centric panels, including one featuring Mark Zuckerburg stating he would “bring NFTs to Instagram in the near future.” NFT activations filled Austin during the daytime, as did NFT themed parties at night, including a Paris Hilton DJ set on Tuesday night at Green Light Social, where techies awkwardly collided with Paris Hilton fans.

While NFT’s might have been the only phenomenon more omni-present during SXSW 2022 than Dolly Parton and Shah, neither of the artists are strangers to NFTs. As mentioned, Dolly Parton announced her debut NFT launch at SXSW 2022. Following a party hosted by the Lazy Lions, considered a ‘blue chip’ NFT project, I learned Shah was announced as one of the first artists who will be appearing at NFT.NYC 2022, the world’s preeminent NFT event taking place this June in New York City. Shah’s involvement with NFTs has generated enthusiasm because his interest and presence are regarded as genuine, in contrast to other rappers who benefitted from allowing their name to be used to build hype in an NFT project before immediately exiting. While Dolly Parton does not appear to have been involved with NFT’s prior to the launch of Dollyverse, her decades long career of consistent authenticity helped ensure her project wasn’t viewed as a cash grab.

It’s also worth noting that amongst music journalists and music industry professionals present during the first half of SXSW 2022, before the concerts are fully underway, when the non-music streams such as technology and film dominate SXSW, there was a palpable disregard for NFTs accompanied by variations of “SXSW isn’t what it used to be.” Some believe NFTs to be a scam, while others simply can’t fathom the concept of paying for digital assets. However, SXSW has long bred innovation, from the early days of the internet, to social media, to cryptocurrency. As long as Austin is ‘The Live Music Capital Of The World’ music will not be displaced as the backbone of SXSW. And after two years of pandemic isolation, we should celebrate any opportunity where a legend like Dolly Parton, and a new star like Shah, give us a show for the ages.

Mateo Gribbly Shows Up On Time With “Muy Tarde”