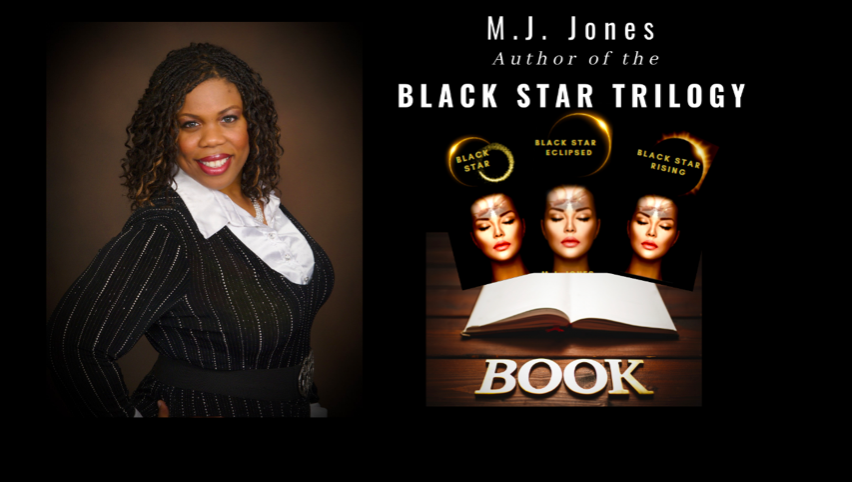 While the world was thrust into chaos during the pandemic, she started building a universe based on an alternate reality where mundane topics many people face today, are not prevalent. Instead, she decided on the one topic that mattered. No matter what universe you are in, no matter which society you are a part of, universally there is always a great divide between the Elite and the Poor.

“Black Star Trilogy” was inspired by M.J.’s revelation about the complexities of humanity as well as the “what if” scenario. What if this happened? What would you do? How would you change your circumstances to still be a beacon of hope, not only to yourself but to your child who has the responsibility to carry on future generations? M.J. explores the ability to become a “Black Star”- A Supernova. Through this metaphor, M.J. Jones illustrates the dynamism of power using an epic drama involving the titular characters Mia Black and her daughter Ashton (Ashe). Mia’s entire family and their unique world are filled with mystery, science, and history.

This talented American author, makes readers stop and think about the world in which they live and then stretches their minds and imagination at every iteration. She challenges her readers to stop viewing this world from a visual eye but to instead view this world with one’s mental eye. Coined a psychological thriller, this book series is “captivating and thought-provoking” as heralded by Literary Titan.

M.J. Jones takes her fans and readers on an amazing journey as she typifies contemporary issues across the globe, especially as it concerns diversity and power struggles. With her fantastical mind and thoughts, through medicine and technological advancements as well as through time and space, she deals with profound loss, mental health, insecurities, and growth; yet through her writing, she shines illustrating the undying spirit of humanity through a mother’s love. The mother throughout the trilogy teaches her daughter that it is selfish to only think about one’s own impact on society.

This book series attempts to balance the struggles of parents, at the same time educating children to be leaders, while still staying true to the lore of comic books, and fantasy, all rolled up into a fantastic tale of hope.

In the Black Star Trilogy, her characters navigate their alternative reality, where things are not quite a mirror image of our world.

M.J. hopes that people will use her series as an escape from their own worries; that her example will inspire parents who lost their passion to remember their creativity, and more importantly, through reading this series, people will think and reason and allow silo perspectives to be widened. “We are all the same no matter where in the world or universe we are, we all have experiences and viewpoints that need to be heard. We all have value and deserve love and respect.”