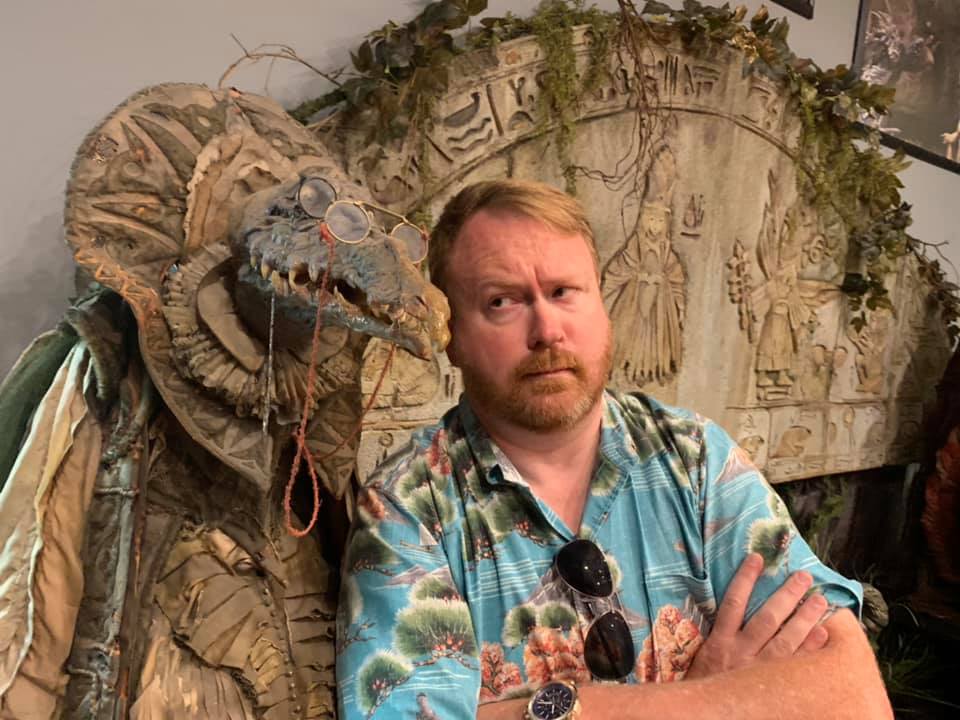 Character Actor Greg Tally has appeared on television and in dozens of movies and audio plays. His comedy group, The Damn Dirty-Drive Inn, won a Rondo Hatton award for best horror podcast. Tally is co-owner of both a dinosaur-themed hotel and a wine country inn surrounded by vineyards. He splits his schedule between Los Angeles, Colorado and various movie sets.

HI GREG, WELCOME TO ABOUT INSIDER! THANKS FOR TAKING THE TIME TO CHAT WITH US! CAN YOU TELL US A LITTLE BIT ABOUT YOURSELF, WHO IS GREG TALLY IN YOUR OWN WORDS?
I like to play villains, jerks, schmucks and comedic fools. So many actors fall into the “Olin Mills Glamor Shots” approach to acting (that’s the defunct Sears portrait studios, for all you kids who aren’t incredibly old like me). They want to be dashing and exotic and beautiful and handsome and glam at all times. But it’s not a particularly interesting choice or even authentic to the story telling. Save that for the red carpet. Give me a role that’s complex, real or memorable, any day.
Outside of acting, I love my kids and the Rocky Mountains and I like to travel, cook and write. The reality of my day to day is fairly quiet. When I’m home, I’m a semi hermit in the wilderness amid my moose and elk and deer. It’s splendid isolation.

WHAT INITIALLY SPARKED YOUR INTEREST IN ACTING?
I got interested in acting by bingeing on pop culture. And baked into all those movies and cartoons was the romance of songs like “There’s No Business Like Show Business” and “Hooray For Hollywood!” Selling the dream of acting. My parents were big Broadway buffs. They took me to see the second night of “Into the Woods” with Bernadette Peters during its original run. And the more obscure Peters show, “Song and Dance.” I was obsessed with “Cats” after seeing it at The Wintergarden Theater. So much so, we stayed at the Russel Hotel in London for a memorable West End vacation to see “Starlight Express,” “Lend Me A Tenor,” and “Noises Off.” I played my “Cats” album into the ground on my dad’s hi-fi record player. My kids only know the show ironically through the movie as an object of ridicule. It’s not something that translated well for their generation. But it was a foundation of me eventually attending a performing arts high school, acting in college, and later acting in audio plays and movies.

TELL US ABOUT YOUR EXPERIENCE AUTHORING “THE BROKEN POT: A LOST GREEK COMEDY OF ARISTOPHANES.”
I have to back up a little bit and explain the Damn Dirty Drive-In, my virtual theater troupe and comedy group out of Denver, Colorado. It was a group of actors and writers who wrote a series of old timey “radio plays” for podcast consumption. It was heavily influenced by “Saturday Night Live,” “Black Adder,” Monty Python, Mel Brooks and MAD Magazine. The great satirists and sketch comedians of our childhoods. Not to mention old cassette recordings of the Golden Age of Radio my parents used to play on long car trips. There were about twenty of us, all amateurs, but the core writer’s room was author Ryan Smith, standup comic Robb Maynard and myself. We had started as a long form interview podcast covering “Mystery Science Theater 3000,” and we interviewed practically the entire cast and crew of MST3K down to the grip and best boy. But we also did artisan soda reviews and comedy segments, and at some point, audio plays got thrown into the mix, into rotation.
Robb, Ryan and I were insanely prolific, churning out upwards of 16 feature length productions in a little over three years, like one every six weeks. Parodies and serials and sketches and anthologies and mashups. We built a podcast studio in the old owner’s apartment at one of my hotels. We started in Halloween 2017 with our send up of “War of the Worlds,” with satirical radio commercials. And we acted, recorded and edited the plays, adding in foley and royalty free music and sound effects, learning and growing as we went. Our friends contributed from all over the world, and we edited the master recordings to sound like we were all performing in the same room together. The “A Team” of writers mostly focused on the main script, and the “B Team” on the hammy commercials.
This tradition of show-appropriate radio spots continued into “Soylent Scrooge: Or Christmas Is Made of People.” And I am such a huge history nerd, we took our anarchy into anachronistic places pre-radio and pre-Marconi, with Victorian commercials. Then came Elizabethan commercials. It was madness. But it was also great fun. Robb’s jingle for his “Roanoke Recruitment Ad” stands out. (Who would have thought to rhyme “Roanoke” and “poison oak?” Brilliant, brilliant stuff). We eventually paired back and phased out the spoof ads because they were padding our run times and slowing down narrative flow. But I always had a great fondness for this form of sketch comedy. I carried the tradition forward into “The Broken Pot,” with ads shilling products from Ancient Greece and the Hellenistic world.
Between goofy Greek radio spots, “The Broken Pot” pivots on the death of Aeschylus, who was killed by blunt force trauma when a turtle was dropped on his head by a startled eagle. (Look it up)! I set the play during the 32nd Annual Citywide Dionysian Drama Festival in Athens, in the month of Elaphebolion, and the beginning of spring. I imagined playwrights Sophocles, Euripides, and Aristophanes as best buds. It’s a who’s who of the Golden Age of Athens of which ancient celebrities show up. The jokes skew a little ribald, and one of my writer colleagues describes “Broken Pot” as “Dirty Hercules,” referring to the Disney movie. Same sort of madcap zeitgeist, only extremely filthy. The play is in development hell, as in I got so busy making movies, I need to catch up on my dusty backlog of audio plays.

HOW TOUGH OR EASY IT IS TO CO-AUTHOR A RADIO PLAY LIKE “SOYLENT SCROOGE: OR CHRISTMAS IS MADE OF PEOPLE?”
When your writing partner is Ryan Smith, it’s not difficult at all. He’s written so many plays and detective novels like “Goodbye Angel,” that he’s efficient and quick and a workhorse. We can turn out a feature length first draft in about two weeks. And it doesn’t hurt when your writing partners are effing brilliant. I’m no intellectual slouch. But between Robb, Ryan and me, I was the dummy. We pushed each other in friendly competition (and sometimes heated arguments).
Ryan wrote a version of “Plan 9 From Outer Space” in iambic pentameter, where we reimagined Ed Wood as The Immortal Bard. (Thus, the Elizabethan radio spots) – “The Tragicall Historie of Plan the IX.” Not to be outdone, in an Alfred Hitchcock parody, Robb reimagined, “Strangers On A Train” in anapestic tetrameter as a Dr. Suess vehicle, “Non-Acquainyances on the Conveyances.” Which may be the single cleverest piece of writing to ever come out of the Damn Dirty Drive-In. But there was this constant back and forth to see who could do better.
Anyway, “Soylent Scrooge” is a dark comedy that reimagines Charles Dickins’s “A Christmas Carol” as if the British Empire went full on cannibal. It’s a “howdunnit,” not a “whodunit,” since the big reveal is in the title itself. We just have to walk the audience into how the Victorians started en masse eating people. Ryan and I moved ole Scrooge and Marley from a counting house to a canning factory in the 1890s. We threw into the blender a fistful of other Dickins characters from his collected works, broke the fourth wall more than Deadpool, along with other general silliness. And of course, radio ads!

WHO OR WHAT MOTIVATES YOUR CREATIVITY?
My ambition plays a huge part in this, as does my love of being behind the microphone and on camera. And also, my love of collaboration, and performing and creating with my friends. And of course, my strongly competitive nature. Usually my creative process starts literally with a title, then brainstorming names and characters and story arcs. Sometimes, this includes choosing music from a royalty free web site like Pond5. But if I can picture the contours of a story, then I can outline it. Then it’s sort of paint by numbers from there, and letting the writing help you discover the bits in between.

YOU DO A LOT OF THINGS, FROM AUTHORING RADIO PLAYS TO OWNING A HOTEL; WHICH ONE IS YOUR FAVORITE WORK?
My children, Caroline and Joseph, are my proudest achievements. They are witty, irreverent, hyper-intelligent, delightfully weird, kind and empathetic. I love them dearly, and the world would be a better place with more people like them.

WHAT’S SOMETHING WE SHOULD KNOW ABOUT YOU THAT MIGHT SURPRISE US?
When I had a root canal a few years back, the surgeon flipped me waaaay back in the chair in a position normally reserved for waterboarding, and took some X-Rays. He came back and showed me that I have a third row of teeth embedded in my soft palate. They’re like half formed Tic Tacs behind my adult teeth. So essentially, I’m a human shark or T-Rex. Rawr!

ANY UPCOMING PROJECTS/ROLES YOU CAN TALK ABOUT?
I’m scouting a pirate movie in the Caribbean early next year with my producer colleagues. And in January 2023, I’m headed with a camera team to London to film B Roll for “Soylent Scrooge.” The audio script is currently being developed into a screenplay. I’m very determined to see this project through. I have a couple of shorts I’m submitting to the Festival de Cannes 2023. And I may be developing a Western with Joe Estevez, who is one of my heroes from MST3K. And I am extremely excited to unleash Midnight the Goth Guy on the world in “Bermuda Island,” and Mustela the Big Bad in “Devil’s Knight.” Both roles were huge, meaty steak dinners for an actor to perform. But there’s a singular horror movie I am super stoked to be in: “A Bad Egg.” I get to play the creepy anti-hero, a clairvoyant carnival performer named Professor Tin Man. It’s a stand out, for sure!

WHAT IS ONE MESSAGE THAT YOU WOULD LIKE TO GIVE TO YOUR FANS?
Of course. Mom, thank you for being my one fan. But I have notes: That pot roast you made me was super tasty. Next time though, more carrots in the gravy. And don’t forget and turn the oven off this time! That’s dangerous! OK? OK. Sheesh. Eighty-four year olds.

WHERE CAN OUR READERS FIND YOU ONLINE?
There’s several places. The Damn Dirty Drive-In and all its radio plays are still available on Soundcloud and at iTunes. Also, you can find me on Instagram at @TehRedMenace, and on IMDb at www.imdb.me/GregTally.

A Simple Guide to Installing a Bathtub: Installing the Freestanding Tub

Understanding the Responsibilities of a Security Personnel