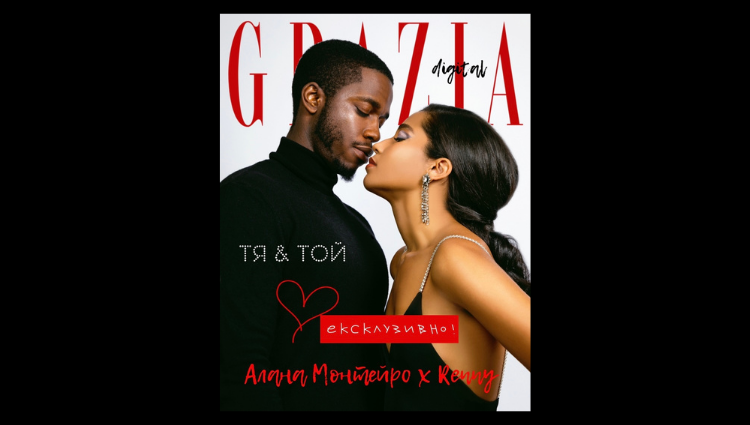 The Valentines cover of Bulgaria’s Grazia Magazine reads as follows: GRAZIA celebrates Valentine’s Day with a special digital cover and an even more special exclusive meeting.” Say no more!

On Sunday, the supermodel and the comedian both teased a photograph on Instagram from their forthcoming cover of Grazia. In it, Renny, 25, wearing a black turtleneck gazes down at Alana Monteiro 23, who wears diamonds and a delicate little black dress. Monteiro, looks back up at Renny with a lovingly and reverently stare.

Grazia describes their cover stars as “enjoying life and love with each other.” Naturally, as the cover was also released on valentine’s day, the relationship and possible engagement rumors between the couple (with over 2.7 million combined Instagram Followers between the pair) are swirling across social media.

The young couple met back in 2016 backstage at one of Renny’s live comedy shows. Since their initial meeting, they remained friends until going on a first date in 2017. Their first date was coincidentally in the same restaurant as Karrueche Tran and Victor Cruz. Now with their latest cover it appears they have (finally!) made their relationship official.

Alana Monteiro has fronted campaigns for Covergirl, Vogue, L’Officiel and more over the course of her modeling career. Renny is a social media sensation and TV star who appeared on MTV’s Wildn’Out Show with Nick Cannon.

You can check out their cover, interview and spread here on: Bulgaria’s Grazia Magazine and to know more about Renny & Alana Monteiro don’t forget to follow them on Instagram @renny and @alanaamonteiro_

Making Money During Summer as a College Student