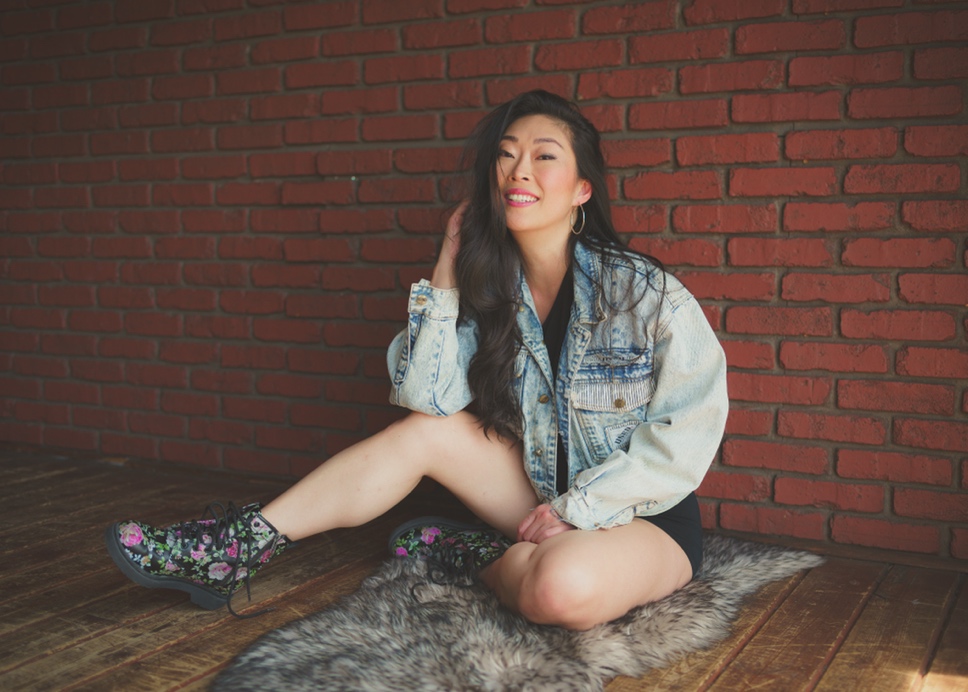 Jackie Dallas is an actress best known for her roles on the breakout hit series Stranger Things, as well 13 Reasons Why, Criminal Minds, and over a dozen other shows and films.

HI JACKIE, WELCOME TO ABOUT INSIDER! THANKS FOR TAKING THE TIME TO CHAT WITH US! CAN YOU TELL US A LITTLE BIT ABOUT YOURSELF, WHO IS JACKIE DALLAS IN YOUR OWN WORDS?
Hi! And thank you so much for the invitation! I would say that I’m an actress who is so grateful for the chance to be pursuing her dreams in LA. Outside of being an actress, I’m a bit of a goofball, I love to travel and my favorite thing to do is go out to restaurants with the people closest to me.

TELL US ABOUT YOUR JOURNEY FROM A MEDICAL DOCTOR TRAINED IN SURGERY AND PATHOLOGY TO AN ACTOR.
I’d like to say that I was taking the toll road towards success and stability and decided to detour onto the scenic route less travelled. Lol! I always loved acting and performing, but never thought it could be a real job. Going into a career in medicine was not much of a decision as it was the future that was expected growing up in a family of doctors… but I will say that I did it my way. I discovered that there were medical schools in the Caribbean and so decided that if I was going to spend the next few years after college still studying textbooks, I might as well do it on a beach. When I graduated, I spent a year doing clinical research and publishing papers before going on to do an internship in surgery in New York City. Surgery was exciting and very interesting to me, but was extremely demanding with grueling hours and little sleep in a high stress environment. I loved a lot about it, but knew myself enough to know that I would burn out if I wasn’t able to have more personal time to recharge. So I switched to pathology in Chicago, which is still anatomy based, but with a much better work life balance. However, after a few years of that, I was bored. I have a personality that craves different experiences and activities and spending my days looking at slides under a microscope wasn’t giving me the gratification I wanted, even if I could spend my nights and weekends doing other things. Gradually, I started dipping my toe back into acting. Little by little, starting off doing background work, student films and indies, I fell back in love with it and rediscovered a passion I wanted in my life. As fate would have it, my fiancé at the time, now husband, got a job out in California. After some discussion and soul searching, we decided to take a leap of faith and move to California to pursue acting and see what would happen.

WHAT WAS YOUR FIRST ROLE?
My first professional role was a small role on an unknown new series by a couple of directors with only a couple shows under their belt. That show went on to become the phenomenon that is Stranger Things and it changed my life. Even now, I cannot believe how lucky I was to have that as my first on screen role.

HOW IS THE EXPERIENCE OF SHARING THE SCREEN WITH HOLLYWOOD A-LISTERS LIKE MORGAN FREEMAN AND JULIETTE BINOCHE?
Intimidating, inspiring and humbling all at once. They are legends who have worked on hundreds of films, with thousands of other actors and have won Academy Awards. It boggles my mind that there were people out there who saw my 2 minute audition tape and said to themselves “yup, Jackie can hold her own next to them.” But when I got there, Juliette was so nice. She came up and introduced herself to me and was very welcoming. There was some physicality between our characters and it really made the scene much easier with her having been the one to break the ice. One thing that really impressed me was that both of them, were consummate professionals. From the moment they arrived on set, they were ready, attentive and engaged, giving the scene, the director and their scene partners everything they could to make it as good as it could be. Watching them work, I learned so much about what makes an actor great both on the screen and off.

YOU ARE AN AWARD-WINNING ACTRESS BEST KNOWN FOR HER ROLES ON POPULAR SHOWS SUCH AS STRANGER THINGS, 13 REASONS WHY, CRIMINAL MINDS: HOW DO YOU FEEL WHEN YOU HEAR PEOPLE APPRECIATING YOUR WORK?
It makes me feel proud. They say you should never go into acting if you need the approval of others, because that’s something you may never get.. But I think most creatives can’t help but want to be seen and valued. We are all artists and need an audience to tell our stories to, otherwise, what’s the point? And while you definitely need a tough skin to deflect criticisms, rejections and blatant meanness, we are all sensitive to how we are received. When I hear people praise the projects I’ve worked on, I get excited knowing that I had the chance to be a part of that world. When I hear them talk about the characters I’ve played, I feel so happy to know that I was able to contribute something memorable. And if I get approached or acknowledged about my work as an actress, I feel proud, knowing that all the work, time and efforts that I have put into my craft has paid off, and that little by little, I am doing my part to help move the needle of representation and diversity in Hollywood.

WHICH ROLE THAT YOU HAVE PLAYED YOU LIKE THE MOST?
Every role has been a dream to play for different reasons, but some of my favorite roles are the ones that really push me to do something different. My role on Paradise Highway is a recent favorite, not only because of the people I got to work with, but also because I got to play a type of character that I rarely get cast as. A woman at a rural truck stop bar who seems sweet on the outside, but then quickly turns heartless and violent. It’s always fun to play a bad guy.

WHAT TYPE OF ROLE DO YOU SEE YOURSELF PLAYING IN THE FUTURE?
I always love new experiences and a good challenge and would love to see myself in a genre project that I haven’t done before. I’m a big fan of fantasy, scifi and adventure, and I would love to immerse myself in a different world as a strong willed character that’s not necessarily good or evil, but complicated.

ANY UPCOMING PROJECTS/ROLES YOU CAN TALK ABOUT?
I have a small role in an upcoming limited series called Expats coming out starring Nicole Kidman and Brian Tee. I’m not sure how much I can say about it yet, but it’s another fun role that I’m very much looking forward to. It’s based on a book by Janice Lee and was directed by Lulu Wang, who was a bucket list director for me ever since I saw The Farewell.

Another project that I’m excited for is a short film called ‘Retribution’ which stars Emmy winning actor Nikolay Moss. It’s an action thriller where I play a hard nosed detective, and it was shot entirely on 35 mm. I believe the plan will be to submit it to the film festivals and I can’t wait to see how much people will enjoy it!

A final and more personal project that I’ve got is a fun true crime podcast that I cohost with one of my best friends. It’s called ‘2 Girls 1 Crime’ and it’s essentially just us eating and drinking our way through a true crime story each episode. It started out as a fun excuse for us to have a girl sleepover in our 30s, but we cranked out 22 episodes in Season 1 and now, having made some huge improvements for Season 2, can’t wait to see how far it goes! It’s available on YouTube, Spotify and iTunes… but I’m partial to the YouTube channel because we’re pretty fun to watch!

WHAT ELSE DO YOU WANT YOUR FANS TO KNOW?
I love and appreciate you all! One of my favorite things to do is to travel to different comic conventions and meeting so many cool and passionate people! If you happen to be at a convention I’m at, come by and say hi! I’d love to meet you and we can talk about your favorite shows and characters… I’ve got some great set stories that I probably can’t publish, but love to share! And one final note that I always feel compelled to say… If you have something that you are passionate about, or a dream that you want to pursue… do it. It’s never too late and if you work towards something you love long enough and hard enough, success and happiness will find you. I promise.

WHERE CAN OUR READERS FIND YOU ONLINE?
I’m on twitter @jaxdallasand Instagram @jaxdallas.
I also have a facebook page under Jackie Dallas.
And if anyone is interested in my true crime podcast, you can find everything at linktr.ee/2girls1crime.

5 Things to Know Before Getting Your First Credit Card

3 Applications of PCBs in the Healthcare Industry