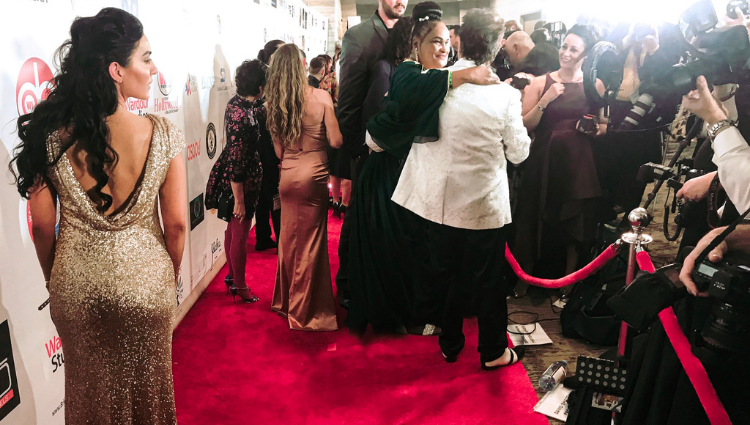 Zhaleh Vossough is a multi-lingual & multi-ethnic actress and model. Zhaleh has won multiple awards for theatrical performances in period plays, including a performance as Constance in Shakespeare’s King John. She’s appeared in multiple short films and episodic new media series, and has strong comedic chops thanks to a background of sketch comedy and improvisation.

In addition to her acting career, Zhaleh earned a Juris Doctor, graduated in the top of her class from Loyola Law School, and is a licensed practicing attorney in the state of California. Prior to this, she graduated from University of Arizona with a major in Psychology and a triple minor, all the while pursuing her career in acting with frequent trips to Los Angeles and a modeling career out of Phoenix, Arizona.

Zhaleh’s roles extend both in front of and behind the camera – she was a producing partner with Gearmark Pictures for over 3 years, and has produced on multiple projects commercially and theatrically, utilizing her experience in entertainment and law to mold her into a one-woman powerhouse.

HELLO ZHALEH! CAN YOU TELL US A LITTLE BIT ABOUT YOURSELF?
I was born into two vastly different cultures to a Persian father and an ethnically diverse mother of mixed Mediterranean and Native American descent. I began my story on a stage, like many young actors do. I was six, performing in an interactive, gaslight theatre rendition of Robin Hood (a comedy). But it wasn’t then, with all the laughter from the audience about the deadpan-faced child playing a moody Sheriff of Nottingham, that I fell in love with performing. Since I could crawl, my mission was to entertain people and make people laugh as a character in some movie or book. My favorite starring role was in a saga I began at age 3 as the family dog, a role full of barking at family, chasing my tail, and scratching my ear until I could channel that into theatre performances in school. Since then, something in my heart always made me feel home on a stage, or in front of a camera.

However, my love for academia coupled with stories of how so little made it in acting led me on a life of educational achievement. I put all of my drive into schooling, taking extracurriculars and becoming the “star” student versus the star of my own dream. I fought that dream my whole life, leaving an application to UCLA’s undergraduate theatre and film school incomplete, and instead a double major and triple minor filled my college years. I continued to find myself in performances, commercials, and modeling gigs throughout undergraduate years until I finally realized my dream could not go ignored. I decided to pursue the most theatrical academia possible – law and the life of a lawyer, while simultaneously moving to Los Angeles to pursue my dream of acting.

Dual careers of law and entertainment in a city full of possibilities is where we’re at in this story. I’m both a lawyer, and an actress (and have played both roles in one as a producer as well). My dream has been to build my own production company, sign the contracts, star in the pictures, and inspire others to believe that they can accomplish anything they set their heart on – even the impossible.

HOW DID YOU GET INVOLVED IN ACTING?
I started off young on a stage at six, performing in an interactive, gaslight theatre rendition of Robin Hood (a comedy). I went on in middle school and high school to place in regional and national Shakespeare awards, but continued to struggle on how to be secure financially if I pursued acting. And so I decided to move to Los Angeles and simultaneously pursue acting and law.

WHERE DO YOU FIND YOUR ARTISTIC INSPIRATION?
From books, from other storytellers, and from people watching – I loveeee people watching, in the most non-creepy sounding way possible! Seeing people in free, uninhibited states at the park, on a walk, with loved ones at a cafe, it’s so refreshing.

WHAT ARE YOUR STRONG POINTS AS AN ACTOR?
You’d have to tell me! I’ve heard I have an emotional depth that’s rare and will win me awards from Larry Moss, and I’ve heard my knack for comedy combined with my look is also rare.

WHAT MAKES A GOOD SCENE PARTNER?
I’m always available and listening. I’ll help you get where you need to be emotionally.

WHAT’S CHALLENGING ABOUT BRINGING A SCRIPT TO LIFE?
For me, it’s wanting to get the storytelling right, I’m too much of a perfectionist. The best lens is wide, stepping back to see the whole story, the journey your character takes, and where they end up.

YOU ARE POPULAR ON SOCIAL MEDIA, WHAT IS THAT ONE THING THAT YOU ALWAYS KEEP IN YOUR MIND WHILE PREPARING YOUR CONTENT FOR INSTAGRAM?
Integrity and inspiration. Especially as a lawyer, it’s not easy to fight the “easy fame” route of bare skin. No shame, women’s bodies should be praised, but I’d rather inspire little girls there’s more out there than self-exploitation, like being a lawyer, activist, independent woman, etc., otherwise we end up reverting back to gender norms. Also, if I don’t like something, I’m not going to pretend I do. I see so many influencers posting favorite products and I really don’t know if they even tried it, or just got sent it for free. Endorsements are appreciated, but at what point is it too much? Integrity and inspiration.

IF SOMEONE IS GOING TO MAKE YOUR LIFE INTO A MOVIE, WHO WOULD PLAY YOU?
Gal Gadot, Mila Kunis, and Kate Winslett all in one.

ANYTHING ELSE YOU WOULD LIKE TO SHARE WITH OUR READERS?
Just remember to believe in yourself. Be the star student, the star player, the star actor/actress, all in your own movie. Don’t let anyone, including yourself, tell you it’s impossible. Because it’s not.

Karema McGhee with LUXINOUS on dismantling the stereotypes of Saging